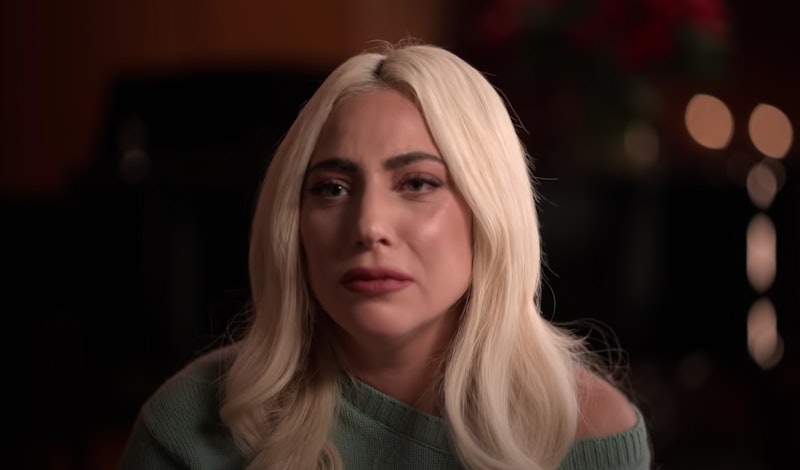 Lady Gaga is opening up about past trauma. During an appearance on Prince Harry and Oprah’s new Apple TV+ docuseries, The Me You Can’t See, the pop star spoke candidly about being sexually assaulted by an unnamed music producer when she was a teenager. “I was 19 years old, and I was working in the business, and a producer said to me, ‘Take your clothes off,’” she recalled. “And I said ‘no.’ And I left, and they told me they were going to burn all of my music. And they didn’t stop. They didn’t stop asking me, and I just froze and ... I don’t even remember.’”

Now 35, the singer went on to explain that she blacked out during the assault and was left with lingering physical and emotional pain that she’s still coping with more than 15 years later. “I was sick for weeks and weeks and weeks and weeks after, and I realized that it was the same pain that I felt when the person who raped me dropped me off pregnant on a corner,” she said. She also revealed she had a “total psychotic break” and was diagnosed with post-traumatic stress disorder. “For a couple years, I was not the same girl,” she added. “The way that I feel when I feel pain was how I felt after I was raped. I’ve had so many MRIs and scans where they don’t find nothing. But your body remembers.”

The “Rain On Me” singer also said that opening up about something so painful isn’t easy. “I don’t tell this story for my own self-service, because, to be honest, it’s hard to tell,” she admitted. “I feel a lot of shame about it. How do I explain to people that I have privilege, I’ve got money, I’ve got power, and I’m miserable? How do you do that?” Rather than self-pity, the pop star wants people to have compassion for those who are hurting. “I’m not here to tell my story to you because I want anybody to cry for me. I’m good,” she continued. “But open your heart up for somebody else. Because I’m telling you, I’ve been through it and people need help.”

For Gaga, being able to talk to people about her trauma has been part of the healing process. In 2014, she told Howard Stern that if she ever confronted her rapist, it would “terrify” and “paralyze” her. “I saw him one time in a store and I was so paralyzed by fear. Because it wasn’t until I was a little bit older that I went, ‘Wow, that was really messed up,’” she recalled. Like many survivors, it wasn’t until years later that she realized the severe impact of that experience. “It happens every day and it’s really scary and it’s sad and you know, it didn’t affect me as much right after as it did about four or five years later,” she said. “It was so hard.”

Last year, Gaga dug into her past again during an interview with Oprah for her 2020 Vision: Your Life In Focus tour. “I was raped repeatedly when I was 19 years old, and I also developed PTSD as a result of being raped and also not processing that trauma,” she told the famous TV personality, adding that she never had a doctor or therapist to help her cope with the pain. “I all of a sudden became a star and was traveling the world going from hotel room to garage to limo to stage, and I never dealt with it,” she said. “Then all of a sudden I started to experience this incredible intense pain throughout my entire body that mimicked the illness I felt after I was raped.”

If there’s one thing that has helped Gaga come out of the trauma on the other side, it’s music. “I went through some horrific things that I’m able to laugh [at] now, because I’ve gone through a lot of mental and physical therapy and emotional therapy to heal over the years,” the pop music icon told Howard Stern in their 2014 interview. “My music’s been wonderful for me. But, you know, I was a shell of my former self at one point. I was not myself.”

Nowadays, Gaga seems to be stronger than ever. She’s currently in a happy relationship with entrepreneur Michael Polansky, who she’s reportedly been dating since late 2019. The singer has also received a total of 12 Grammys throughout her career and has proven that she’s more than just your typical pop star with her Oscar-winning track “Shallow” from A Star Is Born. She’s won two Golden Globes and has broken various Guinness World Records. Despite her long history of pain and trauma, Gaga continues to be one of the most beloved stars in the industry. And given her honesty and vulnerability, it’s not hard to understand why.