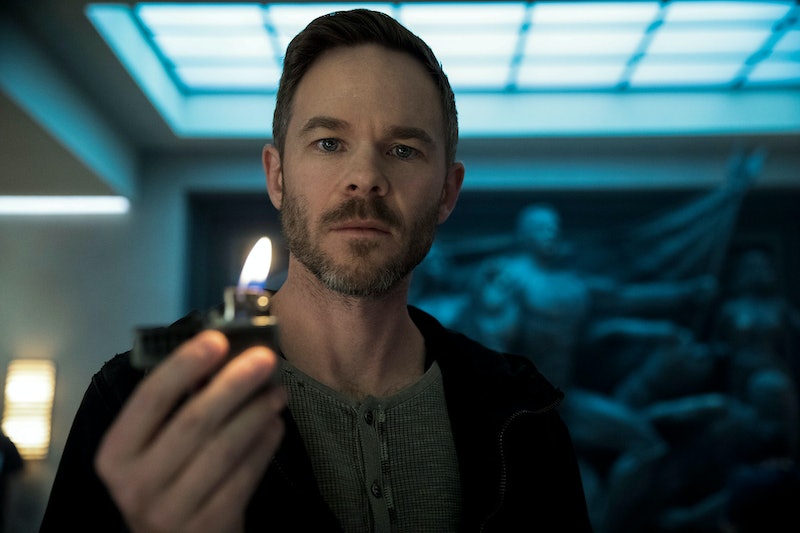 With Season 1 of Amazon's The Boys killing off a few characters, it stands to reason that some new characters will be making their way into the series in Season 2. One of them is someone whose name fans heard mentioned a few times in Season 1 but whom was never actually seen: The Lamplighter. In The Boys comics, The Lamplighter is a founding member of The Seven who is just as dastardly as the rest of them, and there's already evidence that he'll be just as bad in the series.

Prior to the events of Season 1 of The Boys, The Lamplighter retired from The Seven. Why he did so is not revealed, but current members of the super-team remark on his retirement, which made room for Starlight to join the team. He is also mentioned by the founder of The Boys, Grace Mallory, who revealed in the Season 1 finale that The Lamplighter murdered her grandchildren by burning them alive. So... yeah. He definitely sounds like one of The Seven. The event caused Mallory to leave The Boys and retire from vigilantism, but if you look at the comic book backstory, it sounds like there could be more of a history between The Lamplighter and Mallory than the show has revealed up to this point.

In the comics, The Lamplighter has the power of pyrokinesis, meaning he's able to control fire. He can't create it out of thin air, but if there's fire around, he can bend it to his will. Like in the show, the comic book version of The Lamplighter used this power to burn Mallory's grandchildren alive. But this is where the two narratives diverge. In the comics, The Seven actually expelled The Lamplighter for this act and turned him over to Mallory in order to prevent an escalation of hostilities with the CIA. Mallory then killed him, which was the actual impetus for her getting out of the vigilante business. Following Lamplighter's death, he was revived by Vought. But rather than striking out for revenge against his killer, the zombie Lamplighter had severe brain damage and was capable of doing little more than sitting in a room at The Seven's headquarters.

In the series, The Lamplighter will be played by Shawn Ashmore. This is an especially clever bit of casting since, if you recall, Ashmore portrayed Iceman — a character whose powers are the exact opposite of The Lamplighter — in the X-Men series of films. Not only that, but Iceman's nemesis in those movies was Pyro, a supervillain with identical pyrokinetic powers to The Lamplighter. It's a small comic book world, isn't it?

The Lamplighter's comic book story could end up informing the TV series in some interesting ways. Ashmore described the character on Twitter as "a man with secrets to tell." He's also the reason why The Boys disbanded years earlier. We don't yet know why The Lamplighter retired in the series, but could it be that he didn't retire at all? Maybe, like in the comics, he was killed by Mallory after being given up by The Seven. Him returning in Season 2 would imply that Vought has successfully brought him back from the dead (sans brain damage), and his re-emergence could cause some major problems for both The Seven and The Boys with all he knows about their collective past.

This is just a theory based on The Lamplighter's comic book background, but whatever the reason for his return in the series, he's definitely going to cause problems.

More like this
Netflix Shut Down 'Bridgerton' S3 Rumours About A “Very Dark” Storyline
By Bustle
Everything To Know About The 'Daisy Jones & The Six' TV Series
By Maxine Harrison and Brad Witter
Everything To Know About 'Only Murders In The Building' Season 3
By Gretchen Smail and Kadin Burnett
Bill & Frank’s 'The Last Of Us' Episode Has Twitter Emotionally Wrecked
By Alyssa Lapid
Get Even More From Bustle — Sign Up For The Newsletter
From hair trends to relationship advice, our daily newsletter has everything you need to sound like a person who’s on TikTok, even if you aren’t.