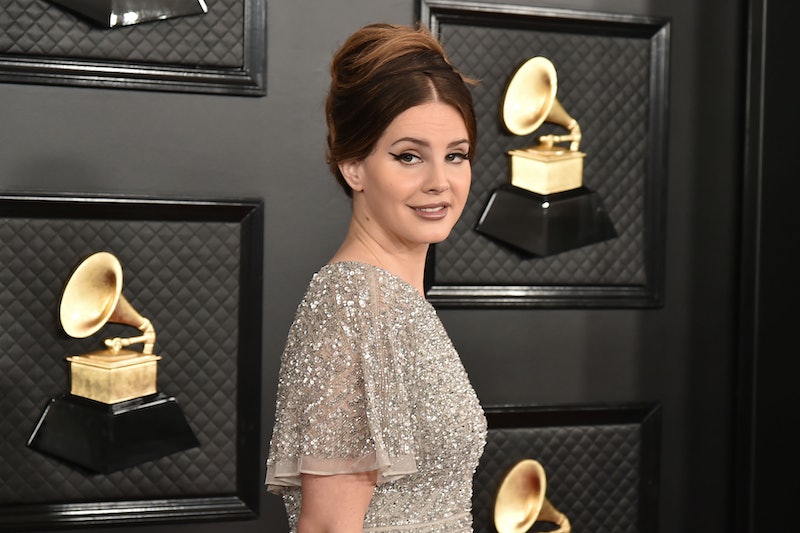 Lana Del Rey announced her long-awaited forthcoming album Chemtrails Over The Country Club last night on Instagram, unveiling its cover art and 11-song tracklist to her nearly 18 million followers. The album will feature her latest single, "Let Me Love You Like A Woman," as well as new tracks, including "Tulsa Jesus Freak" and "Dance Till We Die." The cover is a sweet image of Del Rey and ten other smiling friends seated around a table. Before her fans had the chance to react to the announcement, however, the singer issued a lengthy comment underneath and preemptively defended herself against any potential criticism to come over the diversity of the women featured in the album cover.

"There’s always turmoil and upheaval and in the midst of it — there’s always beautiful music too. Introducing my new album Chemtrails Over The Country Club," the singer captioned the album announcement before continuing her thoughts in the comment section.

"I also want to say that with everything going on this year! And no this was not intended — these are my best friends, since you are asking today," she wrote. "And damn! As it happens when it comes to my amazing friends and this cover yes there are people of color on this record's picture, and that’s all I’ll say about that, but thank you."

Further insisting that the Chemtrails table isn't made up of just white women, Del Rey went on to name every person of color featured in the album's artwork: "My beautiful friend Valerie from Del Rio Mexico, my dearest friend Alex, and my gorgeous friend Dakota Rain, as well as my sweetheart Tatiana." Noting that the women are her true friends, she described the group as "a beautiful mix of everything."

Continuing the comment, which she posted in response to no apparent backlash, the "Norman F*cking Rockwell" singer defended her previous work, asserting that it's always been diverse. "In 11 years working I have always been extremely inclusive without even trying to. My best friends are rappers, my boyfriends have been rappers," she says, inching toward problematic "some of my best friends are black" rhetoric.

"My dearest friends have been from all over the place, so before you make comments again about a WOC/POC issue, I’m not the one storming the capital," Del Rey wrote, seemingly forgetting that she can still be ignorant even if she stayed home on Jan. 6. Concluding her thoughts, she added, "I’m literally changing the world by putting my life and thoughts and love out there on the table 24 seven. Respect it."

This isn't the first time Lana Del Rey has launched an unprompted conversation about race. Back in May, she garnered major backlash for her "Question for the culture" Instagram post in which she defended herself against critics who claim her music "glamorizes" abuse. She proceeded to call out singers, including Kehlani, Beyoncé, Doja Cat, and Nicki Minaj, for achieving success with tracks "about being sexy, wearing no clothes, f*cking, cheating, etc." while her songs receive harsh criticism for their racy content. Toward the end, she wrote that "there needs to be a place in feminism for women who look and act like me."

Del Rey's comments were largely considered tone-deaf, especially considering she mainly criticized women of color, and her responses didn't help her argument. She clarified that she named singers she's a fan of, claimed the issue had nothing to do with race, and pointed fingers at “flip-flopping headline grabbing critics [who] can’t read and want to make it a race war.” The singer concluded her tangent with a video message in which she discussed "the need for fragility in the feminist movement" and said, “I’m not the enemy, and I’m definitely not racist, so don’t get it twisted. Nobody gets to tell your story except for you, and that’s what I’m gonna do in [my] next couple of books. So god bless, and, yeah, f*ck off if you don’t like the post.”

Lana will release Chemtrails Over The Country Club on March 19, 2021 through Interscope Records. Check out the full tracklist below:

More like this
Everything To Know About Taylor Swift’s 10th Studio Album, 'Midnights'
By Grace Wehniainen and Jake Viswanath
Mariah Carey Is Releasing Her “Lost” '90s Grunge Album
By El Hunt
Everything You Need To Know About ‘Black Panther: Wakanda Forever’
By Bustle Editors
How Ghosts Inspired Kesha’s New Music
By Jake Viswanath
Get Even More From Bustle — Sign Up For The Newsletter