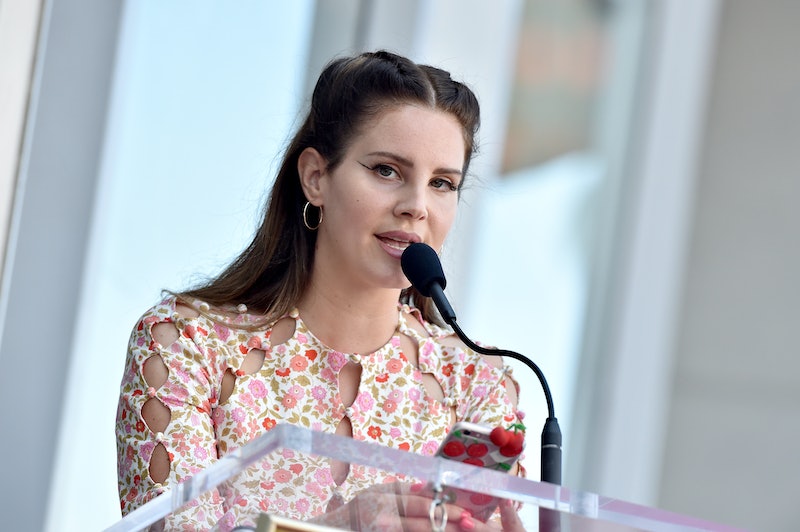 Lana Del Rey is simply too busy living life to spend time on social media. On Saturday, Sept. 11, the pop star announced that she would be deactivating Twitter, Facebook, and Instagram to focus on more important things. “I just wanted to let you know that tomorrow we are going to be deactivating my social media accounts, and that is simply because I have so many other interests and other jobs I’m doing that require privacy and transparency,” she wrote in an Instagram post, per Insider. The singer didn’t reveal when, if at all, she would return, but she did promise fans that more music is coming.

“I’m still very present and love what I do,” Del Rey reportedly wrote. “I’m absolutely here for the music. I’m also just going on some different endeavors and I want to say thank you so much for all the support and I do hope that you like the record.” Her upcoming album, Blue Banisters, is due out on Oct. 22. “It’s a compilation of older songs and some new songs; some written by family and friends and mostly old collaborators,” Del Rey continued before promising an endless supply of new music. “And there will always be more to come.”

The “Let Me Love You Like A Woman” singer closed out her statement by thanking the fans for their limitless support. “I wanna say a heartfelt thank you for continuing to kind of see me through the music,” Del Rey wrote before explaining why it’s so important for her to scale back on social media. “It’s always important to be witnessed, and it’s also really important just to be witnessed by the people close to you that you know and who you trust, and for right now, I think I’m going to just keep my circle a little bit closer and continue to develop some other skills and interests.”

Del Rey isn’t the only musician who’s decided to stay away from social media apps altogether. During a recent interview on The Late Late Show With James Corden, Lorde said that cleansing herself of Twitter, Instagram, and Facebook several years ago was one of the most challenging things she’s ever done. “I did it because I thought my brain wasn’t working very well anymore,” the Solar Power artist said. “It was horribly difficult, hardest thing I’ve ever done, and still horribly difficult every day.”

Like Del Rey, Lorde stepped away from social media because it was a distraction from more important things — namely, her songwriting. However, if she didn’t have to focus on music, she admitted that she would probably still be on the apps. “It’s very, very difficult and I truly only do it because I am trying to write songs and I was wasting a ton of time,” Lorde admitted, adding that it wasn’t the hate and negativity keeping her from social media, but the feeling that it was becoming increasingly difficult to formulate her own opinions.

Since giving up social media, Lorde has been itching to connect with her fans in person. “I just want to be as connected as possible,” she told Corden before explaining that she’ll be performing at “cozy” and “intimate” venues on The Solar Power Tour in spring 2022. “I feel like people want to have a really big transcendent experience at my shows.” Now that Del Rey has deactivated her accounts as well, it’s likely that she’ll be craving that same connection. At this point, no tour dates have been announced, but according to her website, fans should check back for upcoming dates soon.

More like this
Twitter Is In Awe Of Taylor Swift’s “Lavender Haze” Music Video
By Jake Viswanath
Cruz Beckham Teased New Music With An Adorable Nod To Mom Victoria Beckham
By Stephanie Topacio Long
Zach Gilford Admits He Forgot Taylor Swift's Name When He Starred In Her Music Video
By Jake Viswanath
Cardi B, Olivia Rodrigo & More Will Present At The 2023 Grammys
By Jake Viswanath
Get Even More From Bustle — Sign Up For The Newsletter
From hair trends to relationship advice, our daily newsletter has everything you need to sound like a person who’s on TikTok, even if you aren’t.