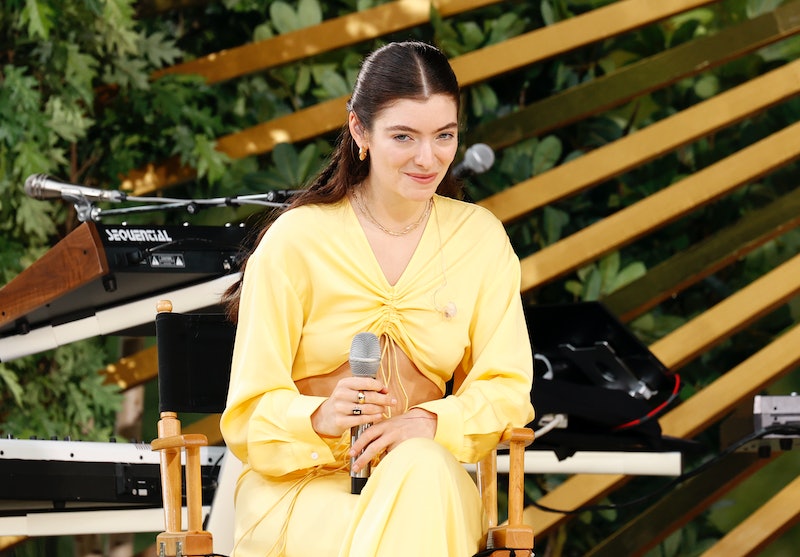 Lorde made it look easy, but quitting social media was one of the “hardest things” she’s ever done. On Tuesday, Aug. 24, the Solar Power artist appeared on The Late Late Show with James Corden to promote her new album. And after discussing everything from release week to how she got her big break, the singer revealed why she decided to cleanse herself of platforms like Facebook, Twitter, and Instagram.

“I did it because I thought my brain wasn’t working very well anymore,” Lorde said. “It was horribly difficult, hardest thing I’ve ever done, and still horribly difficult every day.” The singer compared it to giving up sugar. “I still eat tons of sugar and if I don’t have sugar I feel insane,” she added. “And the first little while of not being on social media was totally like that. I was so crabby, I felt so disconnected, but it’s how my life is now.”

After explaining that her assistant holds on to all of her passwords, the “Green Light” singer said that she took her social media cleanse one step further by removing the internet from her phone as well. “I got rid of a search engine function on my phone, so I can’t Google anything on my phone,” she revealed. “I can’t. Like, I have no Safari or anything like that, but it’s great. You actually don’t need to Google as many things as you think you need to.”

Chrissy Teigen, Lizzo, and Miley Cyrus are just a few of the celebrities who have quit social media in the past after reading negative things about themselves on the internet. But Lorde said that she quit for an entirely different reason. “I never really read anything about myself,” she said. “It’s just sort of the experience of reading about the world all of the time. I sort of felt like I didn’t have time to decide how I felt about anything.”

Lorde’s desire to be able to think for herself and formulate her own opinions is ultimately what prompted her to leave the apps behind, but she wants people to know that it’s not easy and that she probably wouldn’t do it if social media didn’t interfere with her work. “It’s very, very difficult and I truly only do it because I am trying to write songs and I was wasting a ton of time,” she admitted.

Although she’s unable to connect with fans on Twitter and Instagram, the pop star is looking forward to connecting with everyone in person when she goes on tour next year. “I just want to be as connected as possible,” she said before explaining that she’ll be performing at “cozy” and “intimate” venues. But even though she’ll be playing theaters, Lorde knows that fans have high expectations. “I feel like people want to have a really big transcendent experience at my shows,” she said. The Solar Power Tour is scheduled to begin in New Zealand on February 26, 2022, and will wrap up in London on June 28.