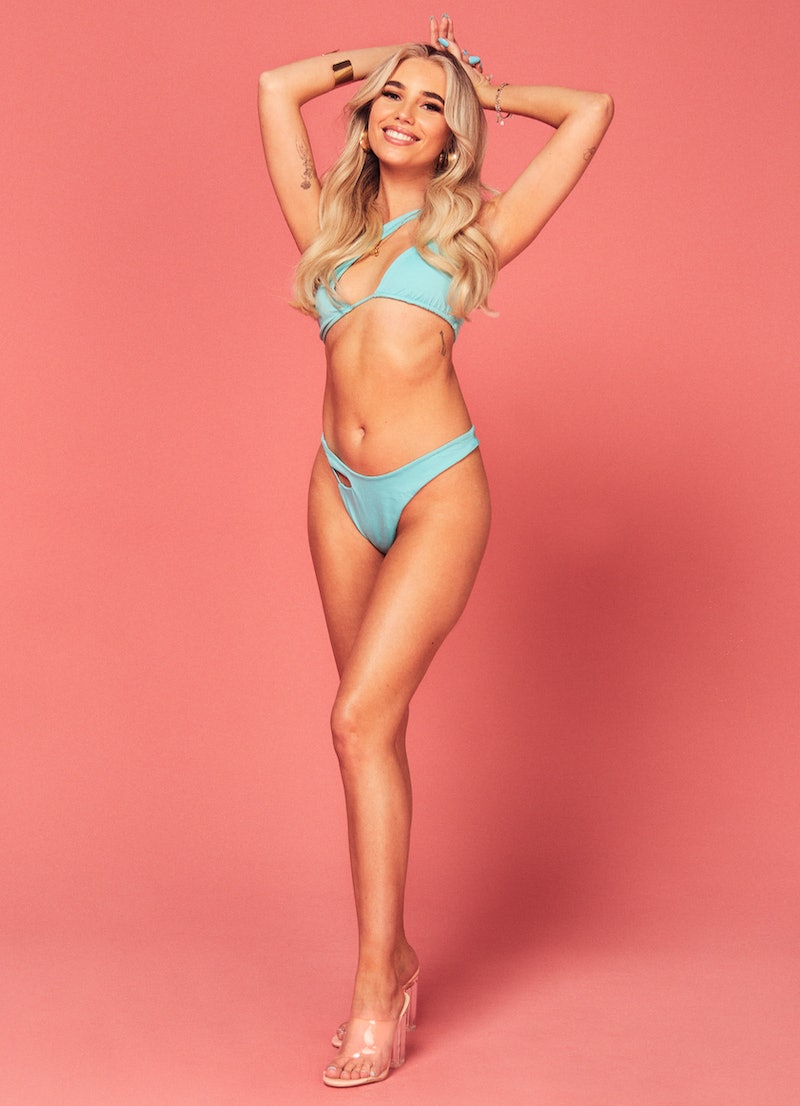 With the arrival of ITV2’s much-anticipated Winter Love Island, fans got a first glimpse of the islanders on Jan. 9. Among this year’s sizzling line-up is Luton-based Lana Jenkins, who is set to enter the South African villa in a bid to find The One. Although Lana tends to “fall in love quickly,” some of her biggest turn-offs include “texting me all the time” and seeing a guy “trip over.” And she’s already been linked to quite a few celebs, including an I’m A Celeb 022 fave. Find out everything else you need to know about Winter Love Island’s Lana Jenkins, below.

As previously stated, Lana is 25 years old. As for her job, Lana is a make-up artist, often working at celeb-filled events. But she also has a second claim to fame: acting. “When I was 6-years-old I used to live in Spain and I was in an episode of Benidorm as an extra,” she told ITV.

Still, she never considered going on the reality dating show, but was approached by producers to apply, she told Bustle. But first, she had to get her mum’s approval. “When I told my mum she was like ‘it’s an amazing opportunity…let’s sit and have a chat about it’ and we discovered the pros are endless, so I’m thankful,” she said “My mum and I are best friends, I talk to her every day. One of the things that’s big for me is not being able to talk to her. I wish she could be in the beach hut so I could go in and get a cuddle whenever I needed.”

With her expertise in makeup, Lana is very excited about spending hours getting dressed up with the other girls in the villa. “I’ve packed every outfit that I ever owned and I know there’s going to be clothes swaps. I’ve also kept all my little makeup gems and everything,” she says, adding that she wants to get creative with her looks.

At the time Lana was revealed to be entering the Love Island villa she had 4.9k followers on Instagram. Over on @lanajenkinss you’ll find her sharing selfies and backstage snaps from some of her favourite days at work — including a cheeky stage-side video from BBC Radio 1’s Big Weekend back in 2019.

Speaking to Bustle, the makeup artist said she supports ITV’s decision to pause contestants’ social media accounts while they’re in the villa. “It’s nice that you have time away from Instagram and also your friends and family don’t have the pressure of it,” she explains. “I think it’s a lot to deal with having to watch your friend or daughter go on TV and also run an account, so I would prefer they just relax and watch the show.”

What Else Is There To Know About Lana?

Back in 2020, Lana was linked to I’m A Celebrity… Get Me Out Of Here!’s Owen Warner, with the new islander confirming their romance in a now-deleted Instagram post. Despite her celebrity ex-flames and famous clients, the Islander didn’t ask them for advice or tips, taking advice from her family and really close friends instead. “Their advice was enough,” she explained. “I didn’t need anyone else.”

Speaking about previous Love Island stars she could see herself getting along with, Lana said she could see herself being “best mates” with Olivia Bowen, Olivia Atwood, Indiyah Polak, Tasha Ghouri, Millie Court, and Chloe Burrows. Talking about the boys, Lana was quick to point out that “Ovie Soko was top tier,” adding Jack Fowler and Jordan Haynes to her list of previous Islanders who would have made her list. “I don’t think I have a type but swag is a bit of a thing for me and they all had that,” she explained.

Ahead of entering the villa, Lana shared her worst date with ITV, explaining that her date was “drop dead gorgeous” but didn’t make any effort on the actual date. “When I arrived he literally took me to a bar next door to his flat and hadn’t made much effort. All he did was talk about himself and his work. I just sat there and then he took a phone call for 20 minutes and didn’t even apologise! I then said, ‘Oh I’m going to have to go’ and then he went, ‘see ya later’.”

After disappointing experiences like this in the outside world, Lana’s looking for love in the villa. “I fall in love quickly,” she said. “I tend to know quite soon if I could fall in love with that person and then, as long as everything is going well, I’ll probably tell them I love them in about a week.” The makeup artist isn’t afraid to step on toes. I “I'm just going to go in as me but I also think this is Love Island you’re meant to go in and find the one, it doesn’t work the way it does outside…So I need to explore all the options and the same for the other girls and I think some healthy competition is good,” she explains.

Lana relies on meditation and early morning yoga to find her calm and describes herself as a “glass half-full kind of person.” She also added that there’s one sure-fire way to give her the ick. “I don’t mind people texting me all the time but if you send me question marks if I’ve not replied to you in a while, you’re gone. That's a really big red flag for me. Also if I see a guy trip over, that's an instant turn off.”

More like this
'Love Island' Has Added Yet Another Bombshell To The Villa
By Bustle UK
This Pre-'Love Island' Video Of Olivia & Zara Together Changes Everything
By Bustle UK
Molly-Mae & Tommy Fury Revealed Their Baby Girl's "Really Unusual" Name
By Sophie McEvoy and Sam Ramsden
Twitter Is Saying The Same Thing About 'Love Island'
By Sophie McEvoy
Get The Very Best Of Bustle/UK
Sign up for Bustle UK's twice-weekly newsletter, featuring the latest must-watch TV, moving personal stories, and expert advice on the hottest viral buys.