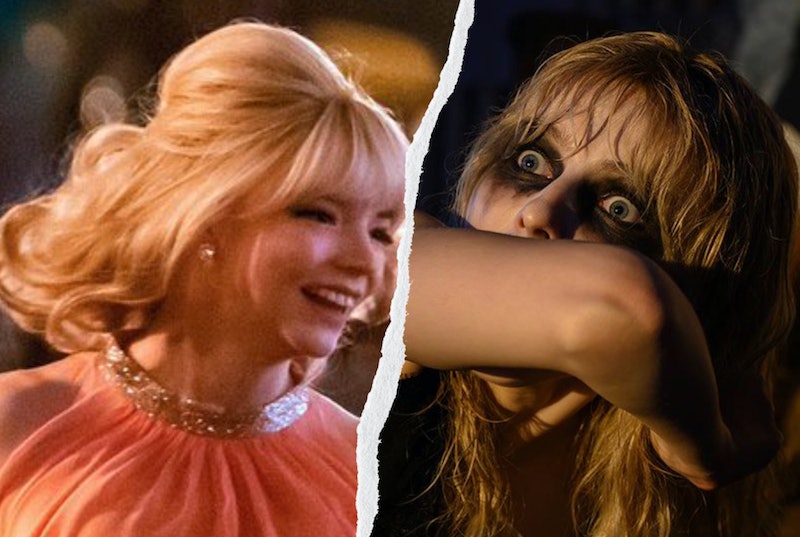 Ever wanted to step into the glitz, glamour, and gore of 1960s London? Then look no further than Last Night in Soho, Edgar Wright’s upcoming psychological thriller set to be released just in time for Halloween movies season. The film tells the tale of two women from different time periods whose lives mysteriously become intertwined and lead to dangerous consequences.

Though Last Night in Soho was originally shot in 2019 and scheduled to come out in September 2020, its release was inevitably delayed due to the coronavirus pandemic. As a result, it was initially pushed back to April 2021, before being postponed again to Oct. 22. “I know some of you may be disappointed [about the delay],” Wright, who wrote and directed the film, tweeted when announcing the film’s second postponement. “But my hope is more of you will be able to experience it as we intended; in the dark, on a big screen, with an audience.”

If watching Last Night in Soho in theaters makes the film even spookier than it already sounds, count us in. Here’s everything we know about Last Night in Soho, from its mysterious plot to its cast, including Golden Globe-winning Queen’s Gambit star Anya Taylor-Joy.

For those interested in who’s crooning the haunting rendition of Petula Clark’s 1965 hit “Downtown” in the film’s trailer, Wright confirmed that it is none other than Taylor-Joy.

What Is The Plot of Last Night in Soho?

The psychological thriller is set in London’s Soho district at two very different points in time: present day and the 1960s. The story centers around Eloise (Thomasin McKenzie), a young fashion designer who magically gains the ability to travel back in time to the 1960s. It’s there she meets her idol Sandy (Anya Taylor-Joy), a glamorous singer with big dreams, and the two seem to share the same body as they move throughout time together. But as time begins to crumble, tensions grow, and their identities begin to merge, Eloise quickly discovers that all that glitters in London is not gold.

According to Wright, the plot of Last Night in Soho has been on his mind for years and came from the idea of imagining “what these walls had seen” on his late night walks through London. “It’s an idea I’ve had for a long time. I didn’t start writing it until 2018, but I’ve had the plot worked out for years,” he told Esquire in 2019. “It’s set in central London, which is also something I’d never actually done, even though Shaun of the Dead and bits of Hot Fuzz and bits of The World’s End are in London.”

Who Is Involved In Last Night In Soho?

Thomasin McKenzie, known for her roles in Jojo Rabbit and Leave No Trace, will star as young fashion designer Eloise, while Anya Taylor-Joy will step into the role of glamorous ‘60s crooner Sandy. The duo are joined by a star-studded cast which includes Jessie Mei Li of Shadow and Bone series fame as Lara, Matt Smith as Jack, Michael Ajao, and Synnøve Karlsen as Jocasta.

The cast also includes a collection of prominent actors who began their careers in the ‘60s, including Terence Stamp and Rita Tushingham. It will also feature the final performances of Margaret Nolan and Diana Rigg, who both passed away in 2020.

It’s worth noting that the names of both McKenzie and Taylor-Joy’s characters are written differently on online depending on the website. On IMDB, they’re both listed as ‘Eloise’ and ‘Sandy,’ but on the film’s official website their names are shared as both ‘Sandi,’ ‘Sandie,’ and ‘Ellie.’ Anya Taylor-Joy has also written her character’s name as ‘Sandie’ in the past. Whether this adds anything to the plotline of the film or is just a series of spelling errors remains to be seen.

When Will Last Night In Soho Be Released?

This post will be updated with additional plot and cast details as more information on Last Night in Soho becomes available.