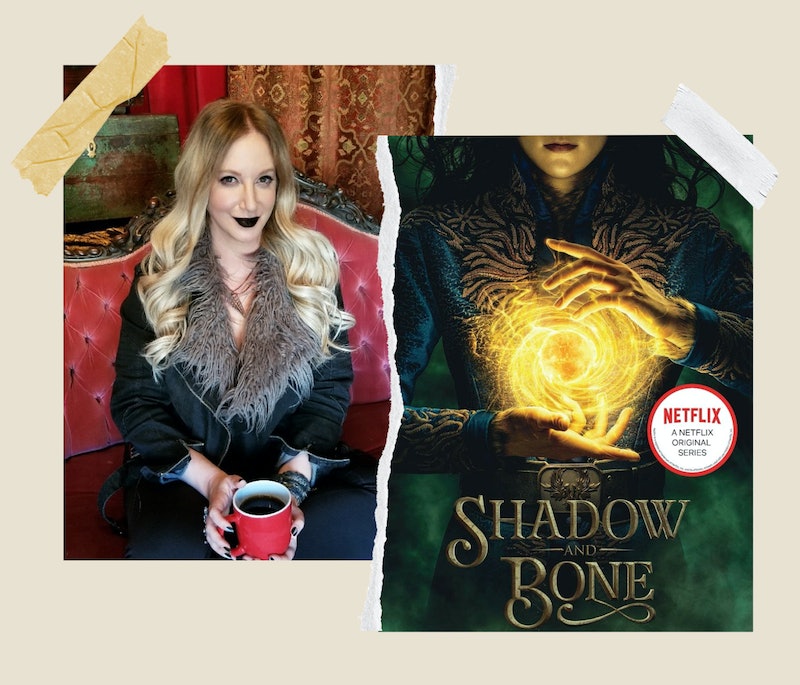 Leigh Bardugo is not precious with her writing. While other authors dig in their heels, proclaiming the sanctity of their work as if it were delivered from on high, Bardugo welcomes meddling.

When Netflix came calling, the novelist behind the Shadow and Bone trilogy and Six of Crows duology — and a smattering of other tomes that take place in her czarist fantasy world known as the Grishaverse — saw an opportunity to do just that. Working with Eric Heisserer (Arrival, Bird Box) and his team of writers, Bardugo reimagined a few key elements of her series, most notably plucking a cadre of characters out of Six of Crows and weaving them into Shadow and Bone. She also used the show as a chance to remedy her early novels’ lack of diversity. “I wanted to make sure the show did better than I did,” she tells Bustle.

Perhaps even more exciting than a chance to right your past wrongs? Seeing your imaginary world made real. Bardugo was sure to send the production team her years-in-the-making collection of Pinterest boards filled with Russian folklore — though she notes she “didn't want them to feel bound by those things” — and was more than impressed with the results. “As a jet-lagged person, it definitely felt hallucinatory,” she says of the first time she stepped on to the Shadow and Bone set in Budapest, Hungary. “And then to see a sand skiff that had been built to scale stand on its deck, to see Kirigan's coach, to see an entire first army camp and all of these extras in their uniforms and dressed as peasants and to walk the streets of Ketterdam.” Judging by the tone of her voice, the awe still hasn’t faded — and if Shadow and Bone is renewed for a second season, it won’t be the last time she’ll marvel at seeing the Grishaverse built to scale.

Below, Bardugo discusses her Russian heritage’s influence on the Grishaverse, treating her published work as a draft to be improved upon, and where Shadow and Bone might go from here.

The journey to bring Shadow and Bone to screen involved changes to the source material. What was it like tinkering with the work you've already done and merging different stories?

I mean the big ideas — the idea of bringing Shadow and Bone and Six of Crows together — [showrunner Eric Heisserer] introduced very early and I was on board pretty much right away, because I thought it made the world feel bigger and more authentic. And I think it provided a kind of different access point... it's not just a chosen one story full of people with great magic and royal blood. It's also a story about people who are considered expendable — who are scrappers from the streets and who don't have access to those kinds of power — still trying to survive in this world where these big, epic things are happening.

So Eric and I talked through that, what that was going to look like early on. And then once we'd assembled the writers room, I would go in and they would pitch me their episodes every week or every other week. And we talked through them, we'd argue about things. We would brainstorm things. Sometimes I would just sit back and gasp or smile or applaud because they’d come up with something spectacular.

I know that one big thing you wanted to change for the TV series was making the story more diverse.

When I wrote Shadow and Bone, it was my first novel and, really without thinking about it, I was echoing a lot of the fantasy stories I'd grown up on, which were predominantly straight and white — which may speak to my reading material. But I think it also speaks to what a lot of stories were for a very long time. And it was really only as I became more competent as a writer that I started to really reflect the world around me more authentically and thoroughly, and that meant writing more inclusively. So I think you can see that change as the novels progressed, but that was something I wanted to make sure the show did better than I did.

In that vein, why change Alina specifically and make her half Shu? Did you just think it made sense narratively?

Well, Alina comes from a border town in the books. She is raised on the border between — or she's born at — the border between Shu Han and Ravka before she goes to the orphanage at Keramzin. And to me, that made perfect sense for her to be half Shu. Borders are not walls, they're porous. People do business across them and they fall in love across them. They form partnerships across them. And so that seemed like a very natural, organic change to make.

And Alina is also an outsider, and we really wanted to explore what it meant to be somebody who could not hide their outsider status, and who had been treated fairly shabbily by a country that she was then going to be asked to save. I think it made for a richer and more poignant story. And I think that that was something that the writers room, many of whom are mixed race, brought a tremendous depth to.

When you were first building this world, what were your real-life influences?

I did quite a bit of research in czarist Russia out of the early 1800s and the mid 1800s. Some of that was cultural history, military history. Some of it was going to used bookstores and buying old coffee table books and recipes, finding prayer hymnals, and trying to get a sense for the textiles, the religions, the look, feel, smell and sound of this past world. It was a jumping off point, the way that medieval Europe has been the jumping off point for so many stories set in alternate worlds.

What was it that drew you to that particular jumping off point?

Well, I am the great-grandchild of Russian immigrants who fled Russia and Lithuania. And I grew up hearing stories of Russia as this place of tremendous beauty of tremendous culture of tremendous grandeur, but also as a place of tremendous danger and brutality. So I think that that was something that was embedded in my imagination very early on, and that there was both fear and and intrigue and delight associated with that world. For me, it was almost a sense of a place that was extraordinary, but that you could never return to. And when I started working on this story, I recognized some of the themes that have colored Russian history working their way into Alina's story: the idea of this large army of young conscripted soldiers, the failure to industrialize, this huge division between the rich and poor.

What's it like to continue creating with within a world that already has such a strong fan base?

Sometimes it's intense. You know, people bring a lot of expectations to the page that didn't exist when I first started working on these stories. But at the same time, I know I wouldn't have gotten to write seven novels in the Grishaverse if it weren't for people investing in these characters and this world. So I think Rule of Wolves [the most recent Grishaverse book]... kind of exists as a farewell for now. It was a chance to offer the readers a kind of grand finale and leave the door open for future stories, but also to give my self a chance to step back maybe for a few months, maybe for a few years and work on other stories in other worlds.

Do you have any sense of what's next?

Well, I am writing the sequel to Ninth House. I am behind on it, but I will get there, which is a fantasy series that is not for young readers, it's for adults. And after that, I have a few projects that I hope to be able to write and work on. And I will admit there are Grishaverse stories I really want to tell. There's a very big door open at the end of Rule of Wolves, but there are a lot of other characters who I found very fascinating, who stepped onto the page in this book and that I would love to see get more developed stories of their own.

Back to Shadow and Bone: When you mapped out how this slightly altered version of your story would work as a series, did you plan out how it would end?

We have a grand plan. We have roughed out what we would like to see, but we just don't know if we'll get to go there. So if people enjoy the show, please take to the internet!

More like this
Netflix Shut Down 'Bridgerton' S3 Rumours About A “Very Dark” Storyline
By Bustle
The 'Freeridge' Cast Shared Their Hopes For A Potential Season 2
By Grace Wehniainen
You Might Want To Rewatch This Key 'On My Block' Scene To Understand 'Freeridge'
By Grace Wehniainen
Ashton Kutcher Wants Danny Masterson “To Be Found Innocent” In Rape Retrial
By Jake Viswanath
Get Even More From Bustle — Sign Up For The Newsletter
From hair trends to relationship advice, our daily newsletter has everything you need to sound like a person who’s on TikTok, even if you aren’t.