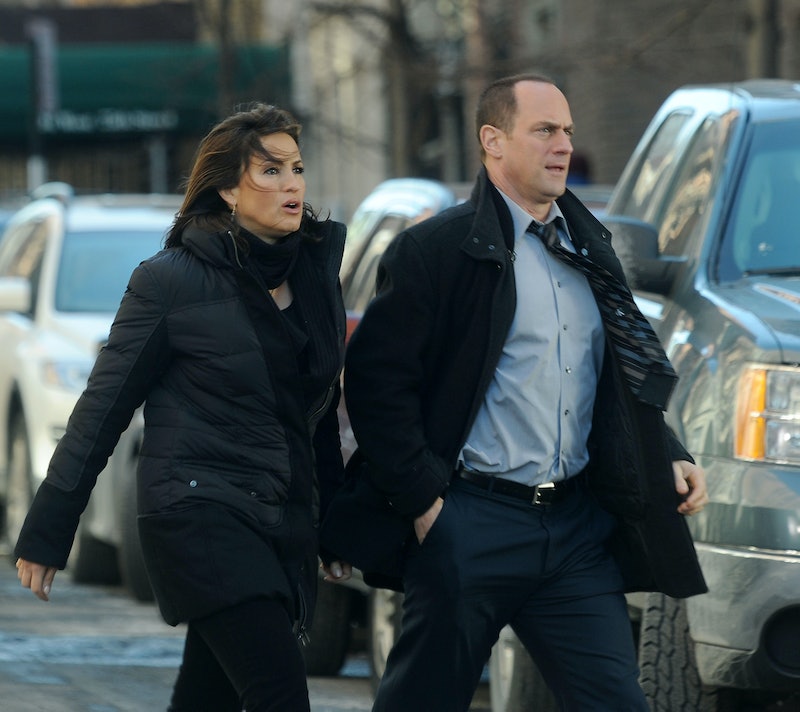 It's been a year since Christopher Meloni's Law & Order spinoff was announced, and fans have been eagerly awaiting Elliot Stabler's return to the NYPD and TV screens across the country. After a long wait, the much-anticipated Law & Order: Organized Crime series aired on April 1 following a special SVU crossover episode on NBC. Here is everything you need to know about the new Law & Order spinoff, including the plot, teaser, what Stabler's been up to, and details about his reunion with Mariska Hargitay, aka Olivia Benson (and whether she’ll appear in any new episodes later on).

According to NBC, the new spinoff will see Stabler return to the force "to battle organized crime after a devastating personal loss,” since revealed to have been his poor wife Kathy. "However, the city and police department have changed dramatically in the decade he's been away, and he must adapt to a criminal justice system in the midst of its own moment of reckoning." The summary continued, "Stabler will aim to find absolution and rebuild his life while leading a new elite task force that is taking apart the city's most powerful criminal syndicates one by one."

As Law & Order fans are sure to remember (perhaps painfully), Meloni departed SVU between Seasons 12 and 13 due to a dispute over his contract. For what it's worth, he didn't like how it all went down, either, telling People that the situation was "inelegant" despite how much he enjoyed pursuing new opportunities after.

For their entire tenure together, Meloni and Hargitay were beloved for their characters' chemistry as partners — so naturally, fans have been eager to see them reunite on screen. Hargitay, of course, is still busy leading the very-much-ongoing SVU, so viewers won't see them star together on an ongoing basis. "I hear she has her own day job," Meloni joked with The Talk in July.

However, the pair did appear together via a crossover event during the April 1 SVU episode at 9.m. ET, just before Organized Crime premiered at 10 p.m. ET. Beyond these first few episodes, seeing Benson and Stabler together during other special events isn't totally out of the question. As Meloni told The Talk, he is game for "whatever we can slice away, whatever the writers come up with. I think we will both be looking forward to playing with each other in each other's sandbox."

Law & Order creator Dick Wolf recently told reporters at a press conference, according to People, that “we're going to do [crossovers] whenever it gives both shows a different way to shine.” Organized Crime showrunner Ilene Chaiken echoed the idea, saying that “these two shows exist in the same universe, a fictional, very grounded universe. And we never forget that those other characters and those other stories exist.” So it sounds like there are plans in the works to have Hargitay’s guest appearances continue when the story permits.

No matter what, fans can rest assured knowing that Meloni and Hargitay have remained friends despite their distance on-screen. "She and I stayed connected," Meloni told People, explaining that he enjoyed observing his costar's "growth" and the process of "finding her own way" after he left the show.

Now that viewers know who won't be a leading member of the cast, they may be excited to find out who will: Dylan McDermott, Tamara Taylor, Danielle Moné Truitt, and Ainsley Seiger are all series regulars, according to Deadline.

NBC first released a teaser trailer that perfectly reflected both Meloni's and Stabler's time away from Law & Order.

"You know how so much time has passed that you can't reach out," Stabler says in the clip, aptly titled "Stabler's Coming Home." "Days turn into months, turn into years, and... I just kept waiting for the right moment." Well, there's no need to worry anymore because Stabler is back in action. On April 2, NBC also released a more comprehensive trailer reintroducing Stabler and how he’s dealing with the death of his wife.