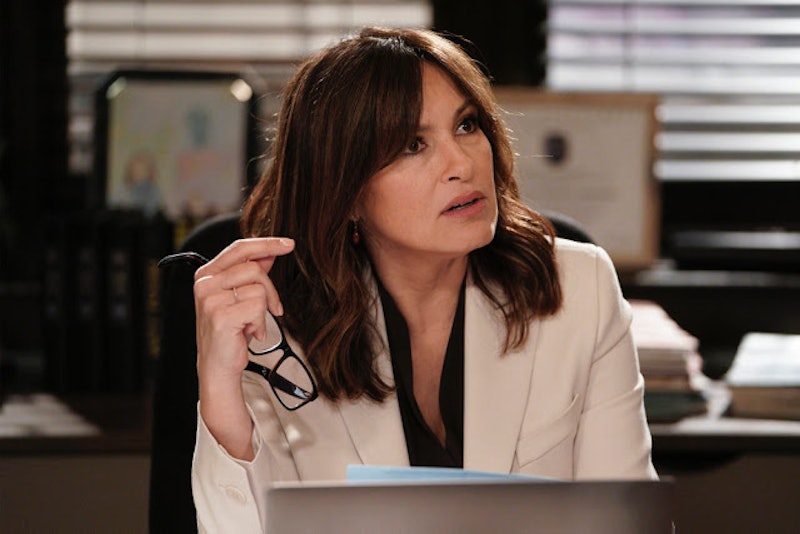 As the last remaining original cast member of Law & Order: SVU, Mariska Hargitay has long used her celebrity status to help make actual change in the world with her foundation, Joyful Heart, which supports survivors of sexual assault and abuse. And now, Hargitay is the producer of HBO's new documentary I Am Evidence, which details the backlog of the over 200,000 (!) untested rape kits sitting in police department storage facilities all over America. The actor's involvement in the film, and her devotion to justice for victims of sex crimes, has made her a true-to-life version of Olivia Benson, but 20 years ago, Hargitay never would have imagined an acting role would affect her in such an intense way.

"Frankly between you and me, I thought I was gonna be in comedy," Hargitay says when we chat over the phone in April. Early in her career, she explains, she did bit parts in sitcoms like Seinfeld, but soon, she started to notice a curious trend. "I kept getting cast as cops, even on a sitcom!" she explains, laughing. "I was like, god is trying to tell me something. And then I played undercover cops and regular cops — I played so many cops."

When Hargitay was finally cast as Detective Olivia Benson on SVU in 1999, she decided to go along with where destiny was pointing her. "I got this role and thought, wow, this is not where I thought I was going with this, but here I am," she explains. This led to her asking herself, "Well, why am I here?" Hargitay adds. "I tried to find the meaning and I realized I had this incredible gift and this opportunity that I had been given to use my platform for good in the world."

That opportunity came soon. Not long after SVU began airing, fans began writing Hargitay with their stories of rape, assault, childhood trauma, and more. Olivia Benson, these fans wrote, gave them hope, inspired them, and convinced them that Hargitay would be willing to lend a sympathetic ear — which, of course, she was.

"So many brave, courageous survivors honored me and have given me the privilege of sharing their stories with me," Hargitay says. "It was like being anointed, in a way." It was after the bags and bags full of letters kept coming that the actor knew she had to take action. "The fact of the matter is, when somebody trusts you like that, what can I do?" she recalls asking herself. "How can I turn up the volume on this issue? How can we make a change here?"

In 2004, she founded Joyful Heart. "The fact is, I didn’t really have a choice," Hargitay explains. "With the statistics that I saw and the platform that I was given and the pain that I witnessed and the injustice that I saw, it was just too much. I didn’t know what to do with it. I wanted to respond to it. It felt like a calling. It felt like not an accident. It felt like I’m supposed to do something."

In 2010, Hargitay went before the U.S. House of Representatives to speak on the issue. "I went to testify and hope and pray that my voice would matter, and I just wanted to add it to the chorus," she recalls. "The word fearless has played such a big part of my life — it’s something that I aspire to be."

It was in D.C. where she met Michigan prosecutor Kym Worthy, who also appears in I Am Evidence. Worthy was the one who originally discovered that Detroit's Wayne County had a backlog of over 11,000 rape kits that had gone untested, and Hargitay teamed up with her on the spot. While Worthy says she was somewhat familiar with SVU, she didn't know many details about the show or its star, she explains to Bustle. She also didn't know that she had a destined ally in Hargitay until their fateful meeting.

As the doc depicts, Worthy and Hargitay are working together to try to change laws so that victims can be heard, prove that survivors matter, and bring humanity and justice into the sexual assault landscape. They want to educate law enforcement to deal with the neurobiology of trauma, get more SANE nurses (sexual assault nurse examiners) into hospitals so they can meet with survivors, and stop the victim-blaming attitudes that are so pervasive in our culture.

"How do we educate people to say that sexual assault is not the guy jumping out of the bushes?" Hargitay rhetorically asks. "That’s a very small percentage. There's disrespect and a lack of humanity. How can our justice system change to say that survivors matter and how can we give people like Kim who are out there fighting the fight get the proper resources?"

Through Joyful Heart and I Am Evidence, Hargitay is helping to change the landscape of sexual assault, and she knows she wouldn't be in such a powerful position without Olivia Benson. "I’m so grateful to SVU," the actor says. "I’m so grateful to Dick Wolf for having the vision and the creativity to write this show and these characters and letting me play this character the way that I wanted to play her, with humanity and femininity and empathy and not to be a cop in a man’s world."

Hargitay may not have meant to build a career in the TV landscape of drama and crime, but the real world is lucky to have both the SVU character and the activist behind her.