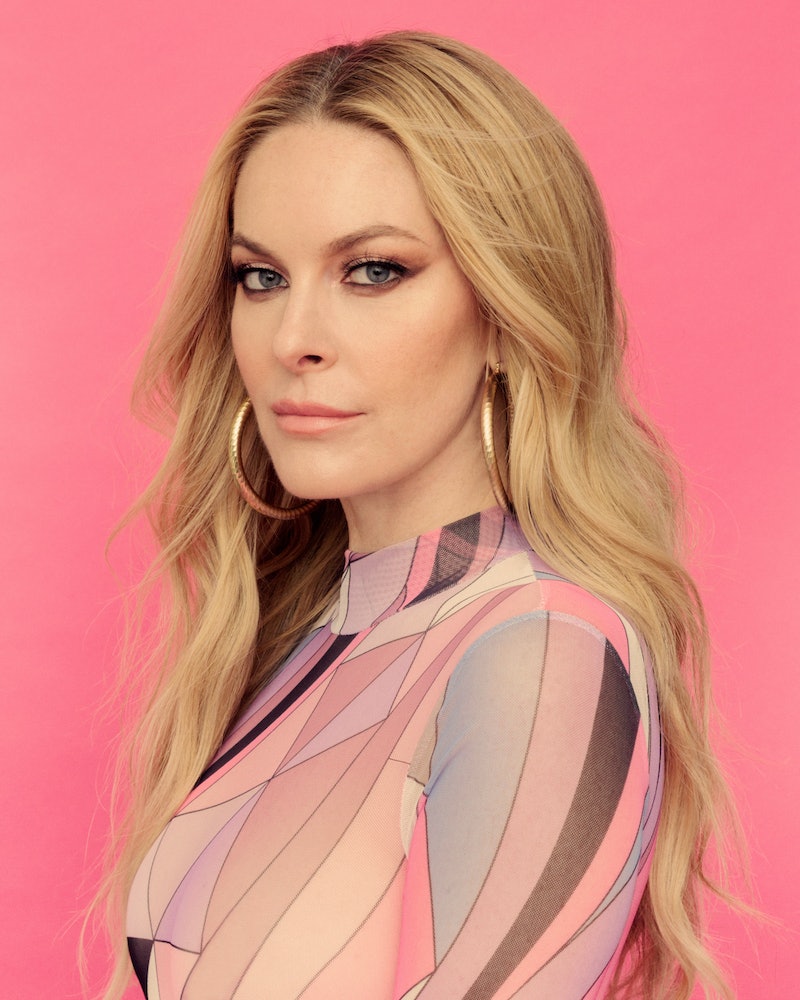 The Real Housewives of New York City’s Leah McSweeney knows that parts of her memoir read like storylines from HBO’s Euphoria. In Chaos Theory: Finding Meaning in the Madness, One Bad Decision at a Time, she revisits her drug-fueled teen years when she vacillated between the NYC club scene and rehab stints and AA meetings, procured urine from friends to skirt drug tests, and had her first sexual experience with two women after consuming acid and liquor in ninth grade. “I tried watching Euphoria when it first came out, but it was making my heart race so I had to turn it off because it’s just too similar,” the Married to the Mob founder tells Bustle. “I don’t want to watch teenagers doing drugs and having sex and being totally reckless. I did that already, and I don’t want to relive it.”

McSweeney does relive those years of “snorting, chugging, and disappearing” in Chaos Theory, albeit with the gift of hindsight, admitting she’s since learned that taming “the beast inside” requires “more than ecstasy, weed, and alcohol.” Though glimpses of her teenage recklessness could be seen when “Hurricane Leah” swirled onto RHONY in Season 12 and began drinking again after nearly a decade of sobriety, she’s more of a tropical storm these days, with the inner tumult to match.

Season 13 of RHONY showed a “Cali sober” McSweeney bearing the grief of her grandmother’s death. It was a challenging season, as she struggled to film with a smaller-than-usual cast amid a pandemic that had largely shut down the glamorous social events the series is known for showcasing. Audiences, too, seemed to be turning on her just as quickly as they had deemed her a fan favorite the season prior. In light of low ratings, Bravo didn’t even film a Season 13 reunion.

Months later, executive producer Andy Cohen announced Bravo’s plans to reboot and recast RHONY, likely from scratch, while also launching a second series featuring former stars. As of now, McSweeney doesn’t know if she’ll be invited to return for either iteration. “Obviously with this show, you don’t sign on for multiple seasons,” she explains. “You never know if you’re going back next season or not, and it could be taken away at any moment.”

It’s an ethos that’s in line with the message of Chaos Theory: that the key moments — both good and bad — that ultimately shape our paths forward are unpredictable. Below, McSweeney opens up further about her mental health and addiction journeys, her friendship with Rihanna, and what went wrong with RHONY — including which co-star she blocked on Instagram.

Chaos Theory details a lot of your struggles growing up. What was the most difficult thing to write about, and how did revisiting those dark periods affect you?

There were so many dark times, but I think the hardest was to write about when I was a teenager, because I was in so much pain and I was just looking for an escape. I really wanted a stable, good life deep down, but I was so deep into drugs that I didn’t know how to do that. It felt like I was so deep in the hole that I couldn’t really crawl out of it. How was I ever going to have a stable life when I didn’t have a place to live and I was living in a halfway house? Thinking back to that time, it was a little bit painful. I was actually kind of surprised at how much it impacted me, because I kind of thought I was over it.

Was there anything you were nervous for your 14-year-old daughter Kier to read? Did revisiting your life at her age shift your perspective as a parent?

I was nervous about her reading the part where I talk about getting pregnant and that it was unexpected, so I read it to her. I didn’t think it was going to affect her at all, like, ‘My mom didn’t want me at one point.’ She would never think that. So I guess my daughter already knows who I am. But when she was little, I was like, “I’m a flawed human being, how am I ever going to be honest about who I am with my daughter and have her still love me? I’m so f*cked up.” But you know what? You just do it. I became a parent, and I was like, I can’t hide who I am. I am very straightforward with my daughter.

You shared that Ramona Singer and Sonja Morgan reached out to Bravo with fears and concerns about your drinking after that pivotal Season 12 Newport trip on RHONY. Do you think that action was warranted, and do you view the situation any differently now, in hindsight?

I think it was hypocritical, but they didn’t know me that well. I was definitely out of control on the trip. I mean, I was blackout drunk that night. How I’m a scary blackout drunk, but Sonja isn’t, I don’t know. Whatever. I’m going to give them the benefit of the doubt that they had good intentions and were just worried about their show.

In your second season you were sober, but also grieving the loss of your grandmother, among other things. What was your reaction to the criticism you received, and how have you since found “meaning in the madness” of RHONY Season 13?

The meaning in the madness for that is that people’s actions reflect how they’re feeling. Of course you’re allowed to have opinions about things, but some people were super highly critical in a vulgar way and so nasty in general. It’s supposed to be lighthearted and fun, and I think people forget that we’re humans; we’re not characters. We’re objectified a bit by the audience. And that’s OK, I mean, this is our job, but I think the meaning in the madness there is that I needed to compartmentalize a bit. Like, hey, these are strangers, they don’t know me, I don’t know them. They think I’m grieving my grandmother in a sh*tty way, well they can f*ck off. That’s the meaning in the madness. It’s a very particular job, being on the show, and it comes with very particular pros and cons, and you have to kind of weigh it out.

In Chaos Theory, you described feeling “vindication and relief” while Season 13 was airing after seeing that amazing Rihanna Instagram post. Can you unpack that a bit?

That was the meaning in the madness right there! It’s about the quality of your fans, not the quantity. For as many people who have turned on me, I still have such amazing support and so many great fans as well. No one ever comes up to me in the street and says something nasty. People will build you up to tear you down, and I think that definitely happened with me. I think people went overboard with being obsessed with me my first season. It was just a little weird. Like, you don’t know me yet! And then I think they went overboard with wanting to turn on me. I wasn’t a different person in [my second season], I did not have an ego because I’m on the show. I don’t even really like the fame part of it, that’s not the fun part of being on the show. I was the same girl — just with a new nose.

Since you also mentioned the career-making 2012 Rihanna “Supreme Bitch” hat moment in your book, what has her friendship meant to you?

I’ve definitely vocalized to her how much it’s all meant to me. She’s such a badass b*tch. She’s just the epitome of being the sh*t. There’s no one better or hotter or cooler than Rihanna, there just isn’t.

If given the opportunity to return to RHONY, which parts of your life would you like viewers to see more of?

My first season, I felt pretty out of place because I was out of place. Obviously I managed to make bonds with mostly all the women, but it would be nice if the audience got to see me in a group I felt was more my normal type of vibe. But on the other hand, I love how over-the-top the women are and how I’m just very different from them. The juxtaposition of me with Ramona and Luann [de Lesseps] is kind of hilarious. But the audience is never going to see your full true self because it’s a very small window into your life. Then there’s how much gets edited and all of that.

You’ve already said that you would return to RHONY if Bravo asked, but do you have a preference on which version, and do you still stand by that response?

I think it would depend on who’s going back and which show I’m going on and who’s going to be on the show. I trust the network execs and Bravo to kind of figure that out. I would love Tinsley [Mortimer] and Dorinda [Medley] to come back.

I was surprised that you and Eboni K. Williams grew apart after filming. How much did the filming process play into where things stand between you two now?

I think that me and Eboni had obviously just met each other that week before we started filming. It’s not the most conducive environment to build a friendship. Honestly, with her, even though I haven’t spoken to her, and Sonja, who I have blocked on Instagram…

Wait, what happened with Sonja?

I blocked her because I was so upset about her saying such bad things about Tinsley, and then me and my sister, in the Diamonds and Rosé book. But even with her, I’m in such a good place in my own life that I don’t hold any ill will toward any of the women. I would film with all of them again, tomorrow, if that’s what was happening. I’ve never said that I wouldn’t film with any of them, that’s insane, I’d completely do it. I thought that’s what was going to happen. So yeah, I think maybe we all needed this break.

Have any of the women reached out to you now that your book is out?

Not a single one? Does that surprise you?

No. Dorinda actually texted me and said, “Are you excited? I’m excited for you.” That was before the book came out. But I don’t think they even know. I think they’re all in their own worlds. I don’t have high expectations from them.

What Housewives-style tagline would you give this chapter of your life?

Oh my god, this is hard. “My anxiety is chronic, but my ass is iconic.”