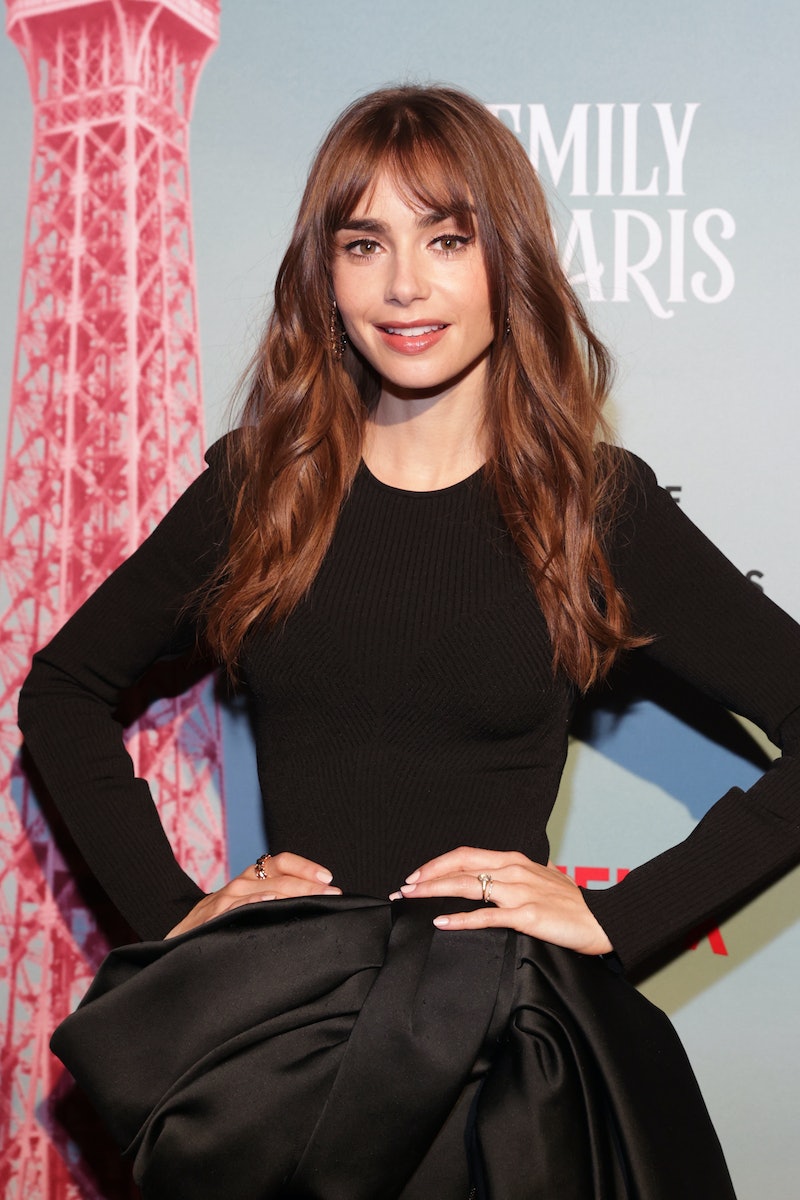 The latest misadventures of Emily Cooper have made their way onto Netflix, and at the same time, actor Lily Collins is having some of her own. The Emily in Paris star was walking down a New York City street recently when she came upon a sidewalk billboard advertising the show that had been vandalized. Her face, in particular, was targeted and given a demonic-looking makeover, but she took it all in stride and made a joke out of it.

Collins posted a video and a photo of the silly encounter on Instagram on Sunday, Jan. 2. First up was footage of her husband, Charlie MacDowell, walking on the sidewalk, seemingly unaware of anything out of the ordinary. That changed when he came face-to-face with his wife’s vandalized image. He comically pulled up short, and then turned and fled. Next, the Tolkien star posed for a photo alongside the billboard version of herself, making a show of looking outraged.

“I can’t say I love the new look, Em. But A for effort…” Collins captioned the post.

Her followers approved of her unbothered reaction. Fellow actor Bailee Madison was one of the many who commented, writing, “Hahahaha amazing.” Meanwhile, another person wrote, “I love you can laugh at this!”

The, er, artist behind the graffitied billboard will probably never be identified, but an amused Emily in Paris fan had a theory and was quick to point fingers: “Was Camille, I know,” the person quipped, adding a face-with-tears-of-joy emoji. It’s a solid suggestion. After all, the character, played by Camille Razat, has certainly had some reasons to be angry at Emily on the show.

Emily in Paris itself has drawn plenty of criticism since it debuted in October 2020, but Collins has seemingly maintained a positive outlook through it all. “As disheartening as it sometimes is to read these things, it’s also a gift; you’re being allowed to improve,” she told Vogue Arabia at the time. With Season 2, she felt the same way. Speaking to Glamour in December 2021, she said, “If there’s ever an opportunity to be better, do better, and have more representation and inclusion, you should run with it.”

So, no, it’s not a surprise that Collins would be able to laugh about someone tagging her billboard. Besides, it turns out the actor had already embraced New York graffiti. A day prior to sharing her run-in with the giant ad, Collins posted photos of her and MacDowell enjoying the start of 2022 in the city. Among the pictures was one of her posing alongside her name sprayed on a traffic barrier and one of her filmmaker partner alongside the word “Love” on a sidewalk. C’est la vie.

More like this
Ashton Kutcher Wants Danny Masterson “To Be Found Innocent” In Rape Retrial
By Jake Viswanath
Here’s Everything Coming To & Leaving Netflix In February
By Jake Viswanath
'Wednesday' Star Emma Myers Thinks A Wenclair Storyline Is “Possible” In Season 2
By Alyssa Lapid
'The Queen’s Gambit' Season 2 Tweet Wasn’t From Anya Taylor-Joy
By Mary Kate McGrath, Jack Irvin and Grace Wehniainen
Get Even More From Bustle — Sign Up For The Newsletter
From hair trends to relationship advice, our daily newsletter has everything you need to sound like a person who’s on TikTok, even if you aren’t.