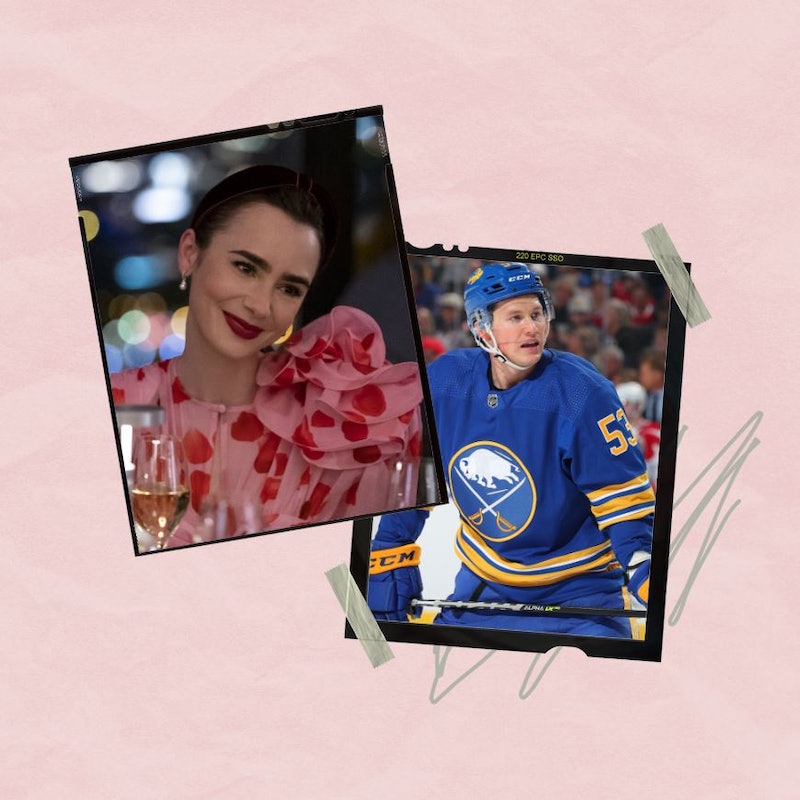 A good social media moment is Emily Cooper’s area of expertise on the hit Netflix series Emily in Paris, but no one scripted the hilarious real-life one delivered by an unexpected source on Thursday, Dec. 22. The Buffalo Sabres’ TikTok account shared the NHL team’s first video, and per Today, it showed winger Jeff Skinner on the ice telling defenseman Mattias Samuelsson about his excitement for Emily in Paris Season 3. Most “wholesome” of all, according to some fans, was how thoroughly excited he was that “this season she gets bangs!”

Sadly for Skinner, his teammate wasn’t on the Emily in Paris train — at least not then. Samuelsson can be heard asking Skinner, “What’s that?” in reference to the show. The defenseman also asked if it is his favorite show, but Skinner didn’t answer. The winger did, however, hype up the new season.

Now that the new episodes are out, the Sabres’ TikTok asked in the caption, “Did you finish it yet?” with the face-with-tears-of-joy emoji. While Skinner didn’t response, Emily in Paris star Lily Collins had something to say. She posted the video to her Instagram, writing, “Well this is one @emilyinparis crossover I wasn’t expecting…” Her co-star Ashley Park added four applause emojis in the comments.

On Twitter, the Buffalo Sabres shared an article about Collins’ reaction to the video and added, “Only Jeff.” Both the interaction and the team’s original TikTok brought a smile to many Sabres fans’ faces. Many shouted out the “she gets bangs” quote in the TikTok comments, with one adding, “a true fan and I’m here for it.” Another called Skinner “the Tom holland of the nhl,” and yet another called him “the most adorable hockey player ever.”

His love of Emily in Paris is real and unabashed. In January 2022, the Sabres posted footage from a practice in which Skinner was mic’d up, and once he extolled the virtues of the show. “How’s Emily in Paris?” teammate Vinnie Hinostroza asked him in a clip on Twitter. Skinner laughed, responding, “It’s a good show.” Between the two caught-on-camera moments, one fan wanted Collins to give the pro athlete a cameo. It’s not a bad idea. The show is renewed for Season 4, and Emily has been known to have a lot of love interests…

With enthusiastic fans like Skinner, Emily in Paris quickly became Netflix’s top show worldwide after Season 3’s Dec. 21 debut. Collins shared an image of it at the top of Netflix’s Dec. 24 chart, writing over it, “#1 in the world!! … What an amazing early Christmas gift!”

Correction: A previous version of this story misreported the name of the Buffalo Sabres. It has been updated with the correct team name.

More like this
Here’s Why Danny Masterson’s Hyde Isn’t In 'That '90s Show'
By Brad Witter
'The Crown' Season 6 Has Suspended Filming "Out Of Respect" For The Queen's Death
By Bustle Staff
Ashton Kutcher Wants Danny Masterson “To Be Found Innocent” In Rape Retrial
By Jake Viswanath
Here’s Everything Coming To & Leaving Netflix In February
By Jake Viswanath
Get Even More From Bustle — Sign Up For The Newsletter
From hair trends to relationship advice, our daily newsletter has everything you need to sound like a person who’s on TikTok, even if you aren’t.

This article was originally published on Dec. 24, 2022