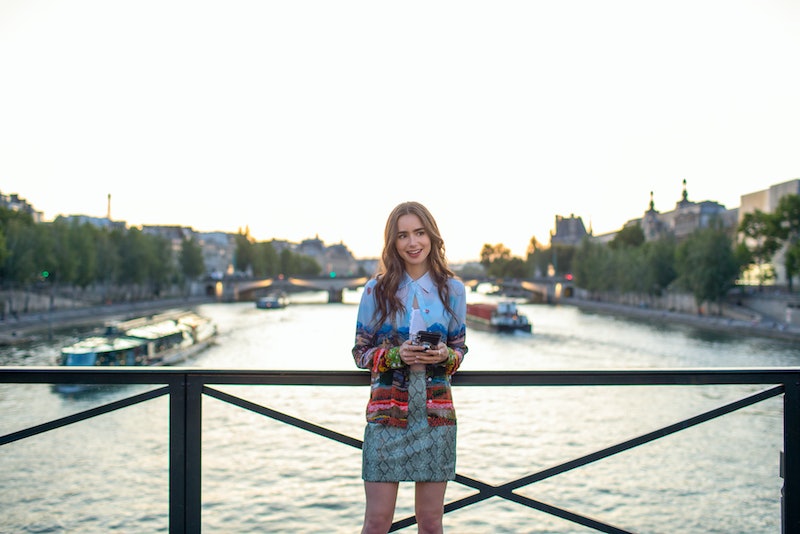 Emily in Paris viewers may not know Emily Cooper's exact age, but one thing's for sure: She's definitely not 22. Shortly after her comments sent social media into complete confusion, Lily Collins admitted she was wrong about her Emily in Paris character's age on her Instagram Story, with a post that made fun of herself for assuming Emily was so young.

"Emily looking at me when I get her age wrong," Collins captioned a GIF from the Netflix series of herself as Emily giving another character a side-eye. "Sorry girl. You might not be 22, but I gotta say – you do act like it sometimes!!!" Collins' post comes just two days after British Vogue published an interview in which the actor posited that Emily was "fresh out of college" during the course of the series.

"Maybe this is her first year after graduation. I want to say she’s like, 22-ish," Collins said. "She’s had enough experience at her company in Chicago to have earned the respect of her boss," who decides not to take a job in Paris and sends Emily instead. The actor continued, "She’s a smart cookie and really innovative. And this is not her first rodeo doing what she does. She’s gone to school for this, and she’s completed internships."

While Collins' comments made sense in terms of Emily's professional naïveté, several social media users pointed out that the character has a master's degree in communications, and it would be incredibly unlikely that she completed both undergraduate and graduate school before the age of 22. Plus, Emily would have to have worked at the Gilbert Group for at least a year in order for her boss — played by Kate Walsh — to feel comfortable enough to send her to Paris in her place. All in all, it's clear that Emily is older than 22, although how much older is still up for debate.

In a conversation with E!'s The Rundown, Lucas Bravo — who plays handsome chef and Emily's love interest, Gabriel — offered up his own theory about Emily's age. "I would say she's probably 24," he suggested, shortly after Collins' comments went viral. "Something happens after 26 where women start exploring...in terms of personality. I feel like she's still very strong willed and she has certainties, but yeah I would say [that she is] around 24." Bravo's theory does make more sense, considering it takes about two years to complete a master's degree, although the show's creator, Darren Starr, has yet to confirm whether or not his guess is accurate.

Regardless of how old she is, Collins does have an idea about why Emily is such a "fish out of water" when she arrives in Paris. "She’s not the person who travelled during college," the actor told British Vogue. "She was really, really focused on her jobs in the Midwest, and I don’t think she’s been abroad. ... If she had gone to a different company in Chicago, she would have been taken seriously – but in Paris, she’s not prepared for the cultural shift that she experiences at Savoir. Her only real experience of Europe is through movies and TV."

And as stereotypical as some of Emily's experiences in Paris may seem, Collins explained that many of them were based on actual things that happened to her when she was in the City of Light. "When I got to Paris for filming, I actually had so many experiences like Emily," she said. "I mean, the heating in my apartment broke for two weeks; I got the floor wrong in my building; my elevator stopped working… I even nearly stepped in dog poop. It’s a cliché, but it’s also a fundamentally human scenario. In the end, it’s all about Emily’s attitude; she just gets through it, and she does it with a little bit of humor."

More like this
'The Queen’s Gambit' Season 2 Tweet Wasn’t From Anya Taylor-Joy
By Mary Kate McGrath, Jack Irvin and Grace Wehniainen
Netflix Shut Down 'Bridgerton' S3 Rumours About A “Very Dark” Storyline
By Bustle
'RHOSLC' Star Jen Shah Refuses To Do A Post-Sentencing Interview With Andy Cohen
By Brad Witter and Jake Viswanath
'GoT' Star Emilia Clarke Says She "Just Can't" Watch 'House Of The Dragon'
By Brad Witter
Get Even More From Bustle — Sign Up For The Newsletter
From hair trends to relationship advice, our daily newsletter has everything you need to sound like a person who’s on TikTok, even if you aren’t.