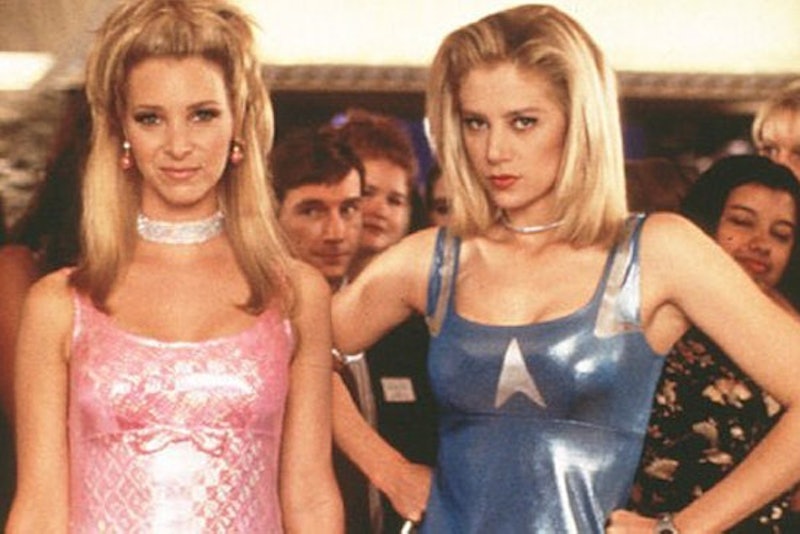 There’s no reunion like a high school reunion... or the reunion of a high school reunion. Romy and Michele’s High School Reunion stars Lisa Kudrow and Mira Sorvino reunited at the 2022 SAG Awards on Feb. 27, marking 25 years since the premiere of the 1997 cult classic comedy. Complete with nostalgic outfits and Post-it Notes, too.

Walking on stage to tune of Cyndi Lauper’s “Time After Time,” the soundtrack to the much-loved reunion dance, Kudrow and Sorvino translated their hot pink and baby blue reunion dresses into flashy pantsuits. “Do you think this is the cutest anyone’s ever looked at an awards show?” they asked. (Twitter’s response? A resounding “yes!”)

Kudrow and Sorvino were on hand to present the SAG award for Outstanding Performance by a Cast or Ensemble in a Comedy Series (“I just realised this, we’re wearing great ensembles while at the same time presenting to great ensembles,” quipped Sorvino).

Sealing their mini reunion with a chef’s kiss of a move, they shuffled about with Post-it Notes, which their characters were pretending to have invented in the film, before revealing the category winner: the ensemble of Ted Lasso. After the award show, Sorvino shared a sentimental look at their reunion on Instagram, posting an adorable video of her and Kudrow dancing to Cyndi Lauper’s hit, and calling her co-star her “4ever bestie.”

The pair have hinted at a sequel for years. Though Romy and Michele: In the Beginning (2005), starring Katherine Heigl and Alex Breckenridge, attempts to tell the story of the duo post-graduation in 1987, we’ve yet to see a film starring the original cast. In 2020, Sorvino spoke about her wish to reprise the role of Romy White, stating at The Creative Coalition’s sixth annual Television Humanitarian Awards: “I would be so grateful if they would decide to do it. I know that Lisa and Robin Schiff [screenwriter] are interested in it. I love Lisa and I would do anything just to work with her again in any capacity.”

Keeping fans on their toes, Sorvino echoed this in an interview with Jackie Willis at ET, remarking, “We always talk about it and we’re always open to it. We’d be very happy to revisit it as a sequel or a TV series. I think it would be so much fun. We’ve always loved each other.”