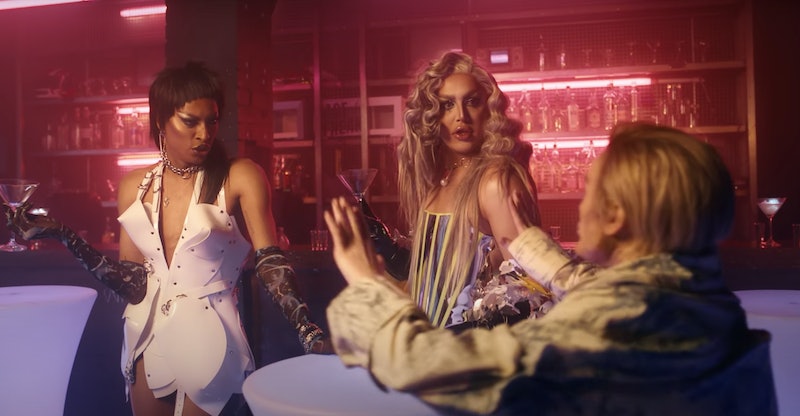 With cameos from some of the UK’s fave drag queens as well as drag king transformations, hilarious skits, and seriously sassy dance moves, Little Mix’s brand new Confetti music video has done more than just deliver – it’s practically a UK Drag Race episode in and of itself. And I’m here for it.

The five-minute video is set in a club-like venue (ah, remember clubs?) and sees Jade Thirwall, Perri Edwards, and Leigh-Anne Pinnock transform into the male versions of themselves, complete with fake beards and some hilariously dodge facial prosthetics.

In the fun and energetic video, Little Mix have a dance-off with their male alter-egos to the party pop banger, before “J-Dog”, “Lenny”, and “Pez” reveal who they fancy in a funny (and relatable) club toilet skit.

Meanwhile, UK Drag Race finalists Bimini and Tayce, along with semi-finalist A’Whora, are scene-stealers in the video. As “Pez” accidentally knocks over the queens’ drink, Tayce and A’Whora deliver the now-famous Tayce catchphrase – “the cheek, the nerve, the gall, the gumption, the audacity” – before Bimini steps in to say she’s “got it.”

U.S. rapper Saweetie, who features on the single, also makes an appearance in the cameo-packed video to perform her verse.

Announcing the new single and video Little Mix tweeted this morning (April 30): “The #Confetti video is hereeeee @Saweetie We're serving you looks, choreo and introducing you to three very special lads. We are so proud of this one hope you all love it!”

Confetti is the girl band’s first music video as a three-piece since former member Jesy Nelson decided to leave the group in December. As Bustle has previously reported, Nelson is now embarking on a solo career.

Following the rocky start to 2021, the Confetti party track feels decidedly upbeat, carefree, and fun, marking a brand new era for the hugely successful girlband (and hopefully for the rest of the UK this summer).

Speaking to Fleur East on Hits Radio, Leigh-Anne said: “It was probably the funniest day of my life. It was hilarious. It’s the best video we’ve ever done.”

Unsurprisingly, both Drag Race and Little Mix fans can’t get enough of the Confetti video.

For me, the video is a much-needed palette cleanser and an optimistic promise of parties and fun times ahead.

More like this
Here’s How You Can Watch The Grammys 2023 In The UK
By Emma Madden and Catharina Cheung
Harry Styles Just Split His Pants In Jennifer Aniston’s Face
By Sam Ramsden
This Girls Aloud x Sugababes Collab Still Hits All The Right Notes
By Sophie McEvoy
Harry Styles Had A Major Stage Malfunction At The Grammys
By Darshita Goyal
Get The Very Best Of Bustle/UK
Sign up for Bustle UK's twice-weekly newsletter, featuring the latest must-watch TV, moving personal stories, and expert advice on the hottest viral buys.