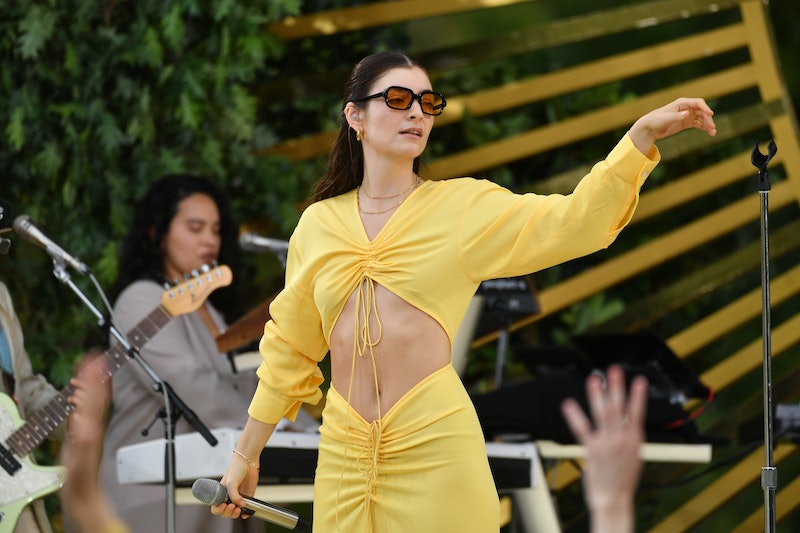 After spending so many months indoors, it’s felt revelatory to re-enter the outside world: The sun seems brighter, the flowers look more radiant, and the ocean is even more awe-inspiring. That may be why Lorde’s third album, Solar Power (out Aug. 20), feels so resonant right now. “The album is a celebration of the natural world, an attempt at immortalizing the deep, transcendent feelings I have when I’m outdoors,” the artist wrote in a newsletter ahead of the album’s release. In the four years since Lorde released her last album, Melodrama, fans have been anxiously awaiting her return (and keeping close tabs on her onion ring review Instagram account) — but no one could have predicted that her new songs would be quite so much fun in the sun. The album shows a new side of Lorde, as the singer-songwriter grapples with her anxiety about climate change while also celebrating the wonders of her native New Zealand, her hard-earned confidence, and the happiness she sees all around her.

The Jack Antonoff-produced album sounds like early 2000s bubble gum pop, mixed with the ’60s-era hippie culture of Laurel Canyon; the imagery is whimsical, new age-y, and totally emblematic of summertime. The psychedelic-inflected sound may be new, but Lorde’s lyrics, as always, remain largely autobiographical.

Below, see all the easter eggs you may have missed scattered across the album’s best lines:

Lyric: Born in the year of OxyContin

Meaning: Lorde was born in 1996, which just so happens to be the year Purdue Pharma introduced OxyContin, a synthetic opioid that has played a large role in the United States’ opioid epidemic.

Lyric: Arm in a cast at the museum gala

Meaning: Lorde is of course talking about the Met Ball, the huge, celebrity-filled affair that Vogue hosts annually at the Metropolitan Museum of Art. Lorde attended in 2016, wearing a gorgeous pastel Valentino number and a cast on her left arm.

Lyric: And I throw my cellular device in the water / Can you reach me? No, you can't (Aha)

Meaning: In May 2018, Lorde quit social media. This album was written in the years Lorde has spent offline, and she intends to largely stay off social media going forward. In a recent email to fans, she wrote, “The rumours [sic] are true — I’m not gonna be returning to social media this cycle, outside of the occasional temporary post, I guess. Being off social media makes me feel incredible — we can talk more about that another time — and I’d love to maintain feeling that good, and also build this really cool new zone with you guys.” Honestly, I can’t blame her.

Lyric: When Carole called my name / I stood up, the room exploded, and I / Knew that's it, I'll never be the same

Meaning: This is a sneaky mention of the iconic Carole King, who presented Lorde with her first two Grammys in 2014. That year, she won “Best Pop Solo Performance” and “Song Of The Year” for her breakout hit, “Royals.”

Lyric: Oh, once upon a time the Canyon store / Was where my world began

Meaning: Los Angeles locals know the lore and wonder of Laurel Canyon’s famous Canyon Store, a bodega that has been written about by the likes of Father John Misty and The Mamas and The Papas.

Lyric: Back to the kids in the lines for the new Supreme

Meaning: If you drive past Melrose Avenue on any given day, odds are you’ll see a huge line of guys waiting for the new sneaker drop. As this song is Lorde’s love letter to L.A., it only makes sense that she include some of the local sights.

Lyric: Well, my hot blood’s been burning for so many summers now

Meaning: In a letter to her fans, Lorde mentioned that she’s been skipping out on New Zealand winters for a few years now, spending the summer months in the U.S. and returning back to New Zealand in December, when the Southern Hemisphere has summer.

Lyric: We’d go dancing all over the landmines under our town

Meaning: Lorde grew up in Devonport, New Zealand, home to the Royal New Zealand Navy. Out of fear of a Russian invasion in the late 19th century, the military base planted controlled mines throughout the harbor to defend the coastline against enemy ships.

Lyric: From the Nissan, to the Phantom, to the plane / We'll disappear in the cover of the rain

Meaning: Much of the album references the climate crisis, and this line mentions some of the main contributors of Co2 emissions: cars (Nissan and Phantom are both auto brands) and planes. Lorde explained in her Spotify session, “This is me sort of talking to my parent’s generation, being like “Do you know what you’ve done? How could you have left us with this?””

If this song feels slightly familiar, it’s because it features the chords from Lorde’s hit “Ribs” in reverse. “Ribs” was on Pure Heroine, Lorde’s 2013 debut album, and that era was heavily on her mind while writing Solar Power. As she told Spotify, “This is future me talking back to her sort of saying, ‘It’s going to be okay.’”

Lyric: And your office job and your silver hair / But our shapes in the dark are the reason I’ve stayed / For all these years

Meaning: This lyric is likely a reference to her longtime (silver-haired) boyfriend Justin Warren, a promotions director for Universal Music New Zealand.

Lyric: And a throat that fills with panic every festival day

Meaning: Despite being an international pop superstar, Lorde grapples with anxiety on stage. Because of this, she’s opting for smaller venues for the Solar Power tour. “…I’m really shy, a big introvert,” Lorde said to the Wall Street Journal, “It’s not my natural mode to be a pop star — to be very outward — for big chunks of my life.”

Lyrics: I heard that you were doing yoga / With Uma Thurman’s mother

Meaning: In this song about a toxic man reinventing himself as a new-age dreamboat, Lorde mentions Uma Thurman’s mother, Nena von Schlebrügge. The former model is a devout Buddhist, a psychotherapist, and currently the executive chairwoman of the U.S. Tibet House.

Meaning: Get your tissues ready. In this song, Lorde writes about her dog, Pearl, who suddenly passed away from a heart attack in 2019. “I just wanted to say how much I loved him and how simple it was. There’s a certain feeling when you really love someone and I’m sure a lot of people have this about their kids — my dog was like a celebrity to me,” Lorde wrote in a newsletter, per CoupDeMain Magazine. “I saw him and I felt that feeling that people feel probably looking at their child, or they look at someone they really adore and look up to. He was like a star to me, and I just wanted to take his photo all the time and to look at him.”

Meaning: Here, Lorde imagines a future ravaged by climate change, where the world has heated up so much that we require SPF 3000 instead of SPF 50. “This song is set in a distant or not-so-distant future, one where the environment is unlivable, society has broken down, and we’re all escaping to our far-flung natural sanctuaries to start again,” she told Spotify.

Lyric: Transcendental in your meditations (Love and light) / You can burn sage, and I'll cleanse the crystals / We can get high, but only if the wind blows (Blows just right)

Meaning: To be crystal clear, Lorde has confirmed that this wellness-focused song is satire. As she dove deep into the ’60s flower-child culture, she found some throughlines to today. “One thing that occurred to me as a major parallel between that time and our time is our wellness culture and our culture of spirituality, pseudo-spirituality, wellness, pseudo-wellness,” Lorde told Apple Music. “Things like eating a macro-biotic vegan diet or burning sage, keeping crystals, reading tarot cards or your horoscope. These were all things that they were dabbling in back then, and that me and my girlfriends are dabbling in today.”

Meaning: According to astrological calendars, Pluto was last in Scorpio from 1983 to 1995, so Lorde is referring to millennials with “Pluto in Scorpio generation.” Pluto in Scorpio is said to be ruled by strong emotions, and those who were born under Pluto in Scorpio are free-spirited individuals who are coming of age in a broken world — but at least we have Lorde.

Lyric: It's a blue day / We could jump Bulli / When I hit that water / When it holds me / I think about my father

Meaning: Cliff jumping is a popular pastime in New Zealand, and this lyric refers to “Bulli Point,” a 7-meter jumping point located on the southeast shore of Lake Taupo (Taupomoana) in New Zealand.

Lyric: Little brother, I think you're an angel / I see your silver chain levitate / When you're kick-flipping / Baby boy, you're super cool

Meaning: Lorde’s younger brother, Angelo, inspired this lyric. “My little brother had been in a car accident and had had a concussion and was really lost and confused. And I wanted to say to him that it was going to be OK. I was thinking a lot about my parents and this deep connection we have to our land. I was thinking about my children,” Lorde told Apple Music.