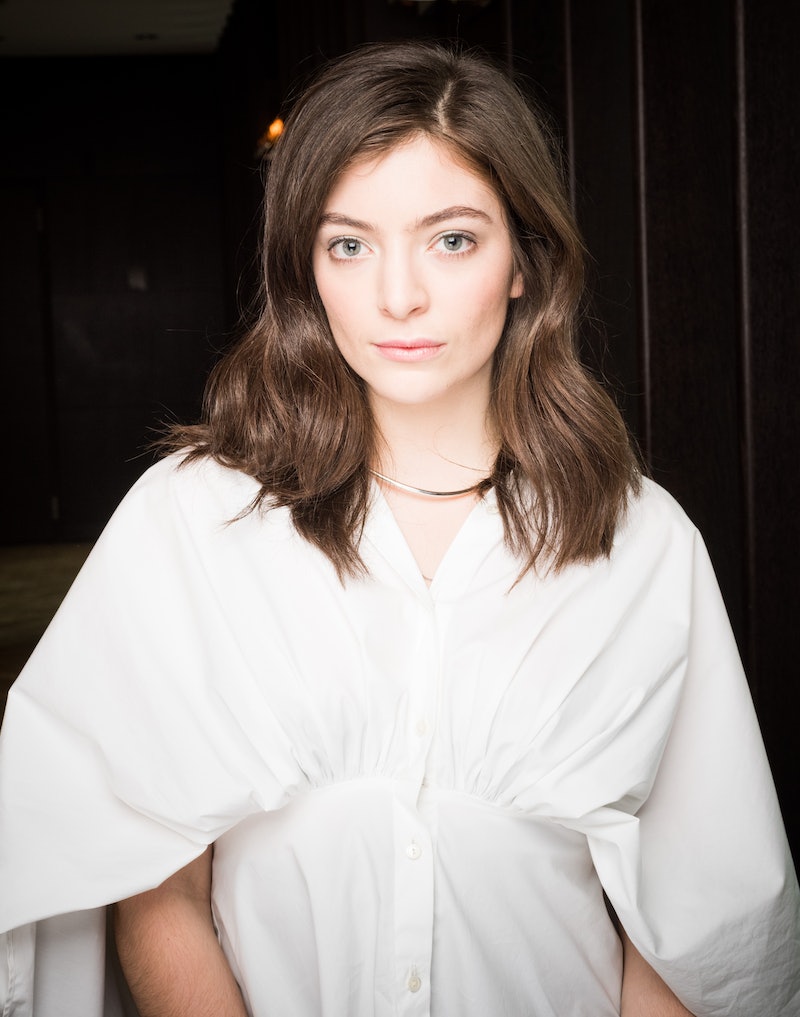 Lorde’s Melodrama album was released on June 16, 2017. Since then, her friend Taylor Swift released five albums; Billie Eilish launched her entire music career; Marvel Studios put out eight films; Prince Harry and Meghan Markle got engaged, married, and then stepped away from their royal duties; the United States voted Donald Trump out of office; and the entire globe endured a still-ongoing pandemic. What has Lorde done in that time? As far as we know, she grew a vegetable garden in New Zealand, took a trip to Antarctica, and released a book titled Going South about the voyage. Fans are famished for new music from the “Green Light” musician, which there’s been no sign of — until now.

As people all over the world are receiving their COVID-19 vaccines, the music industry is rolling out announcements for the safe, official return of concerts and music festivals. On May 25, Spanish festival Primavera Sound released the lineup for its 2022 iteration, and it’s stacked with the world’s biggest artists, including Miley Cyrus, Dua Lipa, Megan Thee Stallion, and Kacey Musgraves. But among the long list of names, fans were drawn to one in particular: Lorde! Yes, you read that correctly: Lorde’s first live show since she finished touring Melodrama in 2018 is officially set to go down on June 10, 2022.

Of course, fans immediately began to wonder if the festival announcement signals that Lorde’s third album is finally on its way. It’s not an outlandish assumption: she already told fans in a 2020 email that she’s been working on new music. Furthermore, Primavera Sound allegedly published a detailed announcement claiming that Lorde’s new album is officially coming. According to a screenshot posted by Twitter user @moranmark13, the festival’s website read:

“We could not celebrate an edition of Primavera Sound in 2022 without counting on those artists ... whom we have been waiting for years ... [like] Lorde, who will emerge from her retirement with her third album after her unforgettable visit in 2018.”

However, the website currently boasts less detail: “Lorde, who will emerge from her retirement after her unforgettable visit in 2018.”

Another Twitter user (@djespinoza5) compared the current text to the album rumor and tweeted in all caps: “THEY TOOK OUT THE THIRD ALBUM PART WHICH MEANS THEY LIED OR SHE WANTS TO ANNOUNCE IT HERSELF WHICH MEANS IT COULD BE HAPPENING SOON SINCE PRIMAVERA ALREADY SPILLED THE BEANS.” The fan is speculating, but Lorde toured festivals like Governor’s Ball and Coachella in the months leading up to Melodrama’s release. So, she could do the same for her forthcoming album.

Still, the most concrete evidence we’ve had of a new Lorde album’s existence is from a series of emails the musician sent out to fans over the seemingly everlasting pandemic. In a May 2020 email, she noted that her recent hair growth means the album is on its way. “You’ll probably be pleased to know my hair is big and long again,” wrote Lorde. “I think after Melodrama came out I said I wouldn’t put out another record until my hair was long— both because hair takes time to grow, and I knew I needed time, and because I knew the next record would require the longest and wildest hair yet.” We don’t know what that means, but we’re here (hair?) for it.

In the same email, she let fans know she’d been back in the studio since December 2019 and is working with frequent collaborator Jack Antonoff on new tunes to come. “Jack came over to work in the studio in Auckland, and I went to LA. It flowed. A thing started to take shape. And then, of course, the world shut down,” she continued, noting that the pandemic slowed the process. “We’re still working away — Jack and I FaceTimed for over an hour this morning going over everything. But it’ll take a while longer.”

Concluding the message, she detailed her excitement toward eventually playing festivals and touring again — and even hyped up her forthcoming material: “The work is so f*cking good, my friend. I am truly jazzed for you to hear it.”

In October 2020, as reported by PopCrave, the musician broke her multi-year Instagram silence to urge fans to vote in the New Zealand election and hint at new material to come — potentially in 2021. “Do it for our beautiful country and for me,” she wrote. “And next year I’ll give you something in return.”

The following month, Lorde sent out another email to share her experience traveling to Antarctica and announce her Going South book with a cheeky teaser: “Well, I’m here in your inbox because I have some exciting news. Not that news. Don’t get too excited. Just a moderate amount.” She really has some audacity for that one, but she didn’t leave fans hanging completely. “The book is a sort of precursor to this album in an abstract way,” she continued. “It’s a cool little piece of the Lorde cinematic universe for you to own if you’d like to.”

Another sliver of hope for Lorde’s new album has been the surprise return of her infamous onion ring review Instagram account, which she last posted on mere days before the release of Melodrama. In case you don’t remember, the singer was rumored to be running @onionringsworldwide after fans noticed she was one of the few people followed by the account. During a 2017 appearance on The Tonight Show With Jimmy Fallon, she revealed herself as the mastermind behind it.

“I have to explain for a second, here's the thing,” Lorde told Fallon. “I sort of naively didn't realize that it would be a thing, that I was going to different places and trying the onion rings at each of those places … I feel like it reads like the kind of thing a pop star would do to look relatable, which I wasn't! It was a funny thing with my friends on the tour.”

Once fans figured out Lorde was running the page, she shut it down — until December 2020, when she posted a photo of two onion rings with the caption: “Don’t call it a crumb back...” She then posted several onion ring reviews in a row the same day, but it’s been crickets on the account ever since.

On June 7, fans decided they were fed up with overanalyzing Lorde’s love of fried food and began spreading around a leaked — and quite peachy — photo of the singer leaping on a beach, in front of the sun, with no pants on. Typed atop of the photo were the words “Solar Power,” aka the rumored title of an upcoming Lorde single, leading fans to believe the photo is the song’s cover artwork. Hours after it made the rounds on social media, the singer updated her website with the rumored artwork and the text: “Arriving in 2021 ... Patience is a virtue.” A cryptic teaser, or shade thrown towards fans for spreading the leaked photo before she was ready to reveal it?

Fans’ suspicions were confirmed as Lorde’s new single “Solar Power” was uploaded to streaming services early on June 10, though it was quickly taken down. Later in the day, the catchy, sweeping acoustic track was re-uploaded for its official release alongside a music video featuring Lorde frolicking along a picturesque beach, smoking out of a fennel plant, and moving to the beat surrounded by a flurry of dancers. In an email sent out alongside its release, the singer revealed that her third album is also titled Solar Power. “The album is a celebration of the natural world, an attempt at immortalising the deep, transcendent feelings I have when I’m outdoors,” she wrote. “In times of heartache, grief, deep love, or confusion, I look to the natural world for answers. I’ve learnt to breathe out, and tune in. This is what came through.”

Lorde told fans to “look to the natural calendar for clues,” and considering “Solar Power” dropped on the same day as 2021’s only solar eclipse, news from the musician was anticipated to come on June 21, aka the summer solstice. And as expected, the musician came through with yet another email to let fans know that Solar Power will officially be released on August 20. She also revealed its tracklist, including twelve songs and two bonus tracks, and announced The Solar Power Tour, set to hit “theatres and green fields” worldwide in 2022. Check out the song titles below:

Additionally, in a unique move to honor the environment, the musician shared that she will only be releasing her album on vinyl, not on CDs “that would end up in a landfill in 2 years.” However, she will be putting out a first-of-its-kind discless version called a “Music Box,” entirely made of 100% biodegradable eco-friendly materials. “I decided early on in the process of making this album that I also wanted to create an environmentally kind, forward-thinking alternative to the CD,” she detailed in the June 21 email. “I wanted this Music Box product to be similar in size, shape and price to a CD, to live alongside it in a retail environment, but be something which stands apart and that’s committed to the evolving nature of a modern album.”