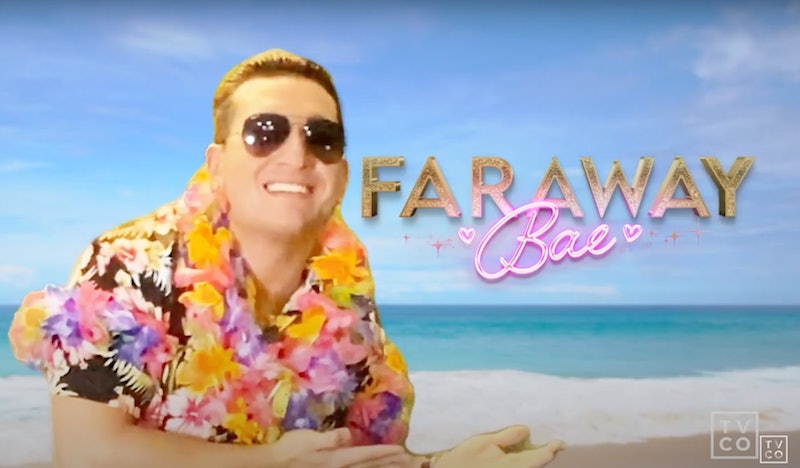 Remember early reality TV quarantine bliss when we all collectively streamed and buzzed about Love is Blind and The Circle — and the world was not burning just yet? Well, TVCO, an interactive platform for people to connect over TV, is looking to recapture that feeling with the trailer for Faraway Bae, a virtual dating series that is, quite literally, the ultimate Love is Blind and The Circle crossover. The series, set to premiere on Sunday, Aug. 9 on TVCO, will center on Love is Blind alum Diamond Jack as she searches for love — and it'll be hosted by none other than The Circle winner Joey Sasso.

In the trailer (one that could only be seen to be believed), Sasso appears in front of a variety of virtual backgrounds to announce the new series (ah, the power of a green screen). “Over the course of one week, our bae is going to be meeting, chatting, and getting to know six contestants, all looking to win her heart,” Sasso says in the clip. Jack and the contestants will get to know each other through a variety of (virtual) challenges, games, dates, and more. Each live episode will end with an elimination round until one suitor remains. The series will also be an interactive experience for fans, who will be able to ask questions and even select the dates.

In addition to hosting, Sasso will also provide guidance throughout the one-week dating process. “You can do this,” Sasso says to no one in particular in the trailer. “We will find your love.” In a statement issued to Entertainment Weekly, Jack expressed her excitement for the “unconventional” experience. “As everyone knows, I’m all in favor of unconventional dating experiences and I have seen firsthand that they can work,” she said. “I can't wait for Joey and the live audience to help me find my soulmate.”

Love is Blind and The Circle both debuted on Netflix earlier this year and became breakout hits among streamers. Sasso won the first season of The Circle, a social experiment and competition show hybrid where contestants flirted, befriended, and catfished their way toward $100,000. Meanwhile, Jack was a standout contestant on Love is Blind, a series that followed singles who must meet and fall in love without ever seeing each other face-to-face. She left her fiancé, Carlton, during their pre-wedding honeymoon after a big fight. Both Love is Blind and The Circle were renewed for a second season in March, set to return sometime in 2021. Until then, perhaps Faraway Bae will fill those reality TV voids.

More like this
Everything To Know About 'RHONY' Season 14
By Jake Viswanath and Alyssa Lapid
Colleen Explained Her 'Love Is Blind' Body Language After Concerned Fan Reactions
By Grace Wehniainen
Wataru & Midori From 'Love Is Blind: Japan' Are Having A Baby
By Kadin Burnett
Twitter Is Still Reeling Over Tyler’s 'Strictly' Exit
By Sophie McEvoy
Get Even More From Bustle — Sign Up For The Newsletter