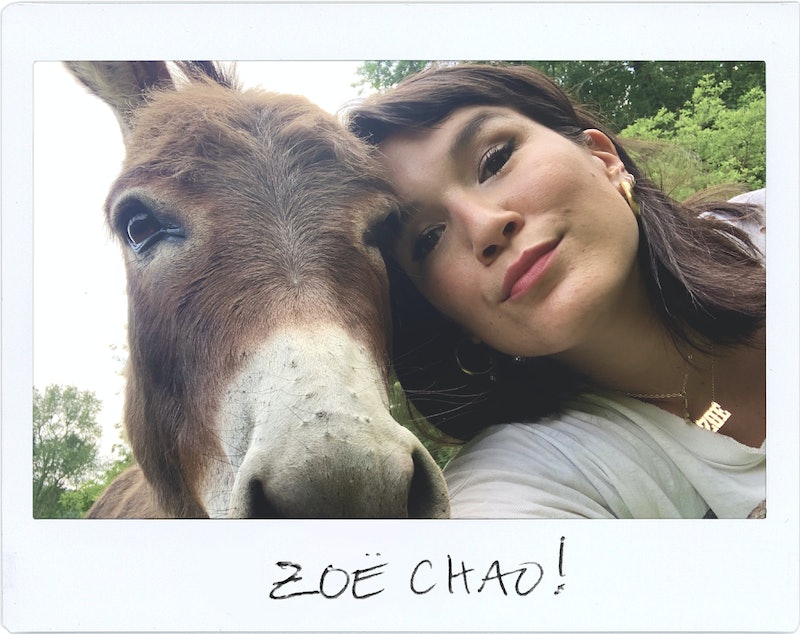 When celebrities (virtually) hang out with Bustle writers, we want to give them the chance to leave their mark. Literally. So we hand them a pen, a piece of paper, a few questions, and ask them to get creative. This time, Love Life star Zoë Chao is leaving her mark in the Bustle Booth.

Zoë Chao is snug in her sleeping bag, sitting in her car as we talk. After spending the past few months in rural New Hampshire, she's on day three of a westward bound camping trip, heading first to Arizona to see her 96-year-old grandfather, then to Idaho. But in between leaving her New England idyll and hitting the road, Chao stopped home in New York, which also happens to be the set of her new show Love Life.

“It was really a shock,” Chao says of the 36-hour touchdown in Prospect Heights last week, as Brooklyn took part in international protests over the killing of George Floyd. “I was so moved by the thousands upon thousands of people who were rallying in the streets, and we took to the streets as soon as we could,” she says. She might be parked on the outskirts of Nashville now, but her mind is still fixed on the national story playing out close to home. “It's just so wild to be navigating this explosive time while getting to see how beautiful this country is.”

The streets of New York are an unavoidable topic of conversation for us. They're on full display in the HBO Max rom-com in which Chao plays Sara Yang, a twenty-something who oozes unapologetic bravado if only to obscure her hopelessness about the future. Her first day of shooting was in the East Village on St. Mark's Place; the cast was in the midst of reshooting around New York when the pandemic shut down filming. The inadvertent result is a show that feels like an up-to-the-last-possible-minute diary of how the city was breathing and moving before the coronavirus and before the death of Floyd ignited a national debate about racism and policing. Now, Chao sees the show as a sort of time capsule. “I do feel like New York will find its way,” she says. “It won't be the same New York, but it'll be New York.”

Love Life is also a time capsule of this moment in Chao’s career. “I loved that crew and that creative team and the cast,” says Chao, who credits co-showrunner Sam Boyd for helping her grow as an actor. “To have somebody's voice that steady in their belief in you really allows you this confidence and permission to just go for it,” she tells me. “My heart hurts a little bit, because I miss it so much.”

As for what comes next, Chao would love to know. She has projects she’s excited about, but with no clear roadmap for how and when the Hollywood machine starts running again, she’s content to be staring down a summer on the road. Two nights ago she was in Sperryville, Virginia; tonight, well, she’s not sure. Her partner has rigged a solar shower, and they’ll be back in July. Or maybe August. Ever the actor, she adds: “There might be some improvisation.”

More like this
Keyla Monterroso Mejia Is Finally The Star Of The Show
By Gabrielle Bondi
Everything To Know About 'And Just Like That...' Season 2
By Jack Irvin and Grace Wehniainen
Claire Foy Spoke Out About 'The Crown's Gender Pay Gap
By Sam Ramsden
'Bridgerton' S3 Will Show A *Very* Different Side To Kanthony
By Sam Ramsden
Get Even More From Bustle — Sign Up For The Newsletter
From hair trends to relationship advice, our daily newsletter has everything you need to sound like a person who’s on TikTok, even if you aren’t.