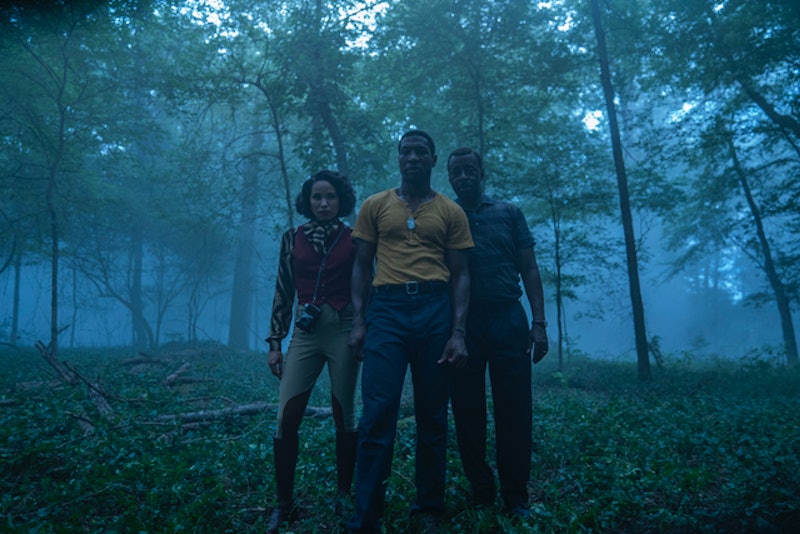 Following a Black man road-tripping across the U.S. in the 1950s, HBO's Lovecraft Country creates a classic (and horrifying) pastiche of mid-century America. But while the first episode sees stops to a number of different American locales, Lovecraft Country was actually only filmed in two states.

The show opens with Korean war vet Atticus "Tic" Freeman on a bus to Chicago that makes a brief stop in Kentucky. Once in Chicago, Tic learns that his father is missing, and that he left him a letter detailing his supposed long-lost inheritance in Ardham, Massachusetts. So, he piles into a car with his uncle George and friend Leti Lewis and sets out for Ardham. The three make a harrowing stop in a town called Simmonsville and another in the woods of Devon County, Massachusetts before finally reaching their destination, where a creepy man ominously welcomes them into a mansion.

By Episode 3, they're back in Chicago after finding Tic's dad and surviving the horrors that awaited them in Ardham. The show's Chicago scenes were in fact filmed in Chicago, with the Pilsen neighborhood being transformed to look like it did 65 years ago. But if you're searching Google Maps for Simmonsville, Ardham, and Devon County, you're going to come up empty. All of these places are fictional, which allowed the series to use the state of Illinois as a stand-in for other areas of the country. The cities of Elburn and Woodstock represent Simmonsville, while other scenes were filmed in the towns of Marengo, Hebron, and La Salle. Some road scenes were filmed along Route 52 in Ogle County, while the Devon County woods were actually southern Illinois' White Pines State Park.

As for Ardham, that fictional corner of Massachusetts has mainly been represented by Georgia. According to Atlas of Wonders, the town's mansion is Bisham Manor, a historical estate in LaGrange, Georgia that was also featured in Netflix's The Haunting of Hill House. The woods just outside the mansion were partly filmed near Conyers, Georgia, while another famous mansion, the Parrott-Camp-Soucy House in Newnan, also appears in the show. Finally, the city of Macon, and specifically its downtown area, appear in Lovecraft Country as other towns. Filming for Lovecraft Country that wasn't done on location took place on soundstages located in studios in Chicago and Atlanta.

Through the lenses of its Georgia and Illinois filming locations, Lovecraft Country is able to create a terrifying tapestry of a mid-century America filled with sundown towns, vicious racists, and woods-dwelling monsters from the Midwest to New England. It makes for one scary road trip — and not just because of the Lovecraftian creatures.