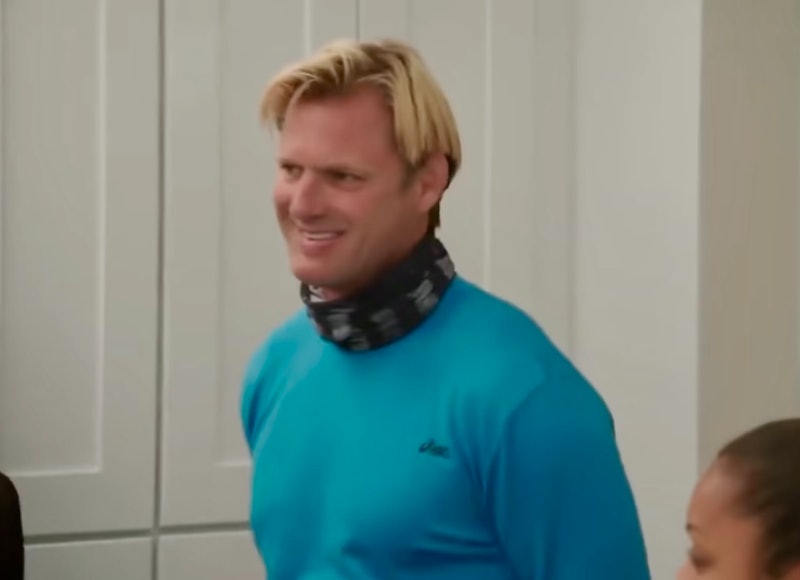 Luann de Lesseps has a new boyfriend in The Real Housewives of New York City Season 13, and the rest of the cast seems to have mixed reactions. “Garth, Garth, Garth, it’s always Garth,” Sonja Morgan complains in one scene, while new cast member Eboni K. Williams jokes, “No wonder Luann’s so [bleep] happy.”

As fans will learn, Luann’s latest paramour is Garth Wakeford, a South Africa native who played professional rugby and now works in the fitness industry. Ahead of his official debut on the show, here’s everything else to know about him and his relationship with Luann.

Now a personal trainer and wellness coach, Garth credits a near-death tractor accident in his teens for providing the foundation for his current career. According to his website, he “learned how to refine exercises prescribed by health professionals to enhance his own healing,” ultimately realizing “that the body can do amazing things when the mind is strong and determined to succeed.” A National Academy of Sports Medicine certified personal trainer, he created East Hampton’s Juluka Fitness after working for 12 years at Manhattan’s exclusive La Palestra club. Juluka Fitness offers a unique outdoor high intensity interval training (HIIT) class in addition to a variety of other outdoor activities including paddleboarding and trail walks/runs.

Garth’s Instagram is currently set to private. He still has a public Twitter account, but his page only includes about a dozen tweets and he hasn’t posted anything since February. In his Twitter bio, Garth describes himself as an animal lover who’s “grateful for everything entitled to nothing.”

Garth was previously married to attorney Jennifer A. Borg, the great-granddaughter of the original owner of New Jersey’s The Record newspaper. A February 2017 announcement of her hiring at New Jersey’s Pashman Stein Walder Hayden law firm stated that she was living in Manhattan with Garth and their two English bulldogs at the time. It’s unclear when they got married or how long they were together, but there are photos of the couple attending various events in the Hamptons and New York City between 2010 and late 2017.

Rumors that Luann and Garth were dating began in November when they were photographed having lunch at Hamptons restaurant Tutto il Giorno. Soon afterward, Luann confirmed their relationship on the Nov. 18 episode of the Ex Appeal podcast, revealing that they met on a dating app. The Countess said she’d been using Hinge and Raya, and when she saw Garth’s profile, she thought he was “too good to be true.” After matching, they went on a coffee date, and the 6-foot-6-inch athlete lived up to her expectations. “I said, ‘Oh, my God! He’s exactly what he looks like on the app,’” she recalled. “He’s tall, he’s handsome, he looks like a Viking.”

Are Luann & Garth Still Together?

Luann and Garth’s relationship was ultimately short-lived. After rumors surfaced on the Deux Moi Instagram account that Garth had cheated on Luann, both he and the RHONY star denied any infidelity, announcing to Page Six on April 2 that they had broken up several months earlier. “Garth and I stopped dating before the holidays, and I only wish him well,” Luann told the outlet. Garth, for his part, claimed that he had no relationship with the woman in question and said she only came to his exercise class once. “We follow each other in Instagram, and that is it,” he added.

Luann later opened up more about their whirlwind romance on the May 13 episode of Access’ Housewives Nightcap, sharing that she’s currently single but casually dating. “Garth and I had a great relationship during COVID. It was a COVID sizzle and then it fizzled — and that’s OK,” she said. “We’ve moved on, and I’m dating. I met somebody in Mexico, so I’m seeing him once in a while. But I’m single and always a hopeless romantic. Never say never.”