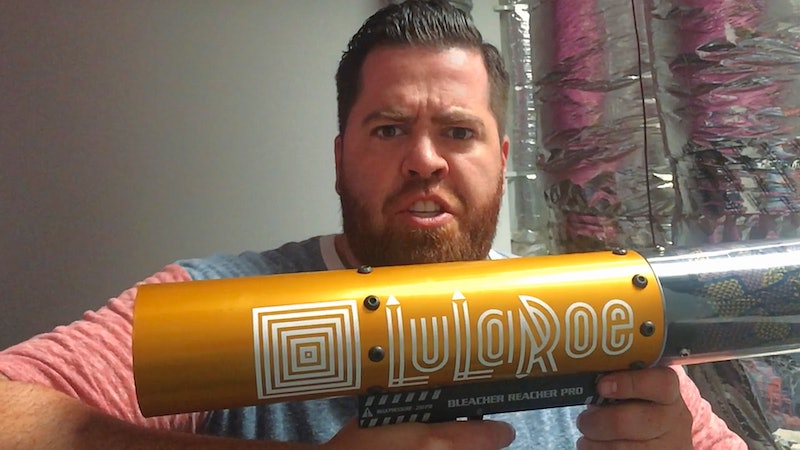 Amazon Prime’s docu-series LuLaRich traces the meteoric rise and fall of multi-level marketing (MLM) company LuLaRoe, featuring interviews with LuLaRoe’s co-founders, DeAnne and Mark Stidham, as well as their family members and former employees. One of those interviewed, Sam Schultz, is both: He’s DeAnne’s nephew, and he ran events for LuLaRoe between 2015 and 2017. Nowadays, he speaks out against LuLaRoe — but he’s been in trouble with the law himself. So what is he doing now?

Schultz was involved in legal drama before LuLaRoe.

According to a 2014 report from a local news channel KUTV, Schultz once owned a restaurant called Sammy’s in Provo, Utah. His employees alleged that they weren’t paid on time, and were owed back wages from Schultz. Two of these employees, instead of suing Schultz, acquired Sammy’s and promised to pay their employees fairly and on time. (Schultz disputed their description of events, but when given the opportunity to go on camera to explain the situation, instead said, "Things have been resolved internally. Going on camera isn't needed.")

He worked for LuLaRoe as an events manager.

Schultz was the events manager at LuLaRoe starting in 2015, and according to Bloomberg was tasked with hosting conferences to attract consultants. “I thought, look, these women don’t want to feel like they’re getting recruited … They’re probably desperate housewives, vulnerable, they want to feel more beautiful, more confident — what woman doesn’t, you know?” he said of his job. “It was just promising them a dream of making money.”

Schultz says he expressed qualms about LuLaRoe’s business dealings, quit in 2017, and has since spoken out against the company. (In LuLaRich, some former consultants allege that he was pushed out over sexual harassment allegations; he disputes this.)

He may have also worked for another family company.

A Twitter account that appears to belong to Schultz repeatedly referenced a company called Piphany in 2018 and 2019.

Piphany is also an MLM, and was started by DeAnne’s twin sister, Dianne. According to Buzzfeed News, in the early days of LuLaRoe — before the company was even called LuLaRoe — DeAnne and Dianne were both working on the business. It’s unclear how their partnership ended, but Dianne’s daughter-in-law said that LuLaRoe “fractured the family.” Later, Dianne founded an MLM clothing business called Honey & Lace, which would change its name to Piphany. In 2019, LuLaRoe sued Piphany, alleging the company was poaching its consultants. The two parties successfully mediated in 2019. (Piphany’s website no longer appears to be active.)

He faced felony charges for another, separate investment.

Schultz was arrested in 2019 for “communications fraud and theft by deception,” and was hit with 26 felony charges for allegedly soliciting investments for a fake marijuana farm. At the time, according to court documents, he was in a band and working as the co-founder of promotional company Seventy3 Events. He pitched himself to friends and family as a facilitator for a “pot farm run by some kind of Polynesian gang or mafia” located in Oregon. In total, 13 “investors” gave him $323,000. The farm apparently never existed; Schultz instead used the money to pay an individual named “Soi,” who’d allegedly told Schultz about the pot farm opportunity, and promised Schultz a large return on his investment. Neither Schultz nor the other investors have reportedly seen any money from Soi.

Schultz says he met Soi through connections in the music industry. During media coverage of the case, musicians alleged, separately, that they’d paid Schultz as a music promoter and that he didn’t hold up his end of the deal. “He would not pay us for shows,” one musician, Rilee Nicole, told KSL TV. “He would make all sorts of promises and not keep them. He would disappear at times and just a lot of things would go wrong.”

Schultz has since been involved with other businesses.

According to a private Instagram account that appears to belong to Schultz, he’s living with his current wife Katy (they’ve been together since 2018, according to Facebook) and raising a blended family of six kids.

Another Instagram account, @raddadschultzclan, appears to be run by Schultz as well, but has been inactive for a year. The account’s posts feature family photos alongside references to businesses like @bigbouncebash, which puts on family events. (Big Bounce Bash’s website appears to be inactive.)

That account also references a new company called Beehive Connect. In February 2020, Schultz announced that he and his wife were launching a marketing company called Beehive Connect; its Facebook page is now named Hive Marketplace, and the current description calls it a “digital marketplace & service platform for independent businesses.” Hive Marketplace’s most recent Facebook post was added in July 2021, but its website appears to be inactive.

On Facebook, Meagan Parker, who purports to run a clothing company called Fourever Lane, called Schultz one of her ambassadors in a July 2021 post. “Sam Schultz is back to build again! The gang is back together & I am STOKED to say the least,” she said in another Facebook post. The company’s website does not appear to be active.

More like this
The Mysterious Gunther Corporation From 'Gunther’s Millions' Has Dissolved
By Brad Witter
A 'Terminal List' Sequel & Spinoff Are Reportedly In The Works
By Kadin Burnett and Grace Wehniainen
Everything To Know About The 'Daisy Jones & The Six' TV Series
By Maxine Harrison and Brad Witter
A New Netflix Doc Will Explore The Unsolved Murder Of Jill Dando
By Sam Ramsden
Get Even More From Bustle — Sign Up For The Newsletter
From hair trends to relationship advice, our daily newsletter has everything you need to sound like a person who’s on TikTok, even if you aren’t.