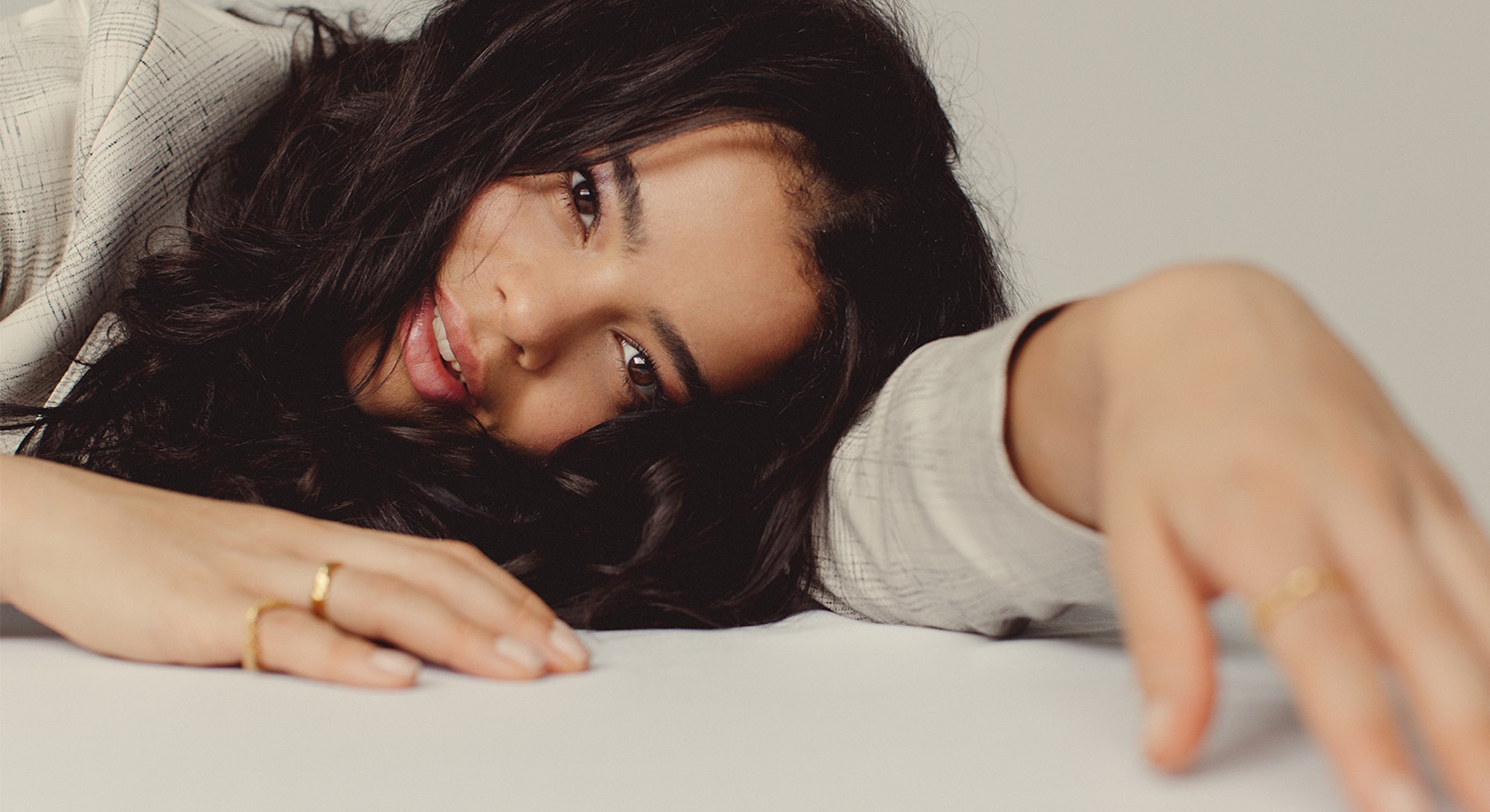 Had it been up to Russell T. Davies, the screenwriter behind the devastating drama It’s A Sin, the series would have been eight episodes, not five. It’s sad news for those of us who have fallen hard for the close-knit crew of the Pink Palace: rambunctious Ritchie, spirited Roscoe, handsome Ash, reserved Colin, and, of course, the one and only Jill, played with great compassion and increasingly steely resolve by 27-year-old British actor Lydia West.

“She’s driven from a place of love and care,” West tells me over Zoom from her Hackney home. “She sees what's happening to her friends, and she wants to do something about it.” Davies recently told Damian Barr's Literary Salon that he had originally imagined an extended ending for Jill. The final episode would fast-forward three decades to find Jill still working in health care and feeling a little lost. “I was so shocked,” West says. “But it makes sense. I mean, jumping a couple of years into the future is what Russell does best.”

Even without the timehop and extra episode, Jill remains one of the show’s most cherished characters. She’s the first of her friendship group to take the crisis seriously, arming herself with information and understanding at a time in which both were in short supply. Her speech during the seaside confrontation between the chosen family of Ritchie (Olly Alexander) and his biological mother was especially impactful. “I was very aware of not making that scene indulgent,” West says. “It’s so powerful it would be easy to overplay it.”

When the show aired on Channel 4, #BeMoreJill began to trend online alongside every episode, with thousands sharing the stories of the Jills in their own lives. “It’s a humanity that we can all connect to,” West says. “We’ve all, at some point, been that loving friend or family member. In times of crisis, we learn how to move forward. We show up for people we care about.”

Born in London, West grew up surrounded by people showing up. Her mother worked as a nurse providing care to AIDS patients in the 1980s, while her father worked in the charity sector. West herself originally studied business at university; she “hated it,” according to an interview with British Vogue, which is perhaps unsurprising given that she describes growing up with an “overactive imagination.” Unable to pursue her dream career in dance after an injury at the age of 15 and frustrated by the lack of creativity in her post-university PA role at a cryptocurrency company, West turned to acting. It wasn’t long before completing a course at the Identity School of Acting that she landed a role in Davies’ Years and Years and the BBC’s Dracula remake after that. “I see acting and storytelling as freedom,” she explains. “It is an opportunity to step into someone else’s shoes and experience different worlds and different lives. My main focus in performance is entertaining people.”

Next, West will do just that in TV thriller Suspicion alongside Uma Thurman and romantic drama A Text for You, which stars Priyanka Chopra and Céline Dion. Who is a future dream collaborator? “I would love to do a cheeky two-hander with Viola Davis! She’s such a powerhouse.” She reels off a long list of other “amazing women… creating incredible, transformative content,” including Issa Rae, Shonda Rhimes, Regina King, and Zendaya, which makes me wonder how she feels about some of the criticism of Jill’s selfless narrative in the drama. Jill delivers meals, doles out pills, holds the hands of strangers who have no one else. It’s a quasi-maternal role, while the actual mothers in the series veer from Colin’s mother, Eileen (Andria Doherty), who exemplifies the saint-like care of women, and Ritchie’s mother, Valerie (Keeley Hawes), as the cruel foil.

“I think when you’re creating a drama that is 46 minutes per episode and you’ve got five episodes, you need to choose carefully what story and points you’re trying to put across,” West says when I ask if she imagined Jill’s life beyond the screen. “This story is a celebration: a true drama of friendship, of love, of loss, so I just don’t see how any additional information on Jill is necessary. It doesn’t make her any less of a character or detract from who she is. She’s a very full-spectrum human with so much personality and depth.”

Perhaps that depth is easier to find given the character was based on Jill Nalder, Davies’ dear friend. Nalder also plays Jill’s own mother in the show, something West discovered by text the night before the initial read-through. “I kind of had an out of body experience; I don't think it properly registered,” recalls West. “I arrived at the read-through and I couldn't really look at her because I was too emotional. It got to the end of Episode 5 and we were all in floods of tears. I looked over to her, and she just smiled at me.”

Despite all the tears — from the cast and from its viewers — It’s A Sin is defiantly joyful too, both on and off screen. The cast devised a whole detective show game during breaks — “I was the chief detective, and so was Olly [Alexander]. Omari [Douglas] was the witness and the victim and everyone in between” — as well as hosting daily dance parties and catwalks with the entire cast. At one point, the production team got involved — Davies and visiting Channel 4 and HBO Max executives included — shimmying through West’s trailer to George Benson’s “Give Me the Night.”

West has tried to keep her trailer parties going since, though as she reflects a little ruefully on a recent project, “I didn’t have anyone to invite because it’s all COVID restricted.” But she’s still dancing to Victoria Monet’s Jaguar and Arlo Parks’ Collapsed in Sunbeams, whether she’s warming up for work or just grooving in her living room. “I’ve had amazing opportunities in the two years of my short-lived career so far,” she grins. “I just hope I can continue this for many, many years to come.” Perhaps even as Jill again, if opportunity called? “I believe we had our own closure to this season… and Russell has made it clear there isn’t going to be a second,” she reflects, before quickly adding with a laugh, “but I’d be happy to return in full prosthetics as a 50-year-old Jill.”