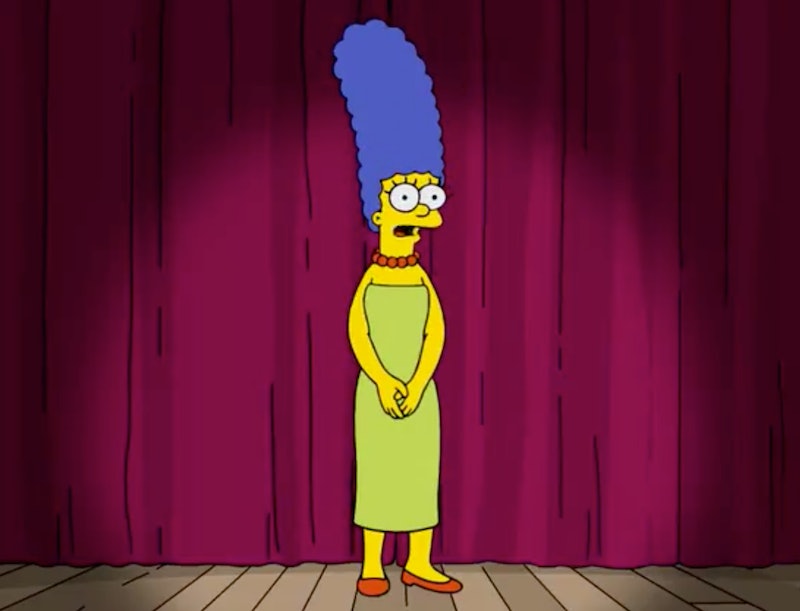 D'oh! Someone is in trouble with The Simpsons. Jenna Ellis, a senior legal adviser for the Trump administration, likened Kamala Harris to Marge Simpson after Harris made her first public appearance as Joe Biden’s vice president pick for the Democratic ballot — and Marge Simpson herself just responded to the Kamala Harris jab on Twitter. On Friday, Aug. 14, the official Twitter account for the popular animated sitcom The Simpsons shared a clip of the blue-haired matriarch addressing Ellis’ tweet that stated “Kamala sounds like Marge Simpson.”

“I usually don’t get into politics, but the president’s senior adviser Jenna Ellis just said Kamala Harris sounds like me?” Marge says in her signature raspy drawl in the clip, simply captioned, “Marge Simpson has something to say." She then cited her daughter, Lisa Simpson, and said, “Lisa said she doesn’t mean it as a compliment."

"If that’s so, as an ordinary suburban housewife, I am starting to feel a little disrespected. I teach my children not to name call, Jenna," she added, in a not-so-subtle reference to a tweet from Donald Trump that insisted suburban housewives would vote for his re-election. “I was going to say I am pissed off, but I am afraid they would bleep it.”

Ellis, for her part, caught wind of Marge's response. She retweeted the Simpsons clip and wrote, “Marge is probably going to vote Democrat... by mail.” The quip comes a day after Trump seemingly admitted on Fox News that he opposed much-needed funding for the United States Postal Service because he didn’t want to see it utilized for mail-in voting in November.

Biden announced Harris as his vice president pick on Aug. 11. A former contender for the Democratic presidential nomination, Harris will be the first Black woman nominated for a national office by a major political party. While it’s unclear if The Simpsons could have predicted this historical turn, the animated sitcom’s track record for predicting the future has been astute (a little too astute!) so far. The Simpsons famously predicted a Trump presidency in Season 11, Episode 17, “Bart to the Future” back in 2000 — 16 years before Trump gripped the presidency. It’s mentioned in a fast forward scene that Lisa succeeded Trump in the White House. “We have inherited quite a budget crunch from President Trump,” she says in the episode, before declaring that the country is broke.

Welp, if The Simpsons’ track record for predictions is any indication, Lisa Simpson could swoop in at any moment. Until then, Marge Simpson has spoken.

More like this
Watch Benedict Cumberbatch Lead An ‘SNL’ Medieval History Lesson On Roe v. Wade
By Grace Wehniainen
Cardi B Explains To David Letterman Why She Uses Her Star Power For Politics
By Jake Viswanath
What Is Barack Obama’s Net Worth? He Makes *Way* More Now As An Ex-President
By Hugh McIntyre
'Derry Girls' Fans May Have An Exciting Spin-Off To Look Forward To
By Olivia-Anne Cleary
Get Even More From Bustle — Sign Up For The Newsletter