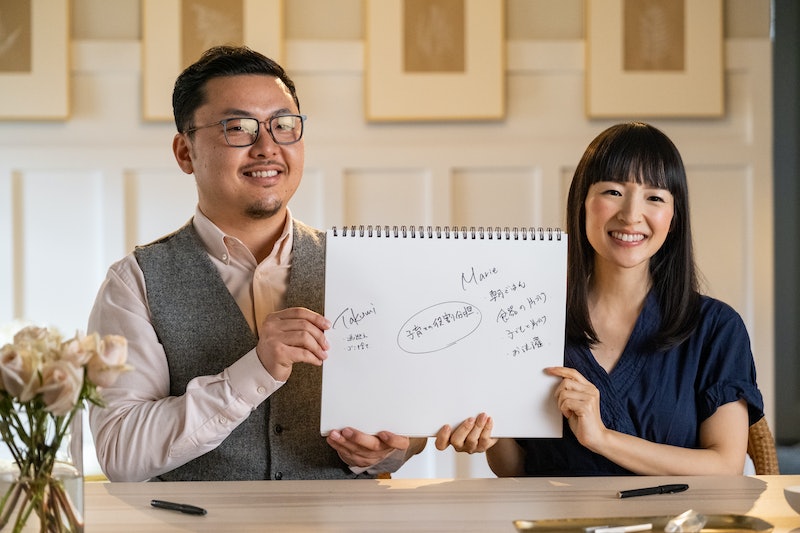 Well, this sparks joy. Organizational expert Marie Kondo randomly met her future husband, Takumi Kawahara, for the first time while they were waiting for an elevator. It’s a meet-cute story that feels like it was ripped from the pages of a romance novel. Kondo and Kawahara, who were both 21 at the time, were waiting for an elevator at a speaking event in Tokyo when an accessory he was wearing caught Kondo’s eye — a small pin emblazoned with “dream” pinned to his suit. “When I saw that, I thought, ‘What a passionate person,’” she told Fast Company in 2020.

As they waited for the elevator doors to open, the two ended up clicking and Kondo gave him one of her business cards to keep in touch. They became close, and after Kondo’s bestselling book The Life-Changing Magic of Tidying Up had been released in Japan in 2010, they incorporated their passions for business and organization together to share Kondo’s message of “sparking joy” through tidying with the world. Since then, the unstoppable team has released multiple novels, a lifestyle brand and shop, an online tidying course, and Netflix’s hit show Tidying Up and its follow-up series, Sparking Joy, which he appears in and executive produced alongside Kondo.

They are a perfect example of “opposites attract” as Kawahara is known for his bubbly, extroverted personality, while Kondo much prefers the quiet comforts of home. “Even though Takumi’s more extroverted and I’m much more introspective, we’re the same on the inside,” Kondo said. “I have to be a public figure so I can spread this message. But it’s much harder for me than for people who naturally excel at being in front of a lot of people. Takumi has really helped me.”

Here’s everything you need to know about Kondo and Kawahara’s love story.

When Did Marie And Takumi Get Married?

According to Kawahara’s LinkedIn profile, he and Kondo were married in 2013. At the time, Kawahara was unable to afford an engagement ring, so he proposed to Kondo using a special family heirloom: her beloved grandmother’s engagement ring, which Kondo had received after her death. “When Takumi, my husband, proposed to me, he didn’t have the money to buy me a ring,” she wrote in a blog post. “I told him ‘I don’t need a ring! You can give me this ring instead.’”

They Use A Spreadsheet To Split Duties

Shortly after they wed, the couple used a Google spreadsheet to equally divide up their responsibilities as a couple when it came to maintaining their home. “We have a very clear division of labor at home,” Kondo told The Cut in 2018. “My husband is in charge of the cooking and I’m in charge of the cleaning.” She called the approach “very systematic” and revealed that they send messages thanking each other for completing something off their list.

“By doing this, we got a very clear sense of what needed to be done,” she added. It’s a practice that Kondo and Kawahara continue to use and now have “a good rhythm in place” when it comes to understanding and completing their daily agendas. In addition to their shared list, they also utilize a shared calendar where they can see each other’s schedules and navigate meetings, creating grocery lists, and other day-to-day operations.

What Is Takumi’s Job Title?

As the KonMari Method began to gather steam around the globe, Kawahara left his job in sales support and marketing in Japan to become his wife’s full-time manager. Together, in 2015, they founded KonMari Media with Kawahara as its acting CEO. According to Kawahara, the couple can be found “always talking about work” even during out of office hours at home. Similarly to how they’ve divided up duties around the house, the couple has clearly identified each other’s strengths and used them to their advantage to achieve greatness in their careers, too. “She was an author who was very good at transmitting a message to the world,” he told Fast Company. “I was good at creating businesses and establishing networks.” It’s a recipe for success, and one that’s bolstered by the couple’s strong work ethics and desire to make the world a happier, tidier place.

How Many Kids Do Marie And Takumi Have?

Kondo and Kawahara have three children together: eldest daughter Satsuki, daughter Miko, and a new baby boy who was born in April 2021. In January, Kondo announced her pregnancy on Instagram by posting an image of herself smiling while cradling her growing stomach. “Another bundle of joy on the way,” she wrote.

On April 22, Kondo posted on Instagram again to share the first image of her newborn son with the world. “It’s a boy! I am over the moon welcoming this bundle of joy into our family. We are all doing well,” she wrote. “Now comes the fun part — spending this special time with our little guy.”

Children are notoriously known for being more than a little bit messy. That battle to keep the house clean and take care of her first child simultaneously was a struggle that Kondo personally faced and had to overcome. “Just after my older daughter was born, I felt unable to forgive myself for not being able to manage my life as I had before,” she wrote on her blog. “But, with time, I eased up on myself; then, after I gave birth to my second daughter, I let go of my need for perfection altogether — even when it came to tidying!”

In fact, having children changed Kondo’s entire perspective on the idea of being perfect and allowed her to be “kinder and gentler” to herself when it came to making mistakes. “Before becoming a mom, I would feel defeated when I made mistakes — I could be quite hard on myself,” she added. “Now I imagine one of my daughters feeling deflated after trying something challenging, and I tell myself the same things I would tell her.”

To Kawahara, parenting has given him “the gift of being continuously surprised.” That includes his children speaking to him in a mixture of both Japanese and English, which they are learning at the same time. “It can be surprising sometimes. They use phrases that would be considered disrespectful in Japan like ‘You’re silly, dad!’ that are actually signs of affection in English,” he said in a Q&A. “One of my daughters likes to shorten certain Japanese phrases and incorporate them into her English sentences — I know I’m biased, but I think that’s pretty clever.”

More like this
Who Is Nick Cannon Dating & How Many Kids Does He Have?
By Jordyn Tilchen and Radhika Menon
Gigi Hadid’s Dad Shared What He Knows About Those Leonardo DiCaprio Rumors
By Brad Witter
Hailey Bieber Just Responded To *That* Viral Met Gala Moment
By Radhika Menon and Sam Ramsden
Adam Devine Hilariously Let Everyone Know He’s *Not* Accused Cheater Adam Levine
By Brad Witter
Get Even More From Bustle — Sign Up For The Newsletter