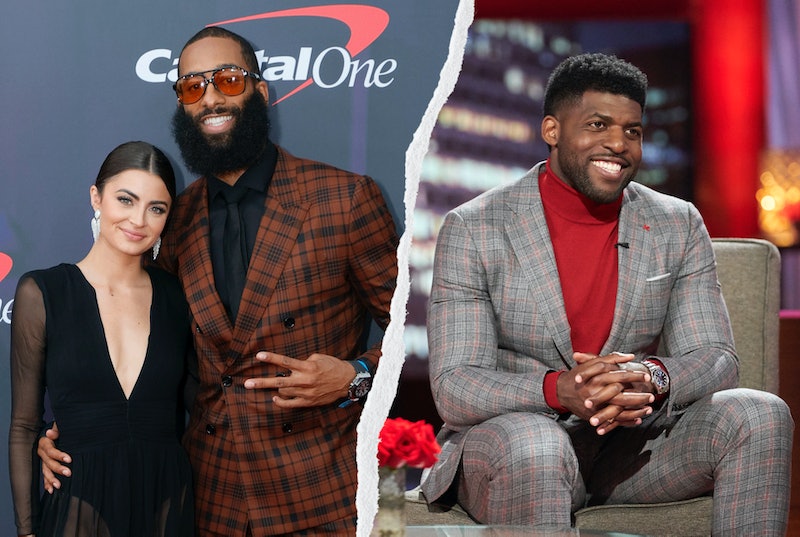 The last time Emmanuel Acho, Matt James, and Rachael Kirkconnell were together was during The Bachelor Season 25’s “After the Final Rose” special in March, and things were (understandably) pretty tense. The Uncomfortable Conversations with a Black Man author had asked Kirkconnell to publicly answer for her racist past, and the contentious Bachelor couple revealed they were no longer in a relationship at all.

But, of course, a lot can change in eight months — James and Kirkconnell are back together, for starters, and the former Bachelor recently completed a valiant run on Dancing With the Stars. Another big development post-Bachelor? Acho and the happy couple are apparently super close now. The trio reunited at Madison Square Garden for a UFC fight Nov. 6 and commemorated the moment on Instagram.

“Nothing made me happier than seeing @mattjames919 & @rachaelkirkconnell together last night,” Acho captioned his post. “I haven’t seen these 2 since we walked off the @bachelorabc stage nearly 250 days ago. We’ve cried together and we’ve laughed together, but it was all smiles this time around! Mi familia.”

James also shared the photos (which included sweet shots of the group laughing together), to which Acho commented, “We’re family now!”

It’s not the first time Acho has supported James and Kirkconnell since he first met them on “After the Final Rose.” Following the couple’s reconciliation this summer, Acho revealed on Off the Vine with Kaitlyn Bristowe that he was “beyond thrilled” for the couple. He noted that their love for each other off-camera was evident, even amid the breakup. “What people did not see is after the camera cut, they left arm over arm. ... There was still so much affection,” the former linebacker said in July.

The couple’s breakup, though short-lived, and the scandal that led to it were the major scandal of The Bachelor Season 25. Fans called Kirkconnell out for having liked problematic social media posts and for old photos of her at an antebellum plantation-themed party and in a Native American costume. (She later apologized multiple times, adding on “Unscripted Live” that she “needed to be held accountable.”) Meanwhile, Acho was brought into the fray for the “After the Final Rose” special after longtime Bachelor franchise host Chris Harrison stepped aside in the wake of his much-criticized defense of Kirkconnell.

After everything, the sweet reunion on Nov. 6 was, for James, part of a fun-filled weekend of NYC marathon prep, which included carb-loading cookies and milk and waking up early post-fight night to run the race with fellow Bachelor Nation alum Tyler Cameron. James “really contemplated not getting outta bed,” he wrote, but it looks like the former Bachelor made it out OK anyway.