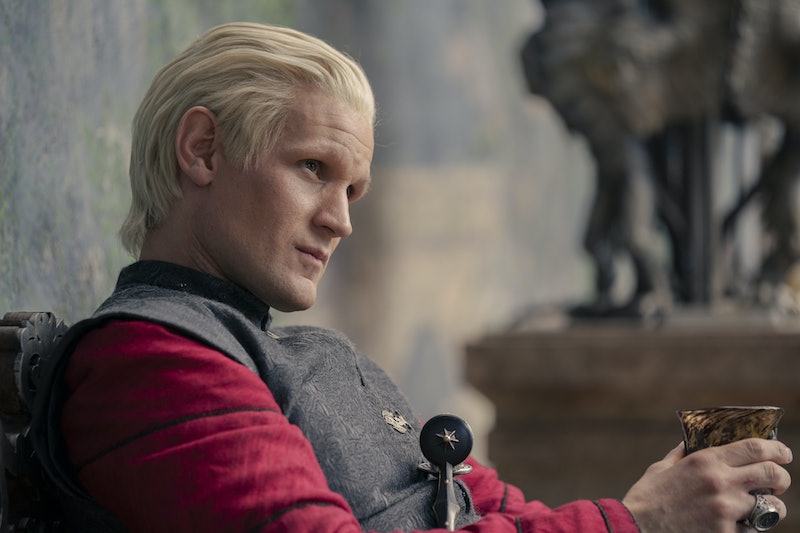 Matt Smith’s performance in House of the Dragon as Daemon Targaryen has endeared him to many fans as the problematic favorite of the Game of Thrones prequel series. As Rhaenyra’s uncle/husband/baby daddy, many fans lauded his performance — and thirsted for him. Now, in a behind-the-scenes video shared on Nov. 27 by co-star Leo Ashton, who portrays Aemond, Smith is seen showcasing a softer and more compassionate side unlike the character he plays.

In the clip, Smith hugs and chats with younger cast members about what episodes they will be returning for. “Matt Smith is very very nice you know,” Ashton tweeted alongside the video. “He went out of his way to come and say bye...this vid is funny cos I’m clearly a bit in awe as I don’t speak.” Ashton also shared that he had lost a family member before this clip was filmed, which made his interaction with Smith even more meaningful. “Also we got the boat with him and he was really nice to me cos my great grandma had just died and he was so sad for me and it made mum cry that he understood grief.” The Daily Mail reported that Smith had lost his father while filming the HBO series in 2021, which left him “devastated.”

“Well listen, well done, kids,” Smith says toward the end of the short Twitter video, adding that “it wouldn’t be the same” without them. It isn’t clear what episode was filmed when this sweet moment was captured, but likely that it’s for the season’s second half after the first time jump.

Twitter collectively swooned over Daddy Daemon, and now we’re all crying in High Valyrian. “He meant it when he called himself daddy daemon,” the “out of context house of the dragon” Twitter account (@oochotd) wrote alongside the video. “this is the man ppl were trying to villanize the other day for signing ‘uncle daddy daemon’ in an autograph session for his hotd fans and for talking positively about the canonical marriage he plays on screen” @roguesdelights tweeted.

“Wait no this is actually so sweet gosh darn it that’s actually very nice of Matt” another person chimed in.

Smith previously told Esquire that he’d love to be a father IRL. “I do think that’s what life is all about in the end. Children. Making a family. You know, when you’re dead, and you’re on the slab, that’s what’ll count,” he said in August 2022.

In the meantime, we’ll be drawing up papers so Daemon can adopt us.

More like this
'GoT' Star Emilia Clarke Says She "Just Can't" Watch 'House Of The Dragon'
By Brad Witter
15 Photos Of 'The Last Of Us' Star Pedro Pascal That Cement His Zaddy Status
By Radhika Menon
Michael B. Jordan Tackled His "Public Breakup" With Lori Harvey On 'SNL'
By Brad Witter
Here’s Everything Coming To & Leaving Netflix In February
By Jake Viswanath
Get Even More From Bustle — Sign Up For The Newsletter
From hair trends to relationship advice, our daily newsletter has everything you need to sound like a person who’s on TikTok, even if you aren’t.