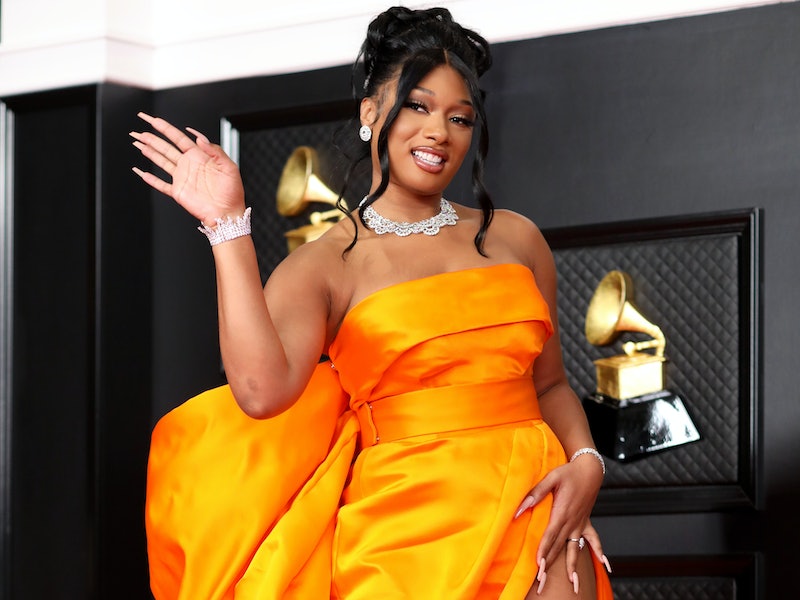 We might be approaching the end of July, but Hot Girl Summer is just getting started. On July 19, Megan Thee Stallion was revealed as one of Sports Illustrated’s three cover stars for their annual swimsuit issue. The “Savage” singer is making history as the first rapper to ever grace the cover of the highly coveted magazine, and she took to Instagram early Monday morning to celebrate.

“REAL SPORTS ILLUSTRATED SWIMSUIT EDITION COVER MODEL SH*T!!!” the “Body” rapper wrote alongside the iconic cover, which shows her stepping out of the ocean in a strappy beige bikini. “Thee first female rapper on the cover of @si_swimsuit. I want to thank all the strong women in my life who inspired me to love my body and live my best hot girl life. It means the world to me to be on this cover DREAM COME TRUE!!”

Immediately following the announcement, Megan’s fans and followers flooded her Instagram to share in her excitement. “This is what we NEEDED,” @tanayedubs wrote. “Real bodies win,” Instagram user @chanelkissa added. Several other people filled the comments section with a mixed bag of congratulatory and thirsty messages for the rap star. “Imagine being this bad,” one fan wrote. “It’s too early to be taking my breath,” someone else commented.

Sports Illustrated celebrated Megans’s cover on their Instagram account as well. “Introducing one of our Sports Illustrated Swimsuit Cover Models, Megan Thee Stallion,” they wrote. “She’s not just at the top of the rap charts, but she’s focused on finishing her degree and showing the world her unfiltered and authentic self.” They also revealed their two other cover stars: tennis champion Naomi Osaka and transgender model Leyna Bloom.

Megan’s Sports Illustrated cover is just one more history-making moment to add to her rapidly growing list. “WAP” featuring Nicki Minaj, for example, earned the most streams for a song in its first week. According to Billboard, Megan was also the first woman to lead the rap songwriter’s chart and the first woman to have three No. 1 streaming songs in the same year thanks to “WAP,” “Savage, and “Body.” Earlier this year, she also took home three Grammys for Best New Artist, Best Rap Song, and Best Rap Performance.

In February, the “Body” artist reflected on her massive success in an interview with Harper’s Bazaar. “I feel like when it’s all said and done, when people want to talk about female rap … they are definitely going to have to put my name up there with the OGs,” she said. But how many of the OGs became the first female rapper on the cover of Sports Illustrated? Just one — and her name is Megan Thee Stallion.