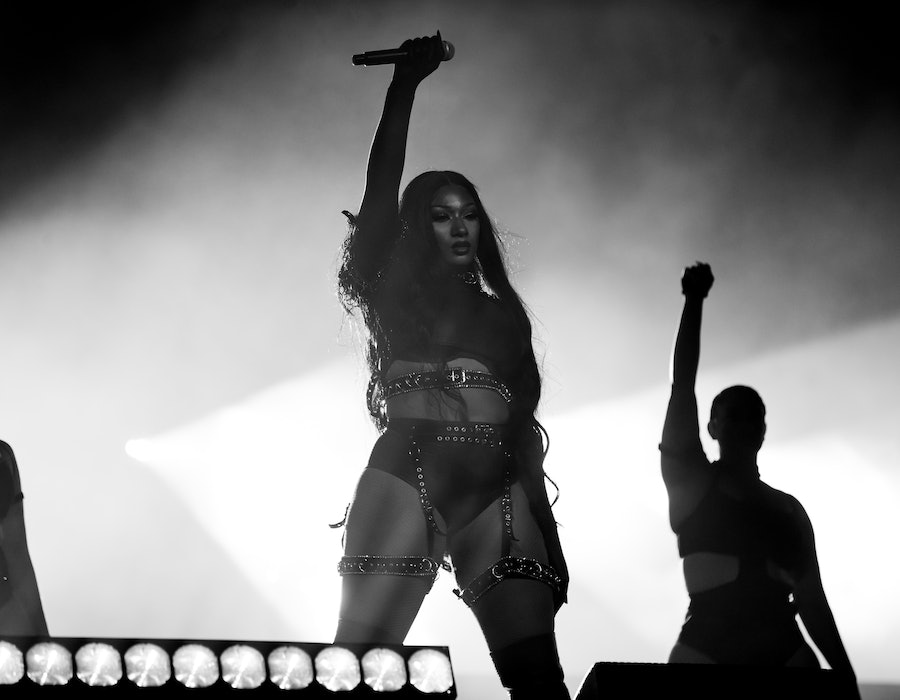 Today will henceforth be known as the day Megan Thee Stallion destroyed Tory Lanez in under three minutes — with the rest of her new album, Good News, to spare. On the heels of Lanez pleading not guilty to felony assault charges in the July shooting that wounded both her feet, Megan opens her debut studio album with a track featuring a sample of Biggie Smalls' "Who Shot Ya." "Shots Fired" is Megan's side of how the months since the shooting unfolded, and she doesn't hold back, reminding someone — presumably Lanez — that she easily could have given his name to the police instead of remaining quiet at the time: "Should've let them lock your ass up."

Naturally, the song is polarizing the internet, clearly drawing a line between Megan's hotties and Lanez' apologists. But while Twitter's response to "Shots Fired" further emphasized who the Houston rapper's supporters are, it's the song that follows that demands a closer listen. On "Circles," Megan steps back, sets aside her Hot Girl shield, and finally shows her vulnerable side.

"Circles" starts with a "F*ck that n*gga" for good measure before announcing that this song is for every hottie who's been done wrong. In what appears to be a reference to how she called Lanez "genuinely crazy" on Twitter in October for claiming he still views her as a friend, Megan raps, "Crazy-ass n*ggas need to come with a warnin.'" She goes on to reveal that she's still carrying the weight of the extreme lows she experienced the past few years amid her meteoric rise to fame, from losing her mother in March 2019, to the fallout of the July 2020 shooting allegedly involving Lanez, and how she had to go so far as to show her gunshot wounds for people to believe her and understand how unprotected Black women are:

"Bullet wounds, backstabs, mama died, still sad / At war with myself, in my head, b*tch, it's Baghdad (Yeah) / New n*gga tryna come around and play clean (Hmm) / And my clothes fit tight, but my heart need a seamstress (Ah)."

But make no mistake: Though Megan reveals that she can't be strong all the time (as nobody can), she doesn't want to dwell on those feelings. "Look, I ain't in my feelings with it," she continues in the refrain, slowly calibrating herself for the return of Hot Girl Meg. "Turn around, poke it out, bitch, get it, get it (Get it, get it) / Turn up on 'em, make 'em kill the noise / We ain't goin' back and forth with the lil' boys." She likely knows her real strength lies in her infectious positivity and gleeful embrace of sexuality. But hearing her be vulnerable, if only for a few bars, only strengthens "Circles" and Good News on the whole. Perhaps the best news about Good News is that Megan will continue to embrace every bit of her story and grow from it, inspiring others to do the same.