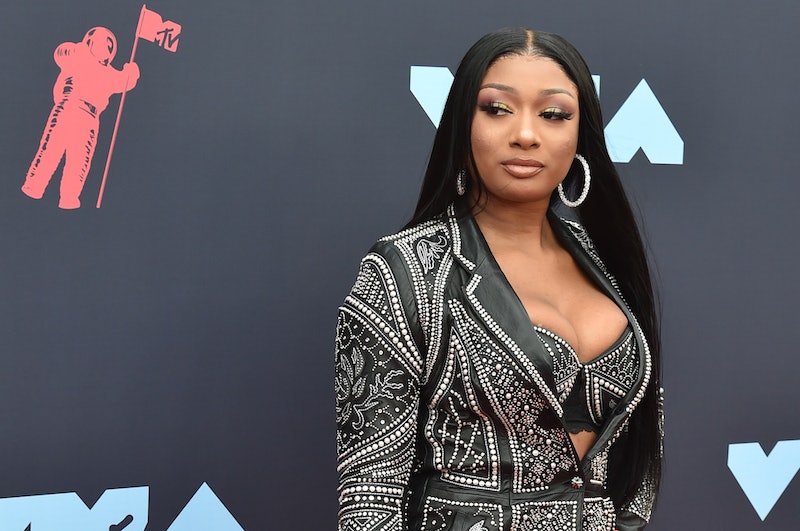 Megan Thee Stallion is setting the record straight on Good News. Four months after the rapper was allegedly shot in the foot during an incident outside of a party, the rapper dropped a Tory Lanez diss track called "Shots Fired." The song, which is the opening track on her debut album, appears to be a response to Tory's recent album, Daystar, which questioned Megan's account of the shooting and accused her of lying about the severity of her injuries.

Without naming Lanez outright, "Shots Fired" refutes his accusations and reframes the narrative to tell her side of the story. After dissing all the celebrities who supported Lanez in the months following the incident, Megan fires back at the rapper over a beat that samples "Who Shot Ya" by Biggie Smalls. "Imagine me givin' a f*ck it was your f*ckin' birthday (F*ck you) / You in your feelings, I just thought it was another Thursday," she raps, referring to opening up about her pain on July 27, which was also Tory's birthday.

In addition to reminding Lanez and the public that she never told police who shot her — "if it weren't for me, same week, you would have been indicted" — Megan also accuses the rapper of paying off one of her best friends to stay quiet about the incident. From there, she shared her side of what went down, including a response to the Daystar lyrics questioning how it's possible that her foot wasn't permanently damaged by the bullet.

"You shot a 5'10" b*tch with a .22 / Talkin' 'bout bones and tendons like them bullets wasn't pellets," the song continues. Megan also called out those who criticized her for speaking publicly about the shooting and the trauma it caused her, saying that they can't handle her "speaking truth."

"Shots Fired" comes after months of back-and-forth accusations between Megan and Lanez. Recently, Lanez pleaded not guilty to felony assault charges related to the shooting. Details about the incident were originally scarce; the pair was reportedly leaving a pool party in the Hollywood Hills when Lanez was arrested on concealed weapons charges in the early hours of July 13. At the time, TMZ reported that Megan was taken to the hospital with an injured foot, which was initially believed to be caused by stepping on broken glass. However, on July 15, Megan revealed that she was shot and had undergone surgery to have the bullet removed.

Though Lanez was connected to the shooting almost immediately, Megan didn't confirm that he was the shooter until August, explaining in an Instagram Live that the rapper and his team were lying about what went down that night. "I didn't tell the police what happened immediately right then because I didn't want to die," she explained, referring to recent incidents of police brutality against Black people. "I didn't tell the police nothing because I didn't want us to get in no more trouble than what we was already about to get in."

In October, Lanez was finally charged in relation to the shooting and could face a maximum of 22 years in prison, though he has repeatedly denied that he was the one who shot her. "Shots Fired" is the latest way that Megan has attempted to reclaim the narrative and share her side of the story. "Black women are so unprotected & we hold so many things in to protect the feelings of others w/o considering our own," she wrote on Twitter in July. Clearly, Megan isn't holding anything back anymore.

More like this
Linda Ronstadt’s “Long Long Time” Plays A Pivotal Role In The Last Of Us
By Brad Witter
Austin Butler Recalls Lisa Marie Presley Showing Him Elvis’ Bedroom
By Jake Viswanath
Jameela Jamil Defends Sam Smith After Trolls Body-Shamed Them
By Jake Viswanath
The Jonas Brothers' New Album Has A Very Meta Name
By Alyssa Lapid
Get Even More From Bustle — Sign Up For The Newsletter
From hair trends to relationship advice, our daily newsletter has everything you need to sound like a person who’s on TikTok, even if you aren’t.