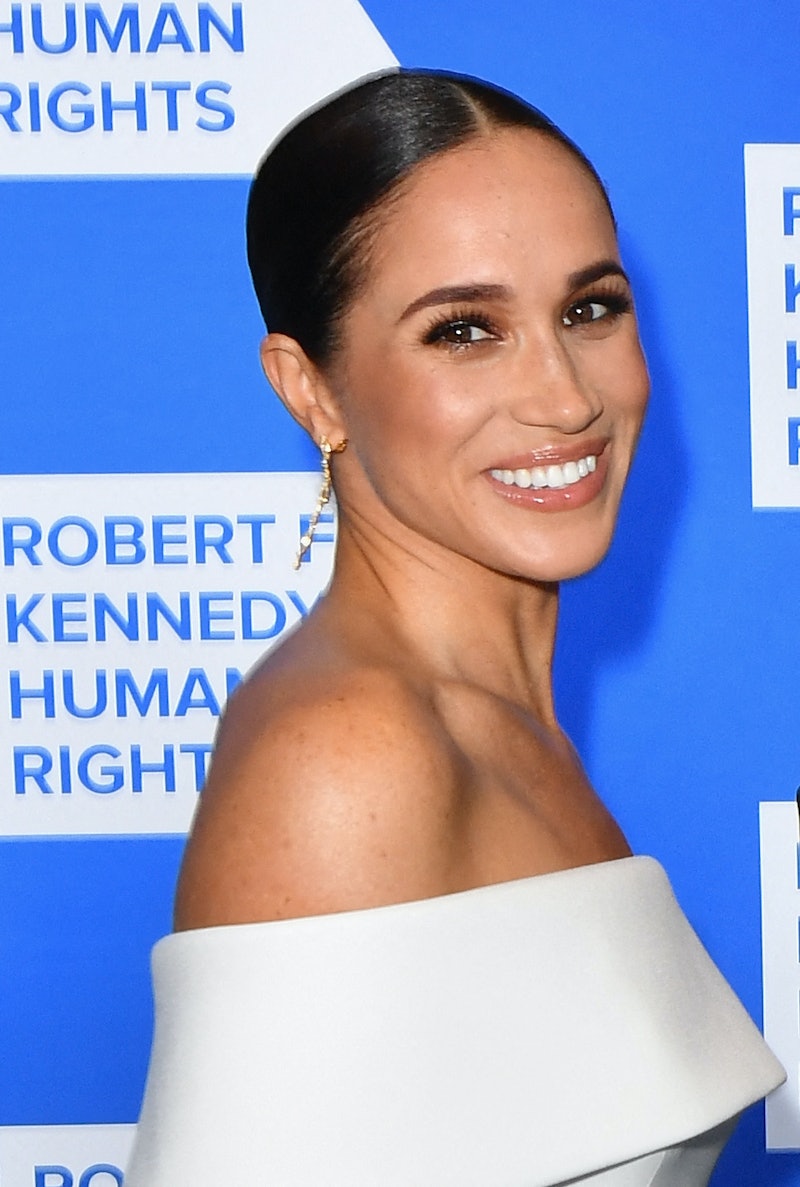 Any documentary series about Prince Harry and Meghan Markle was always going to be divisive. The Duke and Duchess of Sussex famously bucked tradition by announcing plans to step away from their roles as senior royals in January 2020, and the public has been split on them ever since. The Dec. 8 release of Harry & Meghan Volume I only fueled the debate between rival camps, especially the scene in which she reenacts her “Medieval Times” curtsy for the late Queen Elizabeth II.

Meghan and Harry were discussing her introduction to royal life when they recalled how her first meeting with the queen came about. Like in their 2021 tell-all interview with Oprah Winfrey, they noted that Meghan didn’t know the proper protocol because they hadn’t expected to cross paths with Harry’s grandmother yet. The Suits vet grinned as she described her attempt at curtsying to the queen, saying, “I mean, Americans will understand this — we have Medieval Times Dinner and Tournament; it was like that.” She even demonstrated a very exaggerated bow, chuckled a bit, and added, “Pleasure to meet you, Your Majesty,” as Harry looked on, mostly stone-faced.

To many Brits, the moment was a show of “total disrespect.” On Twitter, the aggrieved side pointed out that everyone is expected to bow to the reigning monarch in public and in private, whether or not they’re dating her grandchild. Numerous people felt Meghan was “mocking” the queen and British culture.

There was also a point of confusion over her Medieval Times reference that may have made the backlash worse. Some Meghan critics didn’t realize that she was speaking about a dinner theater experience that can be found in 10 locations in North America. Instead, they apparently assumed she was describing the royal family’s traditions as medieval.

At the same time, countless people who did get what she meant by Medieval Times came to Meghan’s defense. One supporter tweeted that “she was being theatrical and self deprecating.” They, along with many others, believed she was only mocking herself. Another person added, “It’s so sad that people are turning nothing into something. Meghan wasn’t mocking the queen when she was demonstrating her curtsy.”

Still, there was also a contingent that understood Meghan’s Medieval Times comparison and felt the moment was all the more offensive because of it. “Brits may not understand how big of a diss this is, but Medieval Times is a cheesy theatre like jousting match where you go eat turkey legs and eat with your hands,” one Twitter user wrote. Someone else didn’t like the comparison between “that kitsch dinner theater chain” and greeting a monarch.

The various factions of the Harry & Meghan debate don’t seem to have found much common ground over the curtsy, but amid it all, there was one party that didn’t seem to mind the controversy: Medieval Times itself. The brand’s official Twitter account celebrated being name-dropped in Netflix’s widely-viewed documentary with a meme showing a royal waving, adding, “POV when you find out Lady Meghan Markle mentioned Medieval Times in her docu-series.”

Harry & Meghan Volume I is now streaming, and Volume II drops on Dec. 15.

More like this
Helena Bonham Carter Doesn't Think 'The Crown' “Should Carry On"
By Sam Ramsden
Gillian Anderson's New Netflix Drama Is *Nothing* Like 'Sex Education'
By Frances Stewart
Prince Harry & Meghan Markle Are Puppets Now
By Sam Ramsden
Turns Out George Clooney Is A Huge Fan Of This Classic British Game Show
By El Hunt
Get Even More From Bustle — Sign Up For The Newsletter
From hair trends to relationship advice, our daily newsletter has everything you need to sound like a person who’s on TikTok, even if you aren’t.