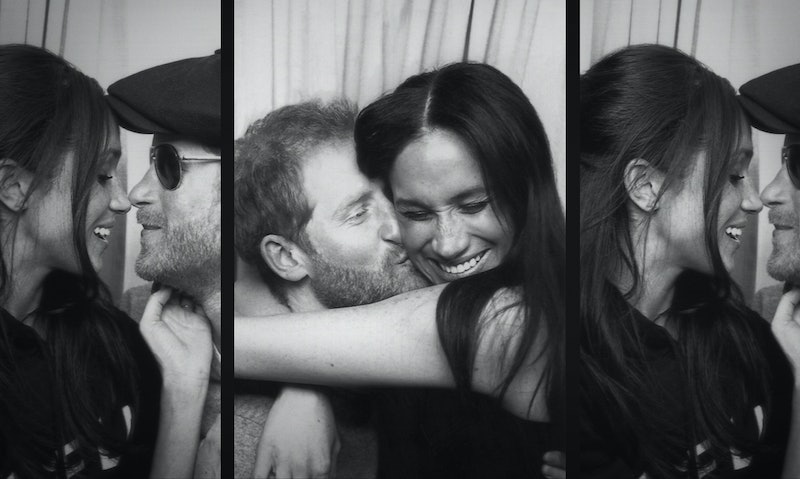 Courtesy of Prince Harry and Meghan, The Duke and Duchess of Sussex / Netflix

Meghan Markle and Prince Harry’s words are making waves — again. The Duke and Duchess of Sussex’s new Netflix docuseries Harry & Meghan, which premiered on Dec. 8, contains new bombshells about why they left the royal family behind in the UK. In it, they give a rare look into their new lives in Meghan’s home country. And every single quote they deliver comes with new context and questions behind it.

The six-episode series offers a first-person look into how Harry and Meghan fell in love and got married, solely intent on working for the royal family, before the British press and the institution caused them to leave their posts as senior working family members and plant new roots in the U.S. The couple explains what led up to their decision in great detail (yes, even more than the Oprah interview), this time supported by comments from friends and family, “most of whom have never spoken publicly before about what they witnessed,” Netflix teased.

Below, read the most impactful quotes from Harry & Meghan and the true meaning behind them.

“I've lost my dad in this, so him as my father-in-law was really important to me” — Meghan Markle

“The issue is when someone who’s marrying in, who should be a supporting act, is then stealing the limelight” — Prince Harry

The Duke of Sussex revealed that “internals at the palace were really threatened” by Meghan’s popularity.

Meghan claimed Buckingham Palace wasn’t doing enough to dispute negative headlines that were being printed about her.

Prince Harry disclosed that his father and brother did not approve of his and Meghan’s decision to move abroad.

“The truth didn’t matter, the clickbait did” — Meghan Markle

The Duchess of Sussex became emotional when discussing the impact of false stories that circulated in the press and on social media.

“That interview, it was less about setting the record straight than at least filling in the blanks” — Meghan Markle

The Duchess shed light on the intentions behind the couple’s infamous 2021 sit-down with Oprah Winfrey.

Speaking of his two children, the Duke drew comparisons to Meghan and his late mother, Princess Diana.

“There's a hierarchy of the family. You know, there's leaking, but there's also planting of stories.” — Prince Harry

Speaking in the docuseries, the Duke of Sussex sheds light on the inner workings of the royal family and their relationship with the British press.

“When the stakes are this high, doesn't it make more sense to hear our story from us?” — Meghan Markle

Reflecting on how the media and royal experts have published stories about their life, the Duchess explained that their own story is better told coming directly from them.

“There can be a temptation or an urge to marry someone who fits the mold, as opposed to somebody who you perhaps are destined to be with” — Prince Harry

During a segment on how the couple first met and the instant spark they experienced, Harry comments on the temptation, particularly the men in his family, make decisions about their partners. “The difference between making decisions with your head, or your heart. My mum certainly made most of her decisions, if not all of them from her heart. And I am my mother’s son.”

Meghan claimed the media and others felt her and Harry’s story was theirs “to exploit,” likening the couple’s 2017 engagement interview to an “orchestrated reality show.”

“So much of what Meghan is and how she is, is so similar to my mum” — Prince Harry

The Duke of Sussex drew sweet comparisons between his wife and Princess Diana, revealing that Meghan has “the same compassion, the same empathy, the same confidence. She has this warmth about her.”

Recalling her first experiences with the royal family, Meghan claimed she “didn’t realise” that hugging was “really jarring for a lot of Brits,” and it soon became clear that the monarchy’s “forward-facing way of being” carried through to their private lives. “That was surprising to me,” she added.

“She sacrificed everything she ever knew, the freedom that she had, to join me in my world” — Prince Harry

Recounting the early months of their relationship, Prince Harry shared that Meghan had left the life she once knew behind so they could be together.

Discussing their two young children, Archie and Lilibet, the couple said they understand “the role they play in this really historic family” and hope to protect them from the negative side of being part of it.

“I think they were surprised, maybe surprised that the ginger could land such a beautiful woman” — Prince Harry

Recalling the royal family’s first impressions of his wife, the Duke of Sussex claimed they “were surprised” and had “clouded” judgement of Meghan because she was an “American actress.”

“PS. when I am rich and famous and I write my life story, I will talk about you and the school, so you will be known worldwide” — Meghan Markle

The sweet message a young Meghan wrote for her school principal at the end of term, thanking her for her kindness and support, and promising to share her story.

“The direction from the Palace was don't say anything.” – Prince Harry

Speaking about the early days of their relationship and the levels of abuse Meghan was facing, Harry recounts his family’s reaction. “What people need to understand is, as far as a lot of the family were concerned, everything that she was being put through, they had been put through as well. It was almost like a rite of passage, and some of the members of the family were like ‘my wife had to go through that, so why should your girlfriend be treated any differently? Why should you get special treatment? Why should she be protected?’” Prince Harry points out that the race element is the difference.

“Some people you just can't reason with” – Ashleigh Hale

Meghan Markle’s niece, the biological daughter of Markle’s estranged half sister, Samantha, opened up about her relationship with Markle and not being able to attend Meghan and Harry’s big day because of her mother. “I think I said I was hurt on some level, but I understand where it was coming from,” Hale said. “To know that it was because of my biological mother, that this relationship that's so important to me was impacted in that way. To feel like because of her it was taken away was hard.”

“Once it has been pointed out, or identified within yourself you then need to make it right.” – Prince Harry

Referring to unconscious bias. "It is actually no one's fault,” he points out before addressing the need to make it right.

More like this
Brittany Snow Files For Divorce From Tyler Stanaland After 'Selling The OC' Drama
By Grace Wehniainen and Radhika Menon
Prince Harry Incorrectly Recites Christina Aguilera’s “Genie In A Bottle” Lyrics
By Jake Viswanath
Everything To Know About 'The Real Housewives Ultimate Girls Trip' Season 4
By Jake Viswanath
Andy Cohen Apologized To Larsa Pippen After A 'RHOM' Season 5 Reunion Dust-Up
By Brad Witter
Get Even More From Bustle — Sign Up For The Newsletter
From hair trends to relationship advice, our daily newsletter has everything you need to sound like a person who’s on TikTok, even if you aren’t.

This article was originally published on Dec. 8, 2022