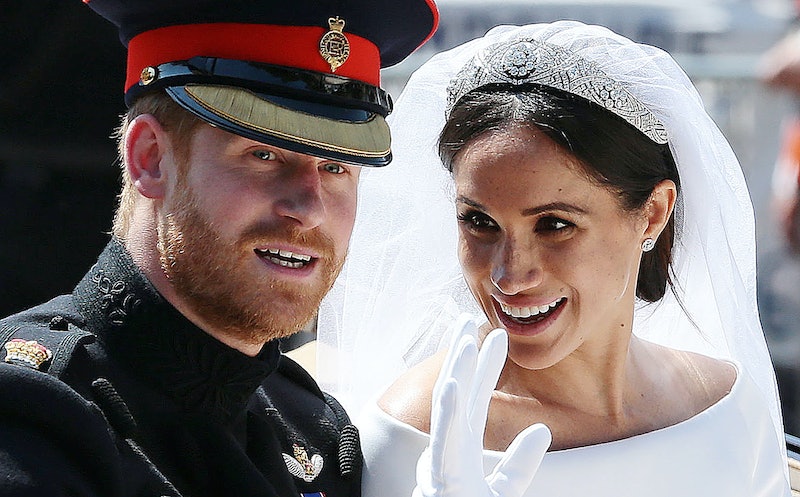 On the morning of May 19, 2018, more than 29 million people watched Prince Harry marry Meghan Markle at St. George's Chapel in Windsor Castle. But, according to the Duchess, Meghan and Harry secretly married three days before that ceremony. She casually dropped this revelation during her recent interview with Oprah Winfrey. Prior to their televised nuptials, the Sussexes were apparently married by the Archbishop of Canterbury in their backyard.

"You know, three days before our wedding, we got married," Meghan slyly revealed. "No one knows that. We called the archbishop and we just said, ‘Look ― this thing, this spectacle is for the world. But we want our union for us." Meghan also said that the marriage certificate from that secret ceremony, presumably dated May 16, 2018, hangs in the Montecito, California home she and Harry share. Of course, the Sussexes would later exchange vows in front of their families, friends, and a slew of A-list guests, including Oprah, George and Amal Clooney, and Meghan's former Suits castmates.

During the interview, Meghan also gave insight into a disagreement she had with Kate Middleton during wedding planning. Although tabloids reported that Meghan had made her sister-in-law cry during a conversation about the bridesmaid dresses, "actually the reverse happened," Meghan revealed. "There wasn't a confrontation, and I don't think it's fair to her to get into the details of that because she'd apologized, and I'd forgiven her," she continued, adding that Kate also bought her flowers. "What's hard to get over is to get blamed over something I didn't do, and that actually happened to me."

The Duchess of Sussex also described the fallout from her conflict with Kate as a "turning point" when Buckingham Palace didn't refute or correct details of the story. "I'm not saying it to be disparaging to her... I would have hoped that she would have wanted that corrected... She's a good person," Meghan added.

More like this
Meghan & Harry Respond To Jeremy Clarkson’s "Apology" Over *That* Column
By Sophie McEvoy
Kate Middleton Makes Rare Comment About Talking Therapy
By Sam Ramsden
5 Striking Parallels Between Princess Diana & Prince Harry’s TV Interviews
By Catharina Cheung
I Read Prince Harry's 'Spare' So You Don’t Have To: 11 Highlights To Know
By Marina Watts
Get Even More From Bustle — Sign Up For The Newsletter
From hair trends to relationship advice, our daily newsletter has everything you need to sound like a person who’s on TikTok, even if you aren’t.