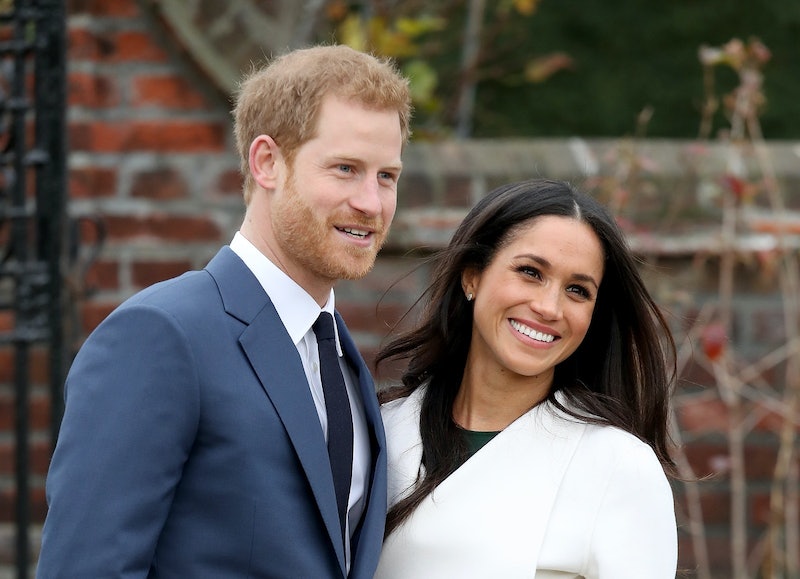 Meghan Markle, the Duchess of Sussex and her father were estranged before her 2018 wedding to Prince Harry, but she reportedly still hoped that he would show up for her big day. Unfortunately, according to the new book Finding Freedom by Omid Scobie and Carolyn Durand, Meghan was "humiliated" that her father Thomas Markle didn't attend her wedding to Prince Harry. And she was reportedly hurt that he backed out of walking her down the aisle.

According to the book, though Meghan was upset that her father was speaking with tabloids and staging photo ops ahead of her wedding, she still made arrangements to fly him to London so that he could be there for her wedding day. "As much as she was hurt and humiliated, she wanted him to be there and was willing to move on," a close friend of Meghan claimed in the book, according to Us Magazine. (Meghan and Harry did not contribute to Finding Freedom, though the authors interviewed many of the couple's close friends, as well as palace sources.) "Plus, she was worried about him; she honestly wasn’t sure if he was actually okay. His behavior was bizarre."

Unfortunately, just two days before the wedding, Thomas Markle gave an interview to TMZ, where he claimed that he decided not to attend Meghan and Harry's wedding in order to avoid causing his daughter any further "embarrassment." The former lighting designer also underwent surgery after having a heart attack the week before the wedding, although it's unclear whether his health or the negative press attention played a bigger role in his decision not to walk Meghan down the aisle.

On May 17, 2018, Meghan released a statement confirming that her father would not attend the wedding through Kensington Palace. (Prince Charles ultimately walked Meghan down the aisle on the big day.) "Sadly, my father will not be attending our wedding," Meghan wrote in the statement. "I have always cared for my father and hope he can be given the space he needs to focus on his health. I would like to thank everyone who has offered generous messages of support. Please know how much Harry and I look forward to sharing our special day with you on Saturday."

Despite the disappointment, Finding Freedom claims that Meghan blamed herself for a lot of the press attention that her father was dealing with in the weeks leading up to the wedding. "Meghan placed some of the blame on herself. Having spent the past year and a half in the glaring spotlight, she understood what the pressure from the media was like," the book reports, per Town & Country, with Meghan reportedly stating that he was "baited" by reporters to speak with them. "Harry also blamed the media for the whole situation. 'The pressure he was put under for six months before he finally cracked and started to participate,' a senior courtier said of Meghan’s father, 'that’s what Harry’s angry about.'"

Meghan also reportedly attempted to talk to Thomas the night before the wedding, but never got an answer. "The night before the wedding, she sent her father one last text. He did not reply," according to Finding Freedom. "Sitting in a bath later that night, FaceTiming with a friend, the bride-to-be said she had left her dad a final message, adding: 'I can’t sit up all night just pressing send.'"

Ultimately, Meghan became so estranged from her father that they reportedly weren't even in contact when she and Harry welcomed son Archie in May 2019. According to the book, after she gave birth, Meghan asked her mother, Doria Ragland, to text Thomas and let him know that his grandson had been born, before the news broke for the rest of the world. However, Meghan "didn’t want to know whether her father replied to her mother’s text," and preferred to instead spend the first few hours of Archie's life focused on her baby boy.