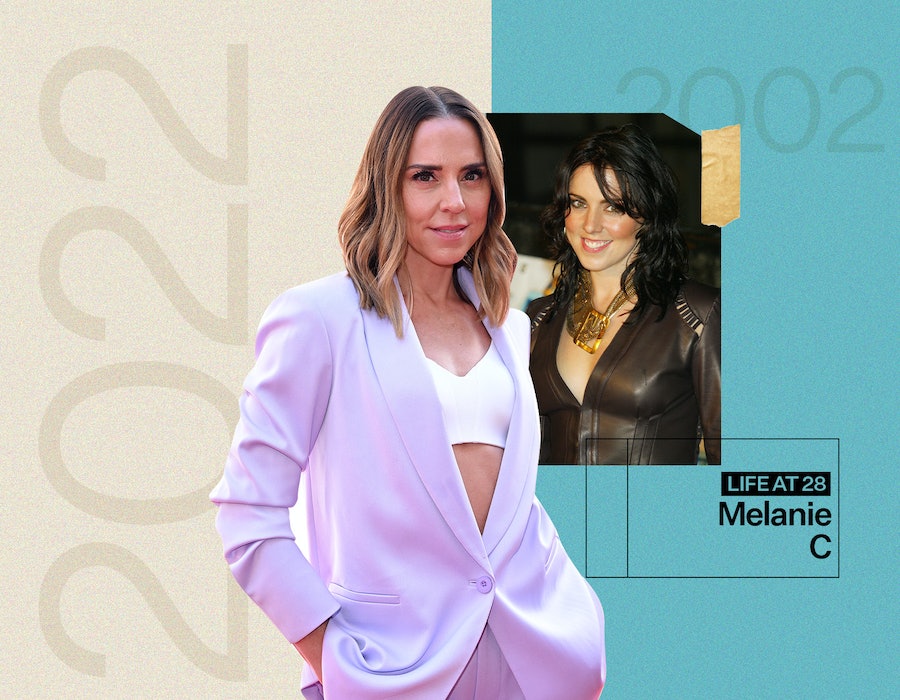 The first thing I notice about Melanie Chisholm when she joins our Zoom call is that she’s wearing a “Spice” jumper. I silently curse myself for not digging out my own Spice Girls gear for the occasion. “I thought it would be quite cute for today,” Chisholm says, as she settles down in front of the camera from her hotel room in New York City. The singer is on the promotional trail for her new memoir, The Sporty One: My Life As A Spice Girl, 26 years after the girl band burst onto the music scene with their hit song “Wannabe.”

Coming from a working class community in Liverpool, Chisholm’s life in the Spice Girls was drastically different to what she was used to. There was money, fame, and opportunity. Although she was living out her dreams, she was also struggling behind closed doors. The singer was battling with a debilitating eating disorder, and her insecurities were magnified by the unrelenting spotlight of the tabloid press and taunting labels like “Single Spice” and “Beefy Spice.” The narrative and expectations placed upon women, specifically, are so damaging and high-pressured, I note. “Yeah, because men can do what the f*ck they want, when they want, basically,” the singer laughs, dryly.

The process of writing her book (which she involved her bandmates in) was not a simple one. “I was very anxious. I felt vulnerable and exposed,” she says of sharing her story with the world. “But I have to say, the response has been incredible. I’m relieved.” Chisholm bravely opens up — and processes on paper — about a sexual assault she was subjected to during a massage at a hotel in Istanbul in 1997, the night before a major Pepsi-sponsored Spice Girls gig. “I’m so pleased I put it in the book, because I had buried it. I didn’t have time to deal with it properly. I had to get on and do the show,” she reflects. “My biggest regret is that the person hasn’t been held accountable for what they did.”

A whirlwind six years with the Spice Girls, followed by a monumental two years as a solo artist, led Chisholm to a wonderfully transformative turning point in her life: her 28th year. “It’s a good age. It’s one of those little magical numbers. You’re establishing yourself in the world as a grown up, but you’re still in your prime,” she muses. “To anyone 28, I’d say, go out and have fun. Get away with all the naughtiness you can in your 20s!”

Chisholm celebrated her 28th birthday in January 2002 with her new love interest, Tom Starr, who she had met during a Christmas vacation to Barbados. Starr went on to be Chisholm’s partner for 10 years, and the father of her child, Scarlet, now 13.

Below, Chisholm reflects on the early stages of that formative relationship, her road to recovery, and the importance of trusting your own instincts.

I was living in my apartment in Hampstead, London. I was also spending a little time in Los Angeles, doing some writing and recording. I’d recently met Tom, too. That March, I took him to David Gest and Liza Minnelli’s wedding. [A no-turning-back way of introducing him to the showbiz world.] But nothing fazes Tom. He takes everything in his stride, which is lucky, when you find yourself in some of the ridiculous situations you do as a Spice Girl.

I’m guessing your views on love and relationships were very hopeful during that time, then?

It was my first serious, long-term adult relationship. I’d spent a lot of time alone or in relationships that didn’t really amount to much. There was probably a little bit of trepidation, but also the feeling that it was my time to be settled.

We need to be very resilient and know our own self worth, because it can quite easily be damaged.

Looking back, did you know then that the relationship was something special and different to others that had come before it?

Yeah, things started to feel different. It was a holiday romance when we met, although we knew each other through friends. We kind of picked things up when we got home. Then I had this trip to Los Angeles. I was out there writing an album, but we spoke every day. That was the moment when I thought, “Oh, actually, there’s something in this.”

You detail in your book how the press gave you a hard time when you were the only member of the Spice Girls not in a relationship. I can only imagine how difficult that was for you.

It was really hard, you know, because my self esteem was low, and it was probably the worst thing that could be written about me. I had no confidence to go out there and meet people, and have healthy relationships, because I thought about myself in a very negative way, which was compounded by what the tabloids were printing.

The Spice Girls didn’t have to deal with [social media], and I really feel for young people now, not only those in the public eye, but everyone. There’s so many influencers who look fabulous, as do their homes, and holidays. I buy into all that as well, thinking, “I wish my life was like that.” But, come on, reality check. No one’s life is perfect. We all have sh*t to deal with. We need to be very resilient and know our own self worth, because it can quite easily be damaged.

You’re raising a teenager now, but what were your views on motherhood at 28?

My career was my priority, but I always wanted to be a mum. I was lucky because within the Spice Girls, my childhood ambitions were realised quite young. But I went through a time with disordered eating, to the point where I was anorexic for a couple of years, and my period stopped. I was limiting my chances of becoming a mum. Which absolutely blows my mind now because I… I’m gonna get upset.

Without my little girl, I don’t know where I’d be. She’s been the making of me, and I jeopardised that opportunity. I know there are other ways we can have children, but I was so lucky that I was able to have a child [naturally] because I didn’t take care of my body. What I’d say to young women today is to really take care of yourself. Yes, you need to live in the moment, but you also need to consider the future, especially when it comes to your physical and emotional health.

In your 20s, you’re so resilient, providing you don’t have any underlying health conditions. Hangovers? All-nighters? You bounce back. But as you get older, everything changes. If you don’t take care of yourself, you can’t take care of anyone else.

How was your relationship with your body at 28?

By 2002, things had started to go well. I’d met Tom. I was regaining confidence in myself, my eating, and my behaviours. I was gearing up for Reason [my second album]. For me, it was a combination of everything that helped me get back on the road to recovery.

The first step came in 2000, when I sought professional help from my GP. I had to address my depression. I was taking medication at the time, but I was also doing talking therapies. I was lucky to be in a position where I could try out alternative treatments, from acupuncture to reflexology. Everyone’s different, and you have to find what works for you.

You’d already achieved major success with the Spice Girls and as a solo musician, I’m curious as to how you were feeling about your career at 28?

I was still very ambitious, but there were a few obstacles in my way. I was working on my second solo record — the difficult sophomore album. My first, Northern Star, was released in 1999. It was very successful, so I ended up promoting and touring all over the world for two years. That kept me out of the studio, meaning a bigger gap [between records] than I would have liked. I didn’t feel as inspired as I had done on my debut album, so there were a few creative wobbles around Reason [released in 2003]. There are some beautiful songs on the record, but I don’t think it’s my strongest.

And it was also the dawn of file sharing. The music industry was almost decimated by the digital age, so it was a really rocky time, and quite daunting as an artist. Not long after [in 2003], I was dropped by my record label. Then I had to completely rethink everything.

For a few years, I was a bit anti-Sporty, which now makes me shudder, because I love being Sporty Spice and I fully embrace her.

What music were you listening to then?

I’ve always had an eclectic taste. There was great pop around then — Britney Spears. I was also enjoying Eminem and Dr. Dre. But I was mainly listening to nu metal bands like Linkin Park.

What was your personal style back then, and did you feel liberated fashion-wise after the Spice Girls disbanded?

For a few years, I was a bit anti-Sporty, which now makes me shudder, because I love being Sporty Spice and I fully embrace her. But back then, there was a little bit of: “No, I’m not just Sporty Spice, I’m Melanie C!”

I did want to rebel — to look different and be different — as I wanted people to see there was another side to me. There were some very dodgy outfit choices… low-rise boot cut jeans and a lot of crop tops. But I was still in trainers: my [Adidas] Shell Toe Superstars.

You say “dodgy,” but that’s exactly the look people are going for now. People are selling their old Jane Norman clothes online. I’m fuming I threw mine away.

My daughter’s buying them! She doesn’t buy new clothes anymore. Everything’s from Vinted or Depop.

Lastly, if you could go back and revisit your 28-year-old self, what advice would you give her?

Trust yourself. It’s taken me a long time, and I still battle with it. If something doesn’t feel right for you, then it probably isn’t. I’ve silenced myself too many times to keep the peace. I wish I’d spoken up more.