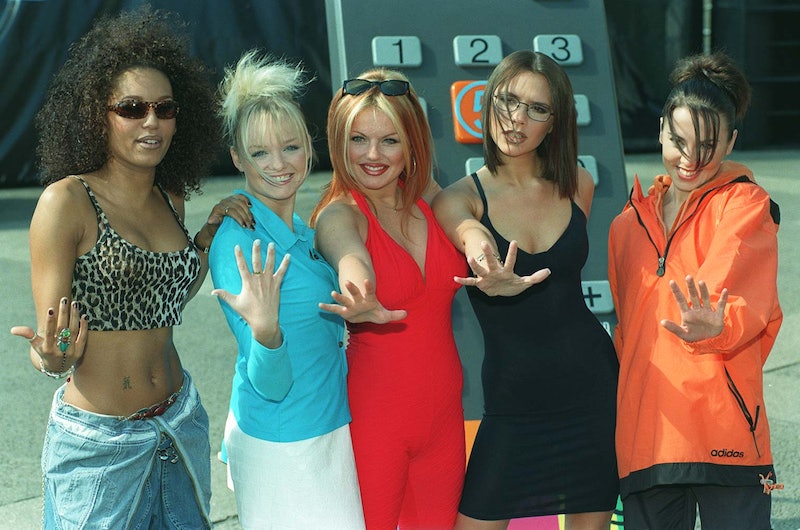 When the Spice Girls released their debut single “Wannabe” in 1996, the landscape of pop culture, the trajectory of female vocal groups, and the music industry changed forever. The five members — Mel B, Emma Bunton, Melanie C, Geri Halliwell, and Victoria Beckham — became international superstars and wealthy beyond their wildest imaginations. More than two decades after they went their separate ways, they are still regarded by many fans and critics as the most commercially successful girl group of all time. All five women are still working non-stop individually, finding success in fashion, theater, TV, publishing, radio, and music.

Now, two of them are playing catfishes in Season 4 of Netflix’s hit reality series The Circle. Former Baby Spice (Emma) and former Scary Spice (Mel B) are the first celebrities to step into The Circle (players have catfished as celebs in previous seasons), and the two stars likely earned significant Netflix paychecks for their appearances. Notably, Emma and Mel B can not win any of the game’s prize money, though they can help make the cash prize increase for the eventual winner.

With two former Spice Girls members appearing on The Circle, fans of the girl band are wondering how much the group made together and how much each of them are worth today in 2022.

As a band, the Spice Girls earned incredible acclaim and wealth. While they only released three albums, they earned massive sums of money during their short tenure as the biggest vocal group in the world. The band charted 10 top 10 hits in the U.K., with nine of those reaching the summit. Their music wasn’t just popular in Europe, as they traveled the planet promoting and touring. They sold an estimated 100 million records worldwide, and in 1998, it was estimated that the Spice Girls empire may have reaped as much as $800 million.

During the peak of their fame in the late 1990s, the Spice Girls were reportedly earning $75 million per year. When they returned to tour in 2007, they were each reportedly paid $20 million to perform together in concerts around the world, including 17 soldout shows at London’s O2 Arena.

Victoria Beckham isn’t just richer than all of her former bandmates, she’s reportedly richer than all of her former bandmates combined. The former Posh Spice and her husband David Beckham have a combined net worth of $450 million, according to Celebrity Net Worth’s calculations, with both David and Victoria each contributing significantly to that sum since their marriage in 1999. Following the Spice Girls, she launched a solo career, releasing one album and scoring four top 10 singles in the U.K. But after less than half a decade, she moved on from music and pursued fashion, which she had established an interest in as Posh Spice.

After securing one-off modeling and designing projects with brands like Dolce and Gabbana, Rocawear, Marc Jacobs, and Rock & Republic, she ventured into the fashion world with her own eponymous brand. Since launching in 2008, Beckham has produced dozens of clothing lines, and the company now produces eyewear, handbags, dresses, denim, and much more. In the early years, her company was labeled a financial success, with sales predictions topping $100 million. Later, it was revealed that the firm wasn’t actually doing as well as some expected.

She has also expanded her empire into fragrance and beauty. Her first foray into cosmetics, V-Sculpt, launched in 2007. In 2019, she returned to that industry with Victoria Beckham Beauty. She has released two books, Learning to Fly and That Extra Half an Inch: Hair, Heels and Everything in Between, which both sold well in the U.K. She has starred in documentaries and docuseries that followed her as she recorded new music and created fashion businesses, but she has not spent much time acting, hosting, or judging, like her former bandmates.

In just one real estate deal, it appears the Beckhams may have made as much as $14 million after selling a Beverly Hills mansion for $33 million. They paid $18.7 million for the home years prior.

The first member to leave the Spice Girls, Geri Halliwell turned the band from a quintet to a quartet in 1998. She quickly began her solo career, and she went on to score eight top 10 hits in her native U.K., with half of those singles soaring right to No. 1. She produced three albums, with two breaking into the highest tier, while the final, 2005’s Passion, didn’t enter the top 40.

In addition to her solo musical career, which lasted less than a decade, she has released one autobiography, titled If Only, and a series of children’s books based on a character named Ugenia. All of her written works sold well, though she hasn’t continued down that path for several years. She has also released a few one-off clothing lines, made two yoga DVDs, and served as a judge on reality competition programs like Popstars: The Rivals, All American Girl, The X Factor, and Australia’s Got Talent, among others.

Baby Spice, as she was known when she was one of the Spice Girls, also embarked on a solo musical career following the dissolution of the group, and like the other members, she enjoyed a period of commercial success. On her own, she charted two top 10 albums and seven top 10 smashes before taking a break. She returned to music in 2019 after more than a decade away, and her comeback release My Happy Place nearly became her third top 10 title, peaking at No. 11.

Bunton has found work as a presenter, host, and judge on reality programs. She’s served as a recurring figure on series such as Emma, Celebrity, Strictly Come Dancing, The X Factor, Celebrity Juice, Don’t Stop Believing, Dancing on Ice, and The Great American Baking Show. She has also acted in Tim Vine Travels in Time, Murder in Successville, and Drunk History.

In 2009, Bunton parlayed her fame into a job in radio, as she began hosting a daytime program during the afternoon rush hour. She then joined Heart Breakfast host Jamie Theakston, and they anchored the show for five years. She stepped away from that to rehearse for the Spice Girls’ reunion, but returned to host a Sunday night program of her own.

Following the split of the Spice Girls, Mel C has gone on to become the most prolific solo musician of the bunch. Unlike her former colleagues, Chisholm (her real last name) has not stopped writing and recording music, and she has risen and fallen on the charts in the U.K. with her own material. She has now released eight albums, with three entering the top 10. She’s also nabbed seven top 10 singles, including a pair of No. 1s.

READ NEXT: Twitter Is Fuming Over Mel C’s Elimination On ‘DWTS’

Chisholm has appeared on TV on shows like The X Factor Australia, Superstar, Bring the Noise, Asia’s Got Talent, The Voice Kids, Celebrity Gogglebox, and Dancing with the Stars. Unlike most of her former bandmates, she has also appeared on stage as an actor, starring in the musicals Blood Brothers and Jesus Christ Superstar in the U.K.

Only Mel B’s first album Hot charted in the U.K., while her follow-up, L.A. State of Mind, didn’t make a serious commercial impact. On her own, she’s scored four top 10 hits in the country, with her first solo offering, “I Want You Back” with Missy Elliott, hitting the top of the weekly tallies.

On TV, Brown (which is sometimes shortened to B) has landed roles as a judge, mentor, host, or an actor on programs such as Dancing with the Stars (first as a contestant, then as a host), Coronation Street, Burn It, Loose Women, Dance Your Ass Off, Mel B: It’s a Scary World, The X Factor Australia, Stepping Out, America’s Got Talent, The Voice Kids: Australia, Lip Sync Battle UK, and quite a few more. Brown has seemingly devoted more of her time to television than the other Spice Girls. Brown has published two books during her career, 2002’s Catch a Fire: The Autobiography and 2018’s Brutally Honest. She has also acted on stage in well-known productions such as Rent and Chicago as well as her own Brutally Honest.

During her divorce to film producer Stephen Belafonte, reports claim that Brown had spent almost all of the money she made as a Spice Girl, perhaps as much as $50 million. In 2017, a judge ordered her to pay her ex-husband $40,000 per month. At the time, she was also earning $240,000 a month as a judge on America’s Got Talent.

More like this
The Richest 'Bling Empire' Cast Member Is...
By Hugh McIntyre
Doja Cat Needed Tonsil Surgery & Now She Can't Eat Taco Bell's Mexican Pizza
By Jake Viswanath
Britney Spears Thanks Fans After Miscarriage & Explains Why She's Writing A Book
By Jake Viswanath
Joe Alwyn Reacts To Taylor Swift Earning An NYU Doctorate In A Rare Interview
By Jake Viswanath and Nicole Pomarico
Get Even More From Bustle — Sign Up For The Newsletter