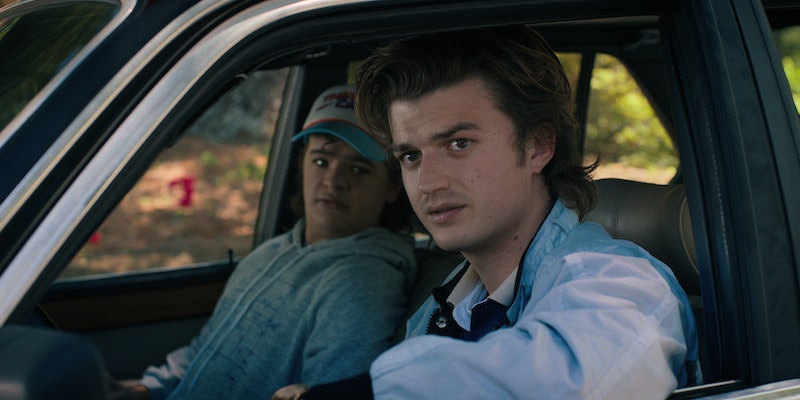 Since its 2016 debut, Stranger Things has introduced a number of iconic characters, from the psionic Eleven to the grumpy police chief Hopper. But few of the leads have built up a dedicated, avid fandom quite like Joe Keery’s Steve Harrington. Once Nancy’s pompous boyfriend and Jonathan’s high school bully, Steve has since grown into the show’s resident heartthrob-slash-dedicated babysitter.

It’s an impressive arc, considering Steve was originally supposed to be a one-note “asshole jock” who died at the end of Season 1, according to creators Matt and Ross Duffer in a making-of video. But “Steve started to change the second we cast Joe Keery because that is not how we were envisioning Steve at all,” the brothers explained. “I remember it was the scene that he auditioned with was when he breaks Jonathan’s camera. Even though he’s being just the total asshole in that scene, [Keery] was so charming that we all fell in love with him.”

Now a beloved member of the gang, Steve has faced down a Demogorgon, Demo dogs, and even brawled with Billy to protect the kids. Sure, he gets beat up every season — a running gag in the show at this point — but his repeated willingness to dive into the fray regardless has won over viewers and critics alike. Whereas before he was obsessed with his own popularity, now he gives confidence-boosting pep talks to Dustin and patiently listens when Robin comes out (and keeps her secret even when friends jab at him for not dating her). He absolutely knows he’s not the main character, yet he strives to protect everyone around him anyway — basically the closest Stranger Things has to the “himbo” boyfriend ideal. As Laura Bradley wrote for Vanity Fair, essentially he’s become the show’s “greatest triumph ... a glorified babysitter who really wants to be a hero.”

And in Stranger Things Season 4, the love for Steve has reached a fever pitch. The new season kicks off with Steve feeling bored with his job at the video rental store and struggling to get a girlfriend — a hilarious story detail considering his legion of fans in the real world.

When Vecna begins to attack and sets his sights on Max, Steve teams up with Robin, Nancy, and the kids to unravel what’s really going on. That leads them to Victor Creel’s house, and later a newly created gate at the bottom of Lover’s Lake. True to form, Steve volunteers to dive down and check it out, tossing off his shirt and kicking off even more TikTok fan edits and tweets.

He gets sucked through the portal and gets immediately swarmed by Demo bats, which led to fan worries that Stranger Things was going to kill Steve. But thankfully he survived, and he inspired even more amusing memes after he tossed around a bat and beat it into a pulp. “I know everyone had some kind of awakening when he did that,” one person commented on a TikTok edit of the scene. Another one joked, “I have never wanted to be a bat so bad.”

Even Eleven’s actor Millie Bobby Brown has added to the flames with her own support of Steve. When asked whether she’d choose Eddie or Steve, she responded, “Steve Harrington, are you kidding me?” while fanning herself. “She’s speaking for us,” someone commented on a TikTok edit of the interview.

Currently, Steve is trapped in the Upside Down with Nancy, who’s been pulled under by Vecna’s spell. But his fandom is still going strong, and many are hoping that when Part 2 drops in July, he’ll find a way to rescue her and hopefully, make it out alive once more.