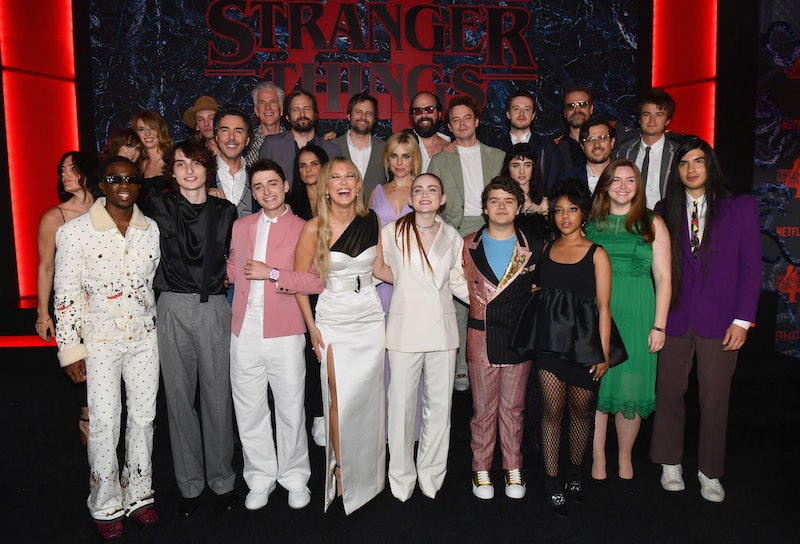 Since it debuted on Netflix in 2016, Stranger Things has become a cultural phenomenon. When Season 3 arrived in 2019, more than 40 million people tuned in within the first few days. The sci-fi horror drama, which is set in the ’80s, has been nothing short of a slam dunk for Netflix.

While Stranger Things is certainly beloved, it is also incredibly expensive to produce. Between the behind-the-scenes talent, the special effects, marketing, and a large cast whose salaries continue to climb, it’s been reported that each Season 4 episode cost Netflix roughly $30 million. Quite a bit of it goes into the pockets of the actors who make the characters come to life.

Fans will be thrilled to know that Season 5 is already in the works as Season 4 comes to a close on July 1 with Volume 2. Fansided reported that the fifth season of Stranger Things (which will explore the lore of the enigmatic Upside Down) will unfortunately be the last. The Duffer Brothers hinted that Stranger Things spinoffs are possible in the future, so this may not be the end for some beloved characters. Which means, if any of the original cast members are involved, there’s a good chance they will see an even bigger payday in the future.

READ NEXT: Season 1 vs. Season 4 Cast In Photos

Read on to learn who the richest cast members are and how much they’re worth in 2022.

The wealthiest Stranger Things cast member by far is Paul Reiser, who is known more as a comedian than someone who typically appears in serious dramas or sci-fi projects. In the ’90s, Reiser was one of the highest-paid actors on TV, as he and co-star Helen Hunt were both earning $1 million per episode on Mad About You’s final season. He has also appeared in successful movies, written several bestselling books, and even made more than $20 million on just one real estate sale, according to Celebrity Net Worth.

Twice nominated for Oscars in the ’90s, Winona Ryder dominated that decade as one of the hottest and freshest new stars in Hollywood. She built her name by appearing in films like Edward Scissorhands, Heathers, Bram Stoker’s Dracula, The Age of Innocence, Reality Bites, and Little Women. Her career tapered off for a while, and Stranger Things has been considered by many to be her big comeback. According to Deadline, Ryder’s salary jumped in Season 3 to between $300,000 and $350,000 per episode.

For the first season of Stranger Things, Millie Bobby Brown earned $10,000 per episode, according to Celebrity Net Worth. That sum climbed to $30,000 per episode for the second season. In Season 3, that figure exploded to $300,000 per episode. Brown also reportedly earned at least $6 million for her starring role in Enola Holmes. Her deal also stated that should there be a sequel (which has apparently already finished shooting), she’ll make at least $7.5 million.

Cara Buono has spent much of her career on TV, and she was already a seasoned veteran before Stranger Things. Throughout her decades on the small screen, Buono has acted in popular shows like Third Watch, The Sopranos, The Dead Zone, Person of Interest, and Mad Men, for which she earned an Emmy nomination.

Matthew Modine first rose to prominence as an actor in the 1982 classic Full Metal Jacket, and since then, he has continued to work constantly, both in films and TV shows. Some of his most high-profile recurring or main roles on TV include The New Adventures of Sherlock Holmes, The Bedford Diaries, Weeds, Proof, and now Stranger Things. In the mid-’90s, he was nominated for an Emmy for his performance in And the Band Played On.

Alongside his co-star Ryder, David Harbour enjoyed a huge pay bump when Netflix renewed Stranger Things for a third season. Both stars, who had more on their resumes than their younger counterparts, reportedly started earning between $300,000 and $350,000 per episode, according to Deadline. Before the franchise launched, Harbour had appeared in movies like Brokeback Mountain, Revolutionary Road, Quantum of Solace, and superhero flicks like Black Widow, Hellboy, and The Green Hornet. He had also scored recurring roles on TV shows such as The Newsroom, Rake, Manhattan, and State of Affairs.

Before Stranger Things, many of Finn Wolfhard’s colleagues, even those around his age, had resumes that were fuller, while he had only acted in one-off, small roles in a handful of TV shows. By Season 3 of Stranger Things, just a few years after he started in the industry, he was already earning $225,000 per episode. Once the Netflix series took off and became successful, he landed his first film franchise, and he’s now starred in two movies in the horror series It.

Years before Stranger Things premiered, Natalia Dyer had already acted in a handful of successful films and attended college. She appeared in Hannah Montana: The Movie and The Greening of Whitney Brown before moving to New York City to attend New York University. She continued acting in smaller productions, and she shifted her focus to TV for Stranger Things. The program not only helped her achieve new levels of fame and wealth (by Season 3 she was reportedly earning $100,000 or more per episode), but she met her boyfriend Charlie Heaton on set.

Like his girlfriend Dyer, Charlie Heaton is making somewhere between $100,000 and $150,000 per episode of Stranger Things, which remains the most popular title he’s appeared in. Aside from acting, Heaton was also involved in a bands back in his home country of the U.K. before he began spending more time in America for his acting career.

Similar to his colleague Heaton, Joe Keery balances acting with making music, and for years he was a member of the Chicago-based garage and psych-rock band Post Animal. With the band, he was involved in writing and recording several projects, but he worried that his fame would hurt the group. In 2019, he launched a solo musical career under the name Djo, which has been keeping him busy in between shooting Stranger Things. Like many of his co-stars who have main or recurring roles, his salary grew to $250,000 per episode in Season 3.

Before he landed the role of a lifetime in Stranger Things — for which he now takes home a quarter of a million dollars every episode — Caleb McLaughlin spent years learning his craft and acting in the theater. He began his career in an opera and then he moved on to portraying Young Simba in the stage adaptation of Disney’s The Lion King. In 2021, he transitioned into film, starring opposite Idris Elba in the Netflix production Concrete Cowboy.

Noah Schnapp began acting at a very young age, as he was only 10 when he appeared in Steven Spielberg’s Oscar-winning Bridge of Spies. He has landed other roles, but lately Schnapp has been busy creating, launching, and running his own business. In November 2021, he debuted a new snack product he calls TBH (To Be Honest), which offers a sustainable Nutella-like spread.

Just 20 years old, Sadie Sink not only has a growing career as an actor, but she has also modeled for some of the biggest clothing brands in fashion. She walked the runway in Paris Fashion Week when she was only 15, and she has posed for companies like Kate Spade, Chanel and Givenchy Beauty. On top of all that work, she has also acted in American Odyssey, two of the Film Street movies, and even Taylor Swift’s All Too Well: The Short Film.

Brett Gelman has spent much of his acting career appearing in TV comedies like Love, Family Guy, American Dad, Fleabag, Another Period, and Blunt Talk. Stranger Things helped him expand his repertoire, and his casting has likely played a role in his net worth increasing.

This article was originally published on May 30, 2022