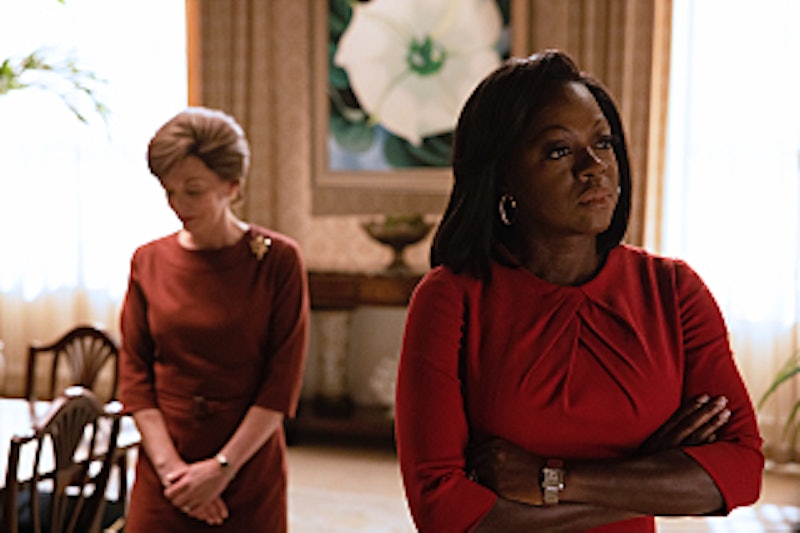 Showtime’s new series, The First Lady, follows the lives of three former White House wives: Eleanor Roosevelt, Betty Ford, and Michelle Obama. Taking on the roles of such influential and beloved women is no easy feat, but when Oscar winner Viola Davis was cast as the former first lady, it seemed like a perfect fit.

The casting got everyone — including Obama — excited. In March 2021, Obama praised the actor. “I feel that I’m not worthy,” she told Entertainment Tonight. “I wish I could be better to live up to the character that Viola has to play, but it’s exciting. Anything Viola does, she does it with passion and vigor, and I know she will do no less for this role.”

Days before the show premiered on April 17, Davis shared she was “absolutely terrified” of messing up the role. “She’s an icon. Everyone knows what she looks like and what she sounds like, so I am absolutely terrified,” the actor told Vanity Fair. “But I’m mostly terrified about what she will think. I don’t want to insult her and have her calling me. I gotta make the sister look good.” Per the outlet, she even studied Obama’s podcasts, videos, and memoir, Becoming, and consulted with the former first lady directly.

America’s first lady from 2009 to 2017 hasn’t reacted to Davis’ performance yet, but Twitter definitely has. While Obama is known for her facial expressions, viewers dragged how Davis went overboard with her impersonation by pursing her lips too often during the show’s first episode. One even predicted, “Viola Davis is SENDING me. I just know she is going to piss Michelle Obama off with this.”

A few Twitter users even likened Davis’ expressions to a familiar emoji.

Some couldn’t stop thinking about Obama’s expressions after the first episode. “I have never thought so much about Michelle Obama's facial expressions until watching Viola Davis portray Michelle Obama,” user @kalahkitching wrote.

While others just wanted to forget.

Some viewers just didn’t understand the emphasis on the pursed lips altogether.

Some even involved the former president, guessing at how he’d react to Davis’ portrayal.

Despite Davis trending on Twitter, some viewers graciously reminded our timelines that “one questionable role” does not a bad actor make. One pointed out, “love how the internet collectively went from viola davis emmy for her michelle obama portrayal to viola davis going to hell for the same.”

For those who are invested in this saga, the remaining episodes air weekly on Sundays.

More like this
Everything To Know About The 'Daisy Jones & The Six' TV Series
By Maxine Harrison and Brad Witter
Here’s Everything Coming To & Leaving Netflix In February
By Jake Viswanath
At 28, Debra Jo Rupp Was Living A Much Different '70s Show
By Grace Wehniainen
Here’s Why Danny Masterson’s Hyde Isn’t In 'That '90s Show'
By Brad Witter
Get Even More From Bustle — Sign Up For The Newsletter
From hair trends to relationship advice, our daily newsletter has everything you need to sound like a person who’s on TikTok, even if you aren’t.