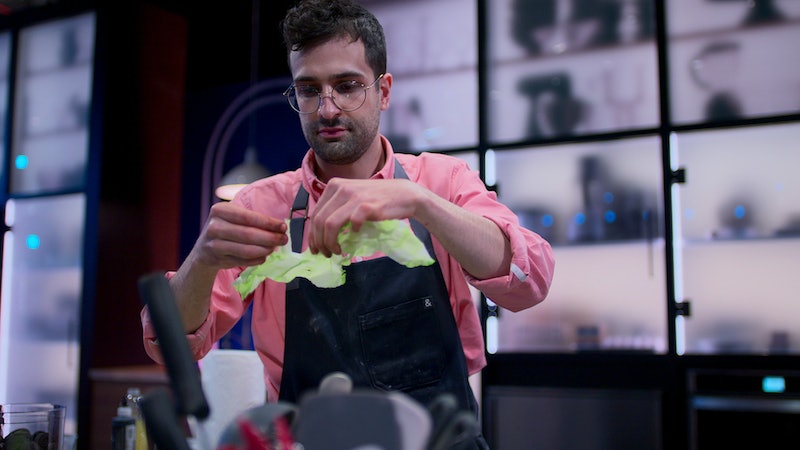 Netflix’s newest baking show is a meme personified. In the early days of the pandemic, social media was flooded with videos of inanimate objects being cut into with sharp knives, shocking us when they were revealed to be cake. Toilet paper, Crocs, and soap dispensers had all suddenly transformed, and we all lost our minds.

Is It Cake? takes the viral trend and blows it out into an entire competition show. Professional bakers from around the world compete by creating hyper-realistic cakes, and they must trick a panel of celebrity judges (including Fortune Feimster, Arturo Castro, and Rebecca Black) into believing their cake is actually the real object for a cash prize. Now that the series is out, one contestant has been attracting the most attention for his competition trickery.

Jonny Manganello, a baker and cake artist from West Hollywood, California, was accused of cheating after viewers noticed he garnished his real tacos with fake tomatoes to confuse judges about which tacos were real during the first challenge on the show. The scandal!

While most of the tweets about the controversy questioned Manganello’s morality, others pointed out that what he did was fair game. If his actions had in fact been cheating, the show would’ve stepped in, argued one fan who also cited similar behavior from other contestants. “On 5th episode Andrew also altered with plastic cups and I think Nina did something to the bowl of the 1st decoy, they are allowed to to that,” her tweet read.

Not all viewers weighed in on the controversy; others simply enjoyed Manganello’s real talk and funny quips, becoming quick fans of the young baker.

Manganello replied to the claims via an official Netflix release, stating that all contestants had to follow the rules closely and consulted with culinary producers many times during filming — an aspect of reality television that isn’t always televised. He also corroborated what some Twitter fans pointed out about other contestants. “Many, if not all, of the other bakers manipulated decoys on the show. It isn’t really discussed much, but you can see it in tons of different episodes,” Manganello said.

Manganello has also been posting entertaining reaction videos to various show segments, showing he has a sense of humor when it comes to his reality show debut.

More like this
Bachelor Nation's Blake Horstmann Is Dating 'Love Is Blind' Star Giannina Gibelli
By Jake Viswanath and Radhika Menon
Move Over, 'Sunset'! The Drama-Filled Trailer For 'Selling The OC' Is Here
By Nola Ojomu
Here’s Everything Coming To & Leaving Netflix In July
By Grace Wehniainen
Winter 'Love Island' Is Officially Coming Back & Twitter Has Thoughts
By Sam Ramsden
Get Even More From Bustle — Sign Up For The Newsletter

This article was originally published on March 24, 2022