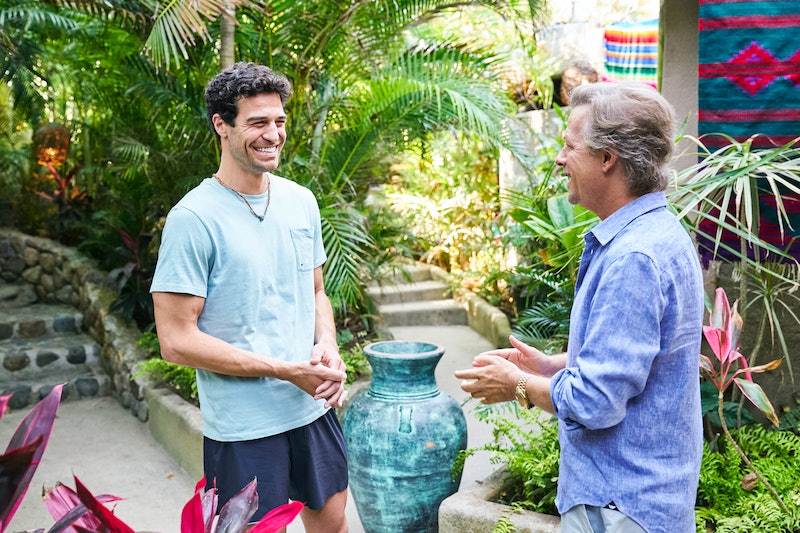 Bachelor In Paradise returning to screens can only mean one thing: drama. Less than an hour into Episode 1, which aired on Aug. 16, and Paradise alum Joe Amabile is already feeling the heat. Season 7 marks Joe’s second time on Paradise, following his Season 5 appearance back in 2018. His first stint on the beach saw him connect with former contestant Kendall Long, sparking a relationship that would last two years before coming to an end in early 2020. Joe’s latest attempt at finding love has already resulted in some tearful confessional interviews and some visible reluctance, but lucky for Joe, the internet has his back.

Joe’s time on Season 7 got off to a fast start. Being one of the first men on the beach, he immediately scooped Serena P. for a chat. Joe was his typical charming, semi-bumbling, Midwestern self, coming off as clearly smitten, if a little insecure. It didn’t take long before a couple of interviews revealed that Joe was having some trouble acclimating to Paradise, feeling intimidated by some of the men, and feeling a little underdressed in his T-shirt and shorts.

Joe even took to Twitter during the episode to assure the audience, albeit unconvincingly, that he was remaining calm. However, near the midpoint of the episode, it became clear that Joe was on the verge of a meltdown, constantly taking breaks on the beachside day beds. In another interview, Joe seemed distraught, especially when speaking about his conversation with Serena P., which reminded him of talking to Kendall.

Having remained an internet favorite since his first appearance in the franchise, Bachelor Nation rallied around Joe during his time of need.

For all the Pro-Joe sentiment, however, some fans were a little shocked at how quickly he began to spiral.

And some fans couldn’t help but share their sympathy for the Paradise alum.

Despite all the confusion and sadness following Joe’s near meltdown, the prevailing sentiment from the internet was that of love for the Chicago native.

Episode 1 was certainly an emotional rollercoaster for Joe, but given what we’ve seen in the trailer, it’s more than likely that he’ll be around for a while this season. So while he could get his opportunity to find love, there will likely be some more tears in the process.