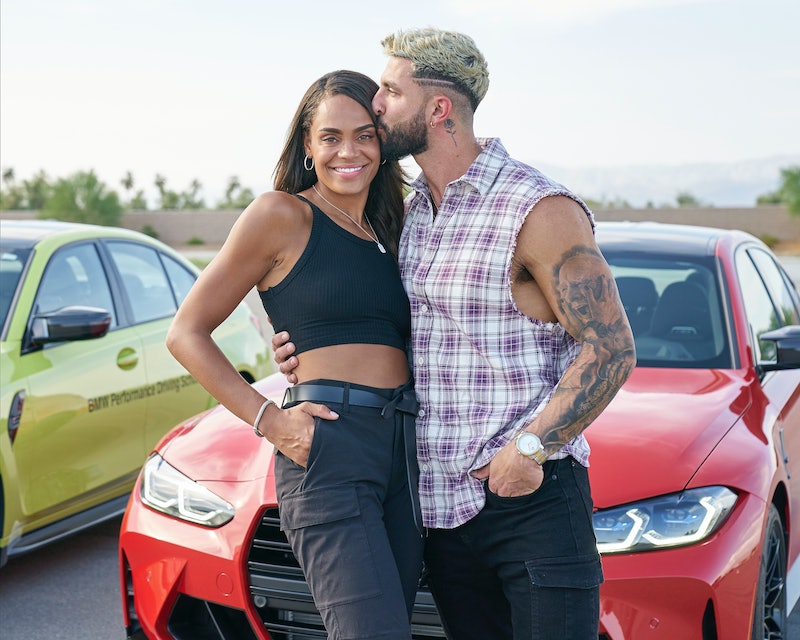 Martin lost to Michelle during their Nov. 9 racetrack one-on-one date, but he was nothing but speed when it came to bringing up Jamie moments later — and, inexplicably, defending the fallen suitor. “I was like, I don’t think he’s a bad person,” he told Michelle. “I still think he’s a hell of a man.” Did he... want Jamie to stick around? Would he rather Jamie be hot-tubbing it up with Michelle right now?

The fitness entrepreneur briefly acknowledged how ridiculous it was for him to talk about Jamie in that moment (“I can’t get mad at you getting rid of somebody when I’m here too,” he said), but the awkward conversation pointed to a bigger issue for Michelle. “I also, in this situation, need somebody to trust me and my decision-making because I am a strong woman,” she explained. Back in dry clothes for the second half of their date, Martin tried to muster up an explanation, citing his parents’ communication skills (or lack thereof) as the reason for his bluntness earlier on.

“Growing up, I never had somebody in my family that I could just turn to and talk about my emotions,” he said. Apparently, the apology was good enough for Michelle. She liked how quickly Martin responded to her concerns and ended up giving him a rose. “When I speak to you about something, there’s a change that’s applied so quickly,” she said, “and I think that’s not very common.”

Of course, Twitter (as usual) wasn’t quite as quick to forgive the drama. Here are the best memes and tweets about Michelle and Martin’s awkward date — and all the pleas to send him home.