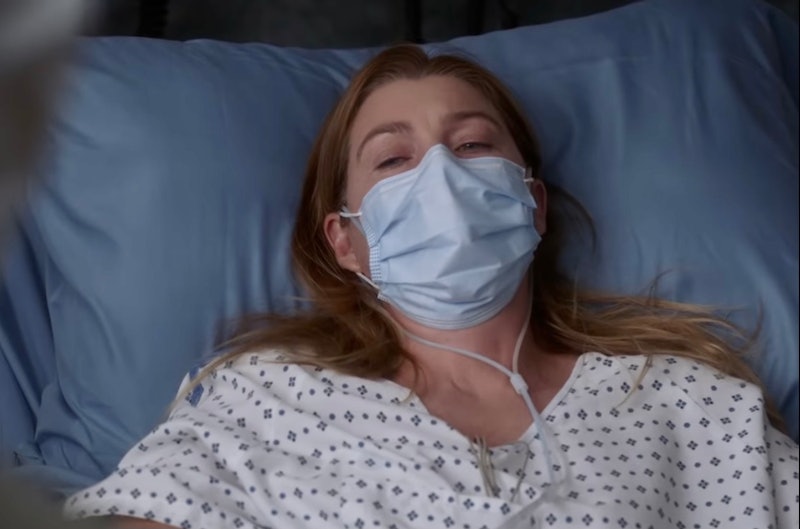 Spoilers ahead for Grey's Anatomy Season 17, Episode 11. After weeks of unconsciousness, Meredith finally woke up in Grey’s Anatomy’s April 8 episode. But she’s not out of the woods yet. As Richard Webber warned, “Great news doesn’t matter if she’s too weak to stay awake.”

Not only was Meredith only conscious for a few minutes, but viewers also had to wait almost the entire episode to see her eyes open — despite the fact that the moment had already been teased extensively. There were no beach scenes or character returns in this episode either, so naturally, Twitter had thoughts.

Though everyone is thrilled that Meredith is awake after coming off a ventilator, nobody can seem to figure out why it didn’t happen sooner in the episode. One explanation, perhaps, is that it gave Jo Wilson time to have a heart-to-heart with her mentor about switching specialties. “Since Alex left, my house hasn’t been my happiest place, so I want work to be,” Jo reasoned with a still-unconscious Meredith. “I am so grateful to you because you believed in me before I believed in myself. And I will tell you all of this again when you’re awake. Please, please be awake soon. Please be well soon.”

Just because Meredith couldn’t respond at the time didn’t mean she wasn’t listening, though. Just over 45 minutes into the hour-long episode, the famed surgeon awoke with Richard at her bedside. Her first words were “I’m sorry,” followed by some weak coughing. After apologizing to Richard for having to “make the call” to put her on a vent, he replied, “I’d do it again if I had to. But I hope I don’t.”

To cap off the love fest, Meredith said she was glad she chose Richard as her health care proxy, but that they needed to “talk about Wilson.” Even in a hospital bed — fresh out of a coma, no less — Dr. Grey is more concerned with keeping the hospital running smoothly and her people happy.

Those were the only words Meredith spoke in the episode. “Her energy’s low. She’s still mostly sleeping,” Richard updated Maggie in the final scene. “She’s listening. Even when you think maybe she’s not, she’s...” Before he could finish his sentence, Bailey jumped in with “extraordinary.” Maggie threw “unstoppable” into the mix, leaving Bailey to have the last word: “always has been, always will be.” As Richard concluded, “I pray to God you’re both right.”

It was a sweet moment, but fans on Twitter really wanted to know what took so long. Leaving Meredith unconscious for a majority of the episode left many wondering why they were deprived of another beach reunion. Some even would have settled for more Derek beach scenes, of which there have already been plenty.

Meredith still has a hard journey ahead of her. While some fans are worried about Meredith finding out about what happened to DeLuca, others are concerned that her recent progress is another fake-out. The promo for Episode 12 didn’t preview any more speaking scenes for Meredith, though it did show her being wheeled into the hyperbaric oxygen therapy chamber. One tweeter even got nostalgic, pointing out that Meredith was with Alex the last time she was in the infamous chamber.

Regardless of what happens next, Grey’s fans can all agree that good news is always welcomed at Grey Sloan Memorial.

More like this
Everything To Know About 'And Just Like That...' Season 2
By Jack Irvin and Grace Wehniainen
Twitter Simply Couldn’t Cope With The ‘Happy Valley’ Finale
By Sophie McEvoy
Twitter Is Burning As Phoebe Dynevor Reveals Daphne’s 'Bridgerton' Exit
By Sophie McEvoy
Netflix Shut Down 'Bridgerton' S3 Rumours About A “Very Dark” Storyline
By Bustle
Get Even More From Bustle — Sign Up For The Newsletter
From hair trends to relationship advice, our daily newsletter has everything you need to sound like a person who’s on TikTok, even if you aren’t.