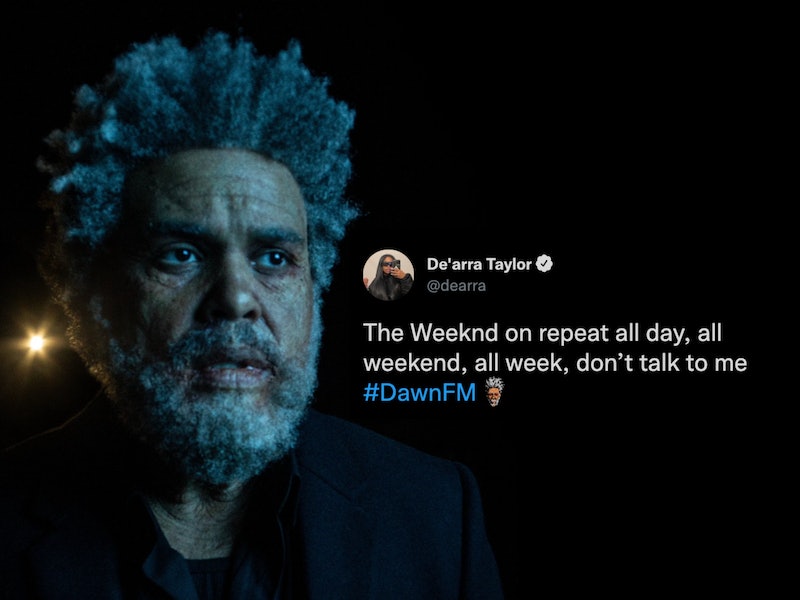 Here we go ... again. The Weeknd just unleashed what will surely go down as one of the best albums of the year. Not long before the Jan. 7 release of Dawn FM, the three-time Grammy winner surprised his fans when he told them that he would release his fifth studio album during the first week of 2022. Now, music lovers can’t stop talking about it, with countless fans on social media sharing their favorite songs, feeling all the feels about the deep lyrics, and posting memes.

Dawn FM is another ’80s-inspired mix of electro-pop club bangers and dark R&B, keeping the acclaimed sound he chose for his previous album, After Hours, going. The album features hip-hop musicians Tyler, the Creator and Lil Wayne, as well as spoken interludes from Quincy Jones and Jim Carrey. Throughout the 16 songs featured on the project, The Weeknd sings about love, loss, and even Scream queen Neve Campbell (on the track “Here We Go ... Again”).

Everything about this music era is weird, insanely catchy, and ultimately, fantastic, including the new music video for “Sacrifice,” which came out hours after the album dropped.

Here’s what people on Twitter are saying about Dawn FM.

A Lot Of Coke Talk

Album Of The Year

OK, These Are Just Funny