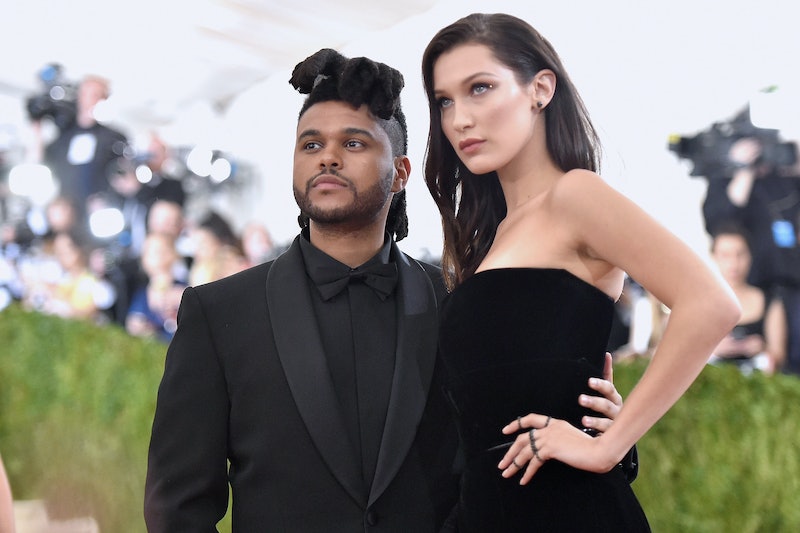 There's nothing like an on-again, off-again relationship to get the creative juices flowing. And fans are so enamored with this new album, they're confident that The Weeknd's After Hours album is all about Bella Hadid. The singer dropped the album on March 20, and nearly every single one of the 14 tracks could be interpreted as addressing his relationship with the model.

The Weeknd and Hadid were first linked in 2015, but there has been a lot of breakups and reconciliations in that timeframe. And the lyrics in After Hours sure seem to reflect that ongoing love and heartbreak. In the song "Heartless," The Weeknd makes it very clear that he's currently single, as he states there's no wedding planning in his near future. But there was a time when he and Hadid were quite committed to one another. They initially dated from 2015 to 2016, then got back together in 2018 for a year before calling it off in August 2019.

Though there was speculation that the pair was back together in October 2019, they quickly squashed those rumors. The Weeknd also dated Selena Gomez in between his time with Hadid, so there are some theories that the "Rare" singer also is referenced on After Hours. But here are just some of The Weeknd's new lyrics that seem to be all about Hadid.

On "Too Late," The Weeknd seems to be unimpressed with the media speculation that surrounded his and Hadid's relationship with the line, "Sources say that we're done, how would they know?" He could be very well referring to when the pair made headlines in October 2019 with E! reporting they were back together, followed by The Weeknd's rep telling People they are just friends.

Due to the back-and-forth nature of their relationship, he might be singing about Hadid on "Hardest to Love" when he sings, "You try with me so many times ... And what we had is dead inside." Even if he's not, "Hardest To Love" is undeniably about a brutal breakup.

Coachella is allegedly where he met Hadid for the first time in 2015 and when he performed at the music festival in 2018, the exes were reportedly spotted kissing. (Hadid denied the claims, but they did get back together afterward.) So while The Weeknd has also spent time with Gomez at Coachella, the "Snowchild" line, "She never need a man, she what a man need/So I keep on falling for her daily/We was at Coachella going brazy," seems more directed at Hadid — especially since fans also think they can hear Hadid giggling on the track.

Need some more specificity from The Weeknd? Well, look no further than "Escape From LA" with the lines, "She a cold-hearted b*tch with no shame/But her throat too fire/She got Chrome Hearts hangin' from her neck." Hadid frequently collaborates with the fashion brand Chrome Hearts, so it sure seems he's talking about his model ex-girlfriend on this one.

On "Save Your Tears," The Weeknd may be referring to an incident the allegedly happened in August 2019 when he sings, "I saw you dancing in a crowded room/You look so happy when I'm not with you/But then you saw me, caught you by surprise/A single teardrop falling from your eye." TMZ reported that Hadid had been at a club and when her ex arrived separately, she left minutes later. While no tears were reported, she might have been caught by surprise by his appearance since they had just broken up again weeks before.

The Weeknd hasn't stated that any of these songs are actually about Hadid, and he may never explain the inspiration behind his art. But that won't stop fans from believing that Hadid has left her mark on After Hours.