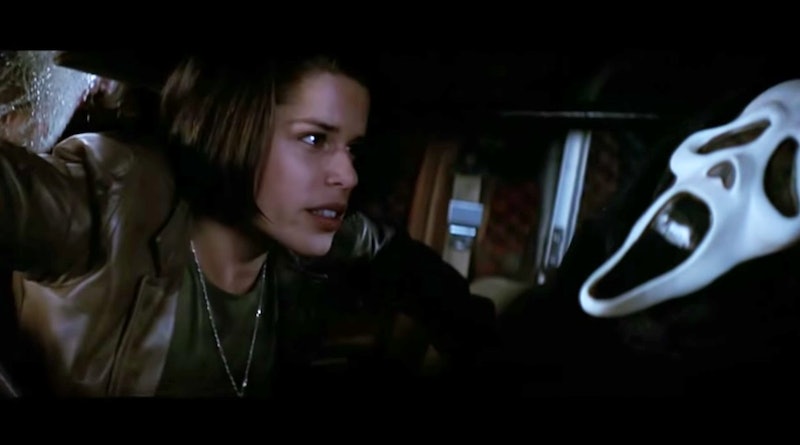 Dimension Films
By Allyson Koerner
May 7, 2020

It's once again time to ask the question: What's your favorite scary movie? That's right, Scream 5 is in the works, Neve Campbell confirmed to Entertainment Tonight on May 6. According to the actor, who's starred in all four movies in the leading role of Sidney Prescott, there are talks happening. She's even been approached by two unnamed directors who, she said, "have such a great respect for Wes Craven" and "want to honor his work." (Craven died in August of 2015 after battling brain cancer.)

Of course, nothing is happening right now due to COVID-19 and it's still developing shockwaves, but Campbell admitted "conversations are being had." As she told ET, "I wasn't sure it was going to happen and I was approached six weeks ago, but the timing's not great right now, obviously. We're starting conversations, we're starting negotiations, but who knows how and when studios are going to open again."

Even David Arquette, who played Dewey Riley in the Scream franchise, told ET he would be down to reprise his character again. "Oh it would be exciting!" he admitted. "I love playing Dewey so I would always love to be a part of it."

There's been talk of a Scream 5 since 2013. The last time fans saw Sidney and Dewey was in 2011's Scream 4, which also included Courteney Cox reprising her role as Gale Weathers and many other famous faces, including Emma Roberts who played Sid's niece. Lucy Hale, Kristen Bell, Hayden Panettiere, Adam Brody, and Rory Culkin also joined the fourth installment.

There's no denying OG Scream fans will always love to see Campbell and Arquette play Sidney and Dewey. (Keep those fingers crossed Cox would also return as Gale.) After Scream 4, it's hard to imagine that there's much left to tell in Sid's story (no spoilers!), but there's no stopping Ghostface and those who can't help but wreak havoc on her life.