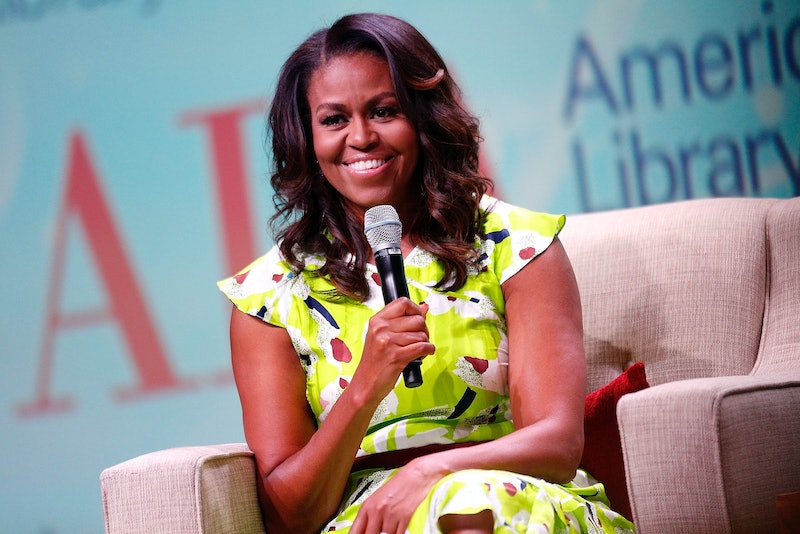 Michelle Obama knows it takes a lot of strength to deal with menstrual issues — and she wants men to learn that as well. While speaking with her friend, D.C.-based OB-GYN Dr. Sharon Malone, Michelle Obama joked that men could never handle menstrual cramps in a conversation about women's health issues on the August 12 episode of The Michelle Obama Podcast. The former First Lady got candid when she described the pain that can accompany menstrual cramps, and how women are expected to simply carry on with their lives despite being in deep discomfort.

"How many men, do you think, could deal with the severest form of cramps," Obama wondered, before describing them as feeling like "a knife being stabbed, and turned and then released. And then turned! And then released." She then explained that women who are dealing with such intense cramps often have to suffer through their cramps and continue on without complaining about their pain.

"And you got to do that, and you got to get up and keep going," Obama said, emphasizing her point with a snap. "It's like, go to work, go to school, go play on the basketball court. Every woman who's playing a sport now is doing it through all those circumstances. And I don't know any men who could possibly conceive of what that feels like."

In addition to getting real about cramps, Obama also opened up about experiencing great fluctuations of her hormones over the course of her life, and how they affected her when she went through menopause. "I too am a hormone taker ... and also, you know, well I was experiencing hormone shifts because of infertility, having to take shots and all that," she said. "I experienced the night sweats, even in my 30s, and when you think of the other symptoms that come along, just hot flashes, I mean, I had a few before I started taking hormones."

The former First Lady also recalled experiencing a hot flash while on Marine 1 with her husband, former president Barack Obama, right before a big event. "I remember having one on Marine 1," she recalled. "I'm dressed, I need to get out, walk into an event, and, literally, it was like somebody put a furnace in my core and turned it on high, and then everything started melting. And I thought, 'Well this is crazy, I can't, I can't, I can't do this.'" Thankfully, Obama says her openness about her own experiences with menopause helped her husband to be accepting and accommodating to the women in his cabinet when they, too, dealt with hot flashes in the White House.

"Barack was surrounded by women in his cabinet, many going through menopause and he could see it, he could see it in somebody, 'cause sweat would start pouring, and he's like, 'Well, what's going on?' And it's like, no, this is just how we live," Obama recalled. "You know, he didn't fall apart because he found out there were several women in his staff that were going through menopause, it was just sort of like, 'Oh, well turn the air conditioner on.'"

Ultimately, Obama explained that she believes its important for all women to be open about the health issues they face, in order to fight the stigma of talking about things like hormones, menstruation and menopause. "When you think of all that a woman's body has to do over the course of her lifetime ... the changes, the highs and lows and the hormonal shifts, there is power in that," Obama said. "But, we were taught to be ashamed of it. And to not even seek to understand it, or explore it for our own edification, let alone, to help the next generation." Hopefully, her conversation will encourage other women to speak up about their own issues going forward.