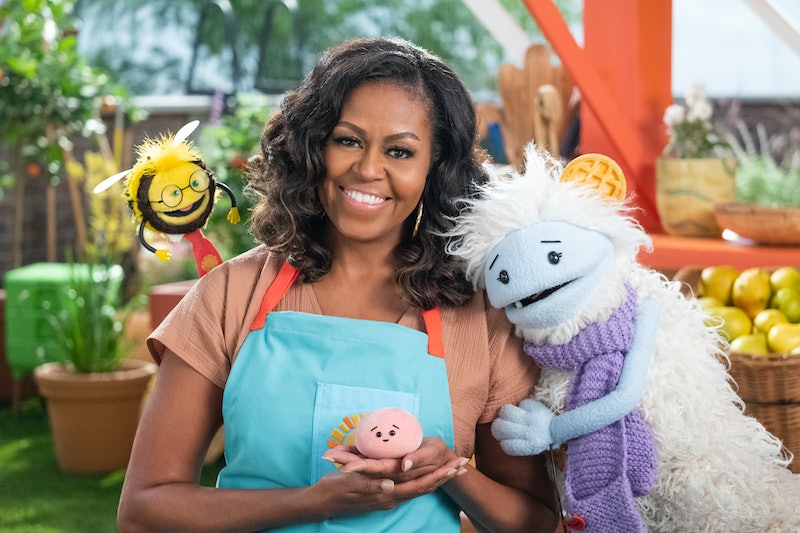 The Obamas first announced their production company, Higher Ground Productions, and subsequent multi-year deal with Netflix to produce documentaries and feature films in May 2018. Since its launch, Higher Ground has produced three documentary films for the platform: American Factory, Crip Camp, and Becoming, partially based on Michelle Obama's memoir of the same name. On Feb. 9, the former First Lady announced her next project, a cooking program titled Waffles & Mochi, set to launch on Mar. 16, 2021, with ten episodes that make up Season 1.

"I’m beyond thrilled to share that on March 16, I’ll be launching a new show on Netflix called Waffles + Mochi," she wrote on Twitter alongside a promotional photo. The pic shows her smiling alongside three puppets: a glasses-wearing bumblebee, a smiling mochi ball, and a fuzzy blue character with a waffle on its head. If the fluffy characters didn't make it clear, this series is primarily for children. But this is Michelle Obama we're talking about, so everyone will want to tune in. "I'm excited for families and children everywhere to join us on our adventures as we discover, cook, and eat delicious food from all over the world," she said.

Obama continued with a follow-up tweet, writing, "I’m also excited to work with Partnership for a Healthier America to help kids build healthy habits and help families in need cook with fresh ingredients together at home. I hope you'll join us by watching on March 16!"

Here’s everything we know about the new kids series, including whether or not former President Barack Obama will make a cameo.

What is Netflix’s Waffles & Mochi about?

Netflix offered a first look into the show through its Strong Black Lead platform, referring to it as "the first original preschool series from Higher Ground." Per a thread on Twitter, the show follows Waffles and Mochi, two characters who "go on food adventures all over the world" with the Becoming author. The two main plush characters come from "the land of frozen foods" and embark on "global ingredient missions" with Obama, who plays a supermarket owner. "Whether they’re picking potatoes in the Andes of Peru, sampling spices in Italy, or making Miso in Japan, these curious explorers uncover the wonder of food and discover every meal is a chance to make new friends," writes Netflix.

With showrunners Erika Thormahlen and Jeremy Konner (brother of Girls co-showrunner Jenni Konner) on board, Waffles & Mochi is presumed to be a rework of Higher Ground's Listen to Your Vegetables and Eat Your Parents series.

Of course, this isn't her first foray into the topic of children's nutrition. During her husband's first term as president, she launched Let's Move! in 2010, an initiative to combat childhood obesity by encouraging healthy lifestyles filled with exercise, a nutritious diet complete with fruits and vegetables, and improved access to such foods. The program got over 5,000 schools to increase their nutrition and fitness standards, helped build and refurbish over 6,000 tennis courts for children across the country, and even received a theme song titled "Move Your Body" by none other than Beyoncé.

Who’s in the cast and will Barack Obama appear?

Joining the colorful world of Waffles & Mochi will be a group of renowned chefs and A-list celebrities, including Zach Galifianakis, Stranger Things’ Gaten Matarazzo, Jack Black, Rashida Jones, Common, Tan France, Sia, Mandy Moore, Samin Nosrat, José Andrés, and Massimo Bottura. There’s no word on whether former President Barack Obama will make an appearance in the series. But considering he’s also involved in the couple’s Netflix deal, a cameo is not out of the question.

What about the puppets?

A variety of puppet pals are set to make appearances in the first 10 episodes of Waffles & Mochi. But the stars of the show are undoubtedly Waffles (who is a cross between yeti and frozen waffle) and Mochi (a strawberry ice cream-modeled puppet with its own distinct dialect). In some ways, the puppets represent the show’s comfort food-meets-cultural cuisine approach.

Is a second season of Waffles & Mochi coming?

Season 2 of Waffles & Mochi has yet to be confirmed. But, according to Obama, it appears she’d be open to more installments. "First of all, I'm not an actress, so Waffles + Mochi is an easier lift for me because I'm being myself," she said for a recent issue of People. "And it got me back into the space of kids and healthy eating and introducing them to vegetables... what we talked about for eight years in the White House. Whereas Bridgerton, the love scenes — I don't know. I'd pass," she said, jokingly referencing the steamy Netflix period drama.

More like this
Devi Is Going To Meet A “Smoldering Bad Boy” In ‘Never Have I Ever’ Season 4
By Jack Irvin and Gabrielle Bondi
Ed McVey Shares A Surprising Connection With Eddie Redmayne
By Catharina Cheung
The First Clip From Netflix’s Queen Charlotte ‘Bridgerton’ Prequel
By Bustle Editors
The ‘Emily In Paris’ Season 3 Release Date Is Here, Plus The First Footage
By Bustle Staff
Get Even More From Bustle — Sign Up For The Newsletter