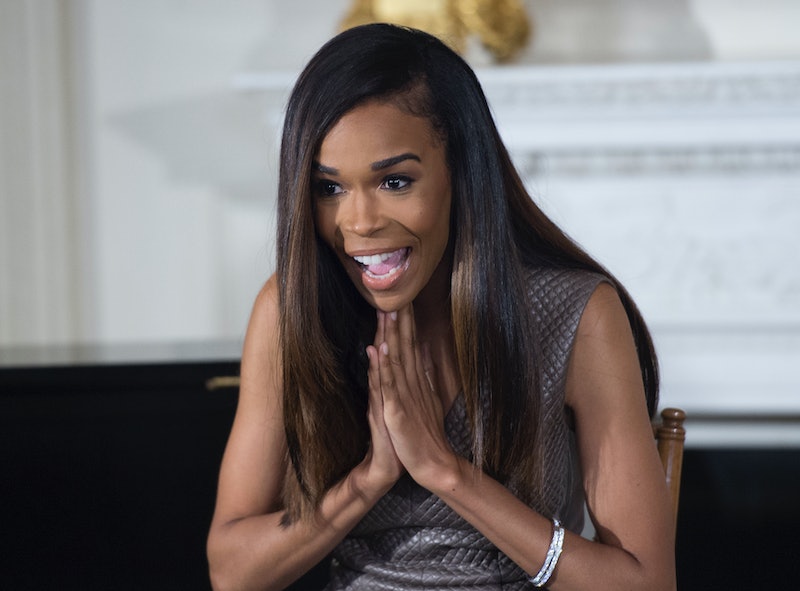 Michelle Williams may not appear in Black is King, but that isn't going to stop her from celebrating one of her best friends' success. Shortly after the Destiny's Child singer shared a post about Beyoncé's new visual album on Instagram, Michelle Williams explained why she doesn't appear in Black is King — sort of — by firing back at a commenter who asked about the reason she didn't make a cameo.

Williams — who was part of Destiny's Child from 2000 until they disbanded in 2005 — shared screenshots from the Disney+ film on her social media account on Monday, where she praised the film and Beyoncé. "When you’re trying to figure out what your favs are from #BlackIsKing!" the singer wrote, alongside photos of Beyoncé from various music videos in the film, including shots from "Mood 4 Eva" and "WATER." In the comments, as noted by Just Jared, a fan reportedly asked where Williams was in the film, to which she responded, "I’m in the upper right corner minding my business!" (Williams has since turned off all the comments on the post.)

While Williams was not in Black Is King, her Destiny's Child bandmate Kelly Rowland does appear in the visual album, twice. She made a very brief cameo in "Mood 4 Eva"; later, she appeared in "Brown Skin Girl" where she laughs and hugs Beyoncé in the video. (Rowland also gets a shout out in the song's lyrics.)

Even though Williams didn't appear in Black Is King, the former members of Destiny's Child have been very open about their long-lasting friendship, with Beyoncé even asking Williams and Rowland to perform with her at Coachella in 2018. "We are in touch all the time, whether it’s going to dinner or something like that," Williams told Cosmopolitan in April 2018. "I just remember Bey on the phone being like, 'Hey, I’m doing Coachella, I’d like for you to be part of it.' And it’s like, of course. Of course. When it comes to my girls, I’m going to be there as best as I can, as much as I can."

Around the same time, Williams told the Los Angeles Times that she, Rowland and Beyoncé had all promised to support each other's projects, and planned to honor that commitment no matter what. "I think because we have a relationship off the stage that’s so easy and fun, that chemistry ignites when we’re together," she explained. "We’ve kept to our word back in the early 2000s, when we went on our first hiatus — we said that we would always participate in each other’s projects in whatever capacity we could."

More like this
Twitter Is Saying The Same Thing About Beyoncé's Renaissance World Tour
By Shahed Ezaydi
How To Buy Tickets For Beyoncé’s UK Renaissance Tour Dates
By Shahed Ezaydi
Beyoncé Just Announced Tour Dates: Here's How To Cuff Tickets To Her 2023 Shows
By Jake Viswanath
Twitter Is Having A Meltdown Over Buying Beyoncé Renaissance Tour Tickets
By Jake Viswanath
Get Even More From Bustle — Sign Up For The Newsletter
From hair trends to relationship advice, our daily newsletter has everything you need to sound like a person who’s on TikTok, even if you aren’t.